Tech titan Michele Romanow, who co-founded Buytopia.ca among others, shares her career advice for women in business. 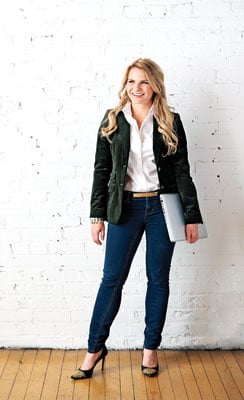 Michele Romanow is a serial entrepreneur who started three companies before her 28th birthday. Her latest venture, the e-commerce company Buytopia, has ballooned to 2.5 million subscribers nabbing deals on everything from vintage designer bags to spa treatments.

She started the company with a couple of friends and earned $10,000 on the first day of sales. “I knew I had something interesting!”

Michele, who studied engineering at Queen’s University in Kingston, Ont., is a metrics geek rather than a shopping freak. But ultimately some of her greatest wins have been about trusting her gut. “In the first year we had $13,000 left in the bank and we bought a $6,000 print ad. I thought, ‘If no one buys after that, I’m in a lot of trouble.’ That was enormous. We’ve always been gutsy.”

In the past year alone, Michele has taken over seven smaller competitors and created an app. Her newest brainwave is a grocery couponing app called SnapSaves. “Rather than having to redeem a coupon in-store, when shoppers know that a product is $2 off, they can buy it, photograph the receipt and upload it. Then $2 is deposited into their account. It’s an elegant solution.”

Power play: Buytopia has saved subscribers over $100 million in the past two years on brands as varied as Staples, Netflix and Porter Airlines.

Words of advice: “Women need to just take a deep breath and take risks early on to start companies, try different ideas, learn to adapt and pivot, and get over the fear of failure.”