Lilia Fraser on starting one of Canada's award-winning breweries

The Russian native co-founded Pump House Brewery with her husband over a decade ago — and now their brews are regarded as some of the best in the country. 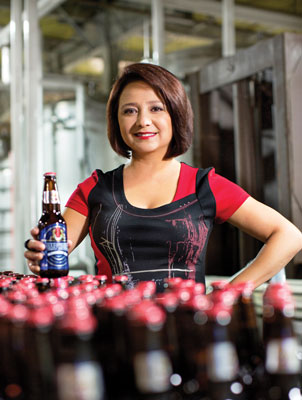 Russian-born Lilia Fraser didn’t know much about beer. (Vodka, sure.) Then she met her husband, a Canadian who was installing equipment at a brew pub in Kazakhstan. She returned to Canada with him, and the couple set about planning their own brew pub and restaurant in Moncton, N.B., his hometown.

Back home Lilia worked as a secret-police officer. (“It was very interesting,” she says. “Very male-dominated.”) In Canada she took a job at a mall jewellery store, pursuing business and bartending courses on the side. “I had grown up in a socialist country, so there wasn’t much entrepreneurship,” she says. “In the beginning I really struggled with the language, but as I started to understand things, I became more confident.”

Lilia and her husband opened Pump House Brewery in 1999 and started serving their own brews, testing them on their customers before deciding which were the most popular. Their Blueberry Ale is their bestseller and is shipped across Canada. They now have two pubs and a beer-bottling plant. The couple’s next projects include a distillery and a vineyard.

Shining moment: “I had a dream of people lined up to get in the door. Six weeks after we opened, my husband called to say, ‘There’s a lineup.’ We’ve had one ever since!”

Words of advice: “Work on a business plan not for the bank, but for yourself. You have to crunch the numbers to ensure you don’t miss minor details: What about trash? Uniforms? We laid out the whole scenario for three years.”