Why Krista Strating's job is so fierce...

She’s the number one female tree climber in North America and, yes, she has fallen; no, she’s not a lumberjack; and it’s true, being the only girl on the job really isn’t so bad. 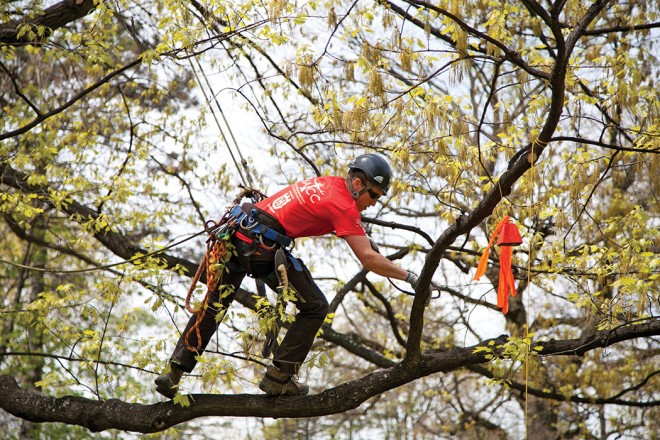 An ISA-certified arborist, Krista demonstrates her climbing prowess at the North American Tree Climbing Championships. “The events are timed, but you also get points for making it look effortless.” Photo, Megan Strating.

One of the questions Krista Strating gets asked most often is “Have you ever fallen out of a tree?” She has, in fact. Krista was eight years old and chasing June bugs in her backyard in Burlington, Ont., when she pursued the evasive insects up into the branches of a Norway maple. “I grabbed a dead branch and fell about 10 feet,” she says. “My parents called an ambulance because they thought I’d broken my back. It was awful, but I was okay. And I still kept climbing trees after that; it didn’t really faze me.”

That was the last time Krista lost her footing so far above ground, which is actually quite remarkable, considering she might climb as many as 10 trees on an especially busy day. The 30-year-old certified arborist and tree worker is five foot nine and long of limb. She’s also the number one female climber in North America, after winning the 2014 North American Tree Climbing Championships in Pasadena, California, this spring. (Her proudest achievement, she says. Plus, she won a chainsaw.)

Krista is in a job almost exclusively occupied by men: Of the 20 tree workers at the City of Mississauga Forestry Operations, she is the only woman. “I love working with guys; they’re so easy to get along with.” Conversations generally revolve around sports, fishing and hunting. “Sometimes they ask me for advice on their relationships.” The only problem she’s encountered working in an all-male environment is that she does get treated differently, although more often by clients than by colleagues. “When I was running a crew and working at private residences, clients often walked right past me to ask one of my co-workers questions. The guy, who was usually new, would just give them a blank look and tell them to talk to me. And I’d be thinking, ‘You actually do want me doing it, because that guy doesn’t know anything.’ ”

Growing up, Krista wanted to be a police officer. “I thought it would be nice to be able to help people. I’m a fairly calm person, which I thought would be good for that kind of work.” Her father was a truck driver, her mother a stay-at-home mom. When she was a kid, Krista climbed trees and built tree forts with her brother and two sisters. “I was never afraid of heights,” she says. After high school, she worked for a landscaping company, cutting grass and pruning shrubs to pay for college, where she was studying horticulture. But then her best friend got engaged and Krista found herself paired up with an arborist for the ceremony — not because they shared a passion for plants, but because they were the two tallest people in the wedding party. He sized her up during the rehearsal dinner and offered her a job.

Typically when someone enters the field of arboriculture they start out on the ground, dragging branches and chipping brush until they’re certified. “It’s like a reward; if you’re good on the ground, you get to climb.” Krista was climbing within her first week at work. “In the arboriculture trade, there are plenty of consulting jobs and plant health-care work you can do, which is where you find most women. But I’ll do that when I’m old and have arthritis — I want to climb while I’m young.” Krista even finds bucket work (from a cherry picker) dull, preferring to be right in there, balancing among the branches.

“I’ve always loved trees, but then I started learning about their biology — it was fascinating: how they grow, how they defend themselves from pests, the way a tree heals over its wounds when it gets cut. To be able to work with them every day is incredible, plus there’s the adrenaline of climbing.” Krista’s favourite trees to prune are honey locusts (they have a lot of deadwood that is immensely satisfying to clear out), and she admires the sculptural, vase-like shape of the American elm. But her favourite tree to climb is the red oak. “It has long branches with spaces in between so you can really swing around up there, which is kind of fun.”

Fun, perhaps, yet as professions go, climbing trees is not without its occupational hazards. “I’ve been in some sketchy situations,” Krista says. “Like during the ice storm last winter when I was climbing trees full of ice. It was a little scary because branches were popping and breaking all around me. One tree we worked on was in the backyard of a daycare. We needed to make it safe so that branches wouldn’t fall on the kids.” That’s what’s cool about the job, she says: protecting the trees, protecting the people who pass beneath them.

Krista says that tree climbing is a lot like rock climbing, something she does once a week for recreation. Her work uniform includes a harness, carabiners, climbing rope, steel-toed boots, heavy gloves, a hard hat and protective, chainsaw-resistant pants. “You have to position your body so you won’t get hit by the saw, but also not by the branch that you’re cutting. If your foot slips off the branch, you could fall face first on your saw — so you really make sure you’re comfortable before every cut.”

For tree workers like Krista, there are three competitions a year in which each event mimics things she might do on the job. One is an aerial rescue, where climbers race up a tree to rescue a dummy. Krista has yet to meet a climber who has had to rescue a person; rescuing cats is much more common. “It’s usually pretty awful. You have to somehow get them in a bag, and you can really get scratched.” Krista’s favourite competitive event is the work climb. Climbers begin at the top of a canopy, completing different tasks all the way down. “You have to zip from one challenge to another, ringing a bell after each one. There’s a station where you need to use a pull saw and another where you have to grab a stick and hit a target on the ground.” It’s a tree full of tests that highlight what she does every day, whether it’s clearing a canopy over a sidewalk or removing dead branches to keep trees healthy. “Trees clean the air, hold the soil together on slopes and create habitats for animals,” she says. “That’s why it’s so important to take care of them.”

Krista says the biggest misconception about her job is that people think she’s a lumberjack. “My friends will introduce me and say, ‘This is my friend, she cuts down trees.’ But people don’t realize how much we really care about the trees. When you’re up in the canopy and you’re surrounded by this living being that’s been there longer than you’ve been alive, it’s just a really cool experience. And every once in a while I need to actually stop and think about that.”