Ms. Chatelaine for the month of April never dreamed she’d make it in Manhattan — but after a stint at Vogue, she’s done exactly that 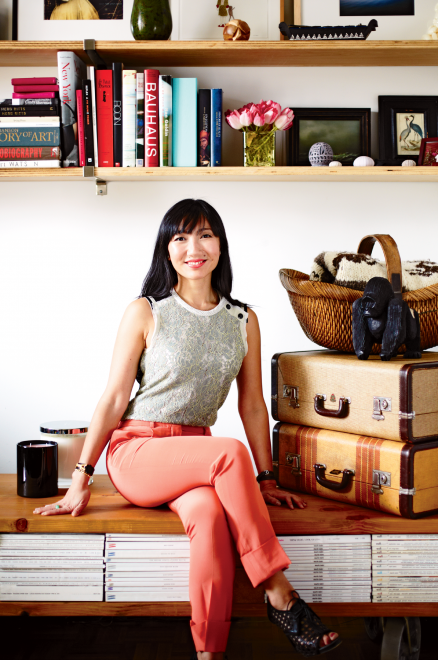 Perky and pint-sized, Ying Chu has one of the biggest jobs at one of the biggest magazines in the world. As the beauty and health director at Marie Claire, what she puts on her pages can make or break a new cosmetic, lotion or potion. Ying keeps things in perspective: “We all know that products aren’t going to give us the results of a facelift, but there are ingredients and technologies that make a difference. It’s ultimately a feel-good industry.”

Ying’s job comes with pressure to stay on top of science and trends. “If you take a breather, you feel like you’re behind,” she says. “Especially now, everything’s so frenetic. It’s not just a print magazine: There’s blogging, tweeting, TV appearances, iPad apps. . . .” When it comes to work-life balance, she fits personal stuff in where she can, working out in the mornings and seeing friends for movies, exhibitions and dinners after office hours.

“I have worked hard to get to where I am,” she says. “But I was also very lucky.” Ying scored an internship at Flare in Toronto while studying fashion at Ryerson University. Seven years later her boss was moving to New York to work on a start-up called Suede and Ying jumped at the opportunity to join her. They were exciting times: “Working on a Canadian magazine and then a start-up gave me the chance to get my hands into everything: photo shoots, the market and reporting.”

While Suede didn’t last, Ying caught the attention of Condé Nast and she was soon walking the hallowed halls of Vogue magazine. Friends thought she was crazy when she jumped ship after a year for Seventeen, but a year later she was lured to her current position at Marie Claire.

While New York has become her home, British Columbia — where her parents moved from Shanghai when she was four — is still close to her heart. “It’s so gorgeous. I miss the ocean, the mountains and the trees,” she says. Ying wishes she could spend more time with her family, too, saying, “I’m really close to my mom and dad and feel real guilt about not getting out to see them more often.” A trip is in the cards for the summer, and after that she and her photographer boyfriend, Jason Lindberg, will spend weekends at a cottage they’re building upstate in Sullivan County. That, and a puppy they’re hoping to adopt, should help them get their nature fix a little closer to home.

The last time I lost my temper… I still didn’t get what I was after. Lesson learned.

My favourite moment of the day is… dusk. My office has an incredible view overlooking New York City — twinkling lights, streams of cabs, all of Times Square. It’s pretty breathtaking.

The biggest mistake I ever made was… not learning to write Mandarin as a kid. Turns out Mother was right.

My perfect day would be… a morning hike, a book in the afternoon, an indulgent dinner — in a new city.