How to recover if you get laid off

Our handy tips will help you land on your feet 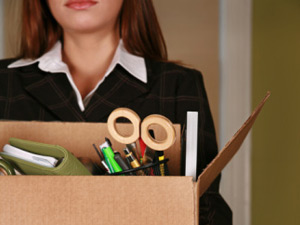 1. Be prepared
When your manager taps you on the shoulder, there often isn’t time to download that glowing performance review or print your latest project. Sometimes you’re barely given time to grab your coffee mug and say goodbye. Officially, what you do on company time belongs to the company. But career experts, such as Alan Kearns, founder of Toronto-based CareerJoy, suggest you should be at the ready for change all the time: Keep a professional contact list at home, and keep your resumé updated and your network active. This is especially true during layoffs, says Elizabeth Armstrong, 36, who was let go by a Toronto-based food company in December, after surviving two rounds of cutbacks last fall. “You have to try to prepare yourself,” says Armstrong, who saw the writing on the wall for her job. “If I were to walk into my job tomorrow and lose it, how would I behave? How would that affect me?”

2. Take a deep breath
Getting a pink slip is an extremely emotional experience. Even in this economy, it can come as a shock. “We’re connected to our work for more than the paycheque,” says Marlene Delanghe, principal consultant with Vancouver-based Career Solutions. “If that ends, it’s a departure that has grief attached.” Take a moment to recognize what you’re feeling – denial, anger, sadness – but remain calm.

3. Accept it
This isn’t the time for arguments or bargaining. This also isn’t the time to scream at your boss, sob on her shoulder or kick cubicle walls. “Remember, unlike a relationship, it’s not personal. It’s business,” says Kearns. The decision has already been made. So remain calm and professional, and walk out with your head held high.

4. Don’t leave empty-handed
Employment standards legislation sets basic rights in each province, including the right to be adequately notified of a layoff or to receive severance pay. Generally, for terminations without cause (for economic reasons, as opposed to performance-related grounds), termination pay depends on how long you’ve worked for the company, up to a maximum of eight weeks. Companies are also required to continue benefits – or compensate for them – throughout that period. Additionally, your final paycheque should include any vacation pay or overtime owing. If you suspect your severance package is lacking, consult a lawyer who specializes in workplace issues. “I would say even more than nine times out of 10, there’s something deficient about the offer,” says Rose Keith, an employment lawyer in Vancouver.

5. Tell it like it is
What do you say to your family? Business contacts? Facebook friends? However you share the news, be honest. “Just say, ‘This is what happened,’?” advises Kearns. These days, says Keith, the stigma of being laid off is disappearing faster than you can say “downsizing.” Look at any headline – the economy shed 213,000 jobs between October 2008 and January 2009, according to Statistics Canada – and know that you’re not alone.

6. Tap your resources
Once the word is out, don’t switch off your phone and hide out with your PVR. Now is the time to plug into your network, making contact with family, friends, former co-workers, business associates, headhunters and professional associations. Keep in regular touch over email with recruiting firms such as Mandrake or Manpower. Do some homework: Assess both yourself and the labour market, says Delanghe, and visit Service Canada to apply for EI benefits. (The number of qualifying hours varies by region.) Federal and provincial governments also offer career programs, as well as retraining resources. If you’re laid off in Ontario, for instance, where the manufacturing sector has been hit hard, the government can help finance training (costing up to $28,000) in fields where demand for labour is higher, such as nursing, bookkeeping and social-service work. There’s also help available for starting a business.

7. Let it go
When you feel you’re ready, start anew. “You have to stay positive, because that reflects in everything,” says Armstrong. Delanghe, who first got into the career-consulting business after seeing her mining employer lay off half of its staff in a few short months, says this is the time to ask yourself some key questions: Did you like your job? How close was it to your ideal job? “I’ve seen people reinvent themselves, even in one-sector towns. Sometimes in the bad news, there can be a good story.”