Taking the time to make contacts is critical to career success. Our guide will help you do it without feeling like a nuisance 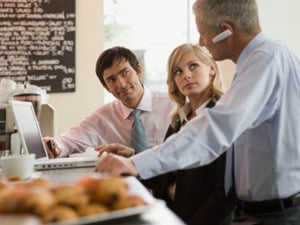 1. Redefine connecting
Forget about the sales pitch and put down that glass of merlot. “Networking isn’t schmoozing,” says Eric Morse, associate dean of programs at the Richard Ivey School of Business in London, Ont. “It’s really about building relationships.” So why aren’t we doing it more? Women haven’t been in the boardrooms?—?or on the fairways?—?for as long as men. Many of us are more comfortable nurturing others than promoting ourselves, say savvy networkers. We’re also wiped out by rushing home to help with homework, make dinner or care for ageing parents. “But how do you find someone to fix a leaky faucet at home? You ask around for a recommendation,” says Sherry Knight, president of a Regina-based human-resources firm, Dimension 11 Consulting. “That’s networking. We never think twice about that. When we’re talking about advancing our own careers, it’s always, ‘Oh, I could never do it.’ But we need to.”

2. Recognize the value
Patrysha Korchinski’s real-estate agent found her a job before she found her a home. Korchinski was moving to Whitecourt, Alta., and had mentioned that she was looking for work in radio sales. Her agent heard about a station starting up and made the necessary introductions; the radio managers, both avid golfers, squeezed in the interview just before tee-off. “I’ll certainly return the favour and steer anyone asking about real estate in her direction,” says Korchinski. Victoria native Kelly Hoey also credits networking for her transition from an attorney to a manager: Following an unsuccessful interview, she kept in touch with the interviewer, who went on to find her a different job three years later. She now runs alumni programs for a law firm in New York and always finds time for others looking to make similar leaps. “The reciprocal benefits of networking may not be immediate,” Hoey says. “But meaningful connections are supposed to be long-term.”

3. Find your network
What’s fair game? Anything and everything: book clubs, alumni associations, volunteer organizations and even private groups like Verity, a women’s business and social club in Toronto where some 700 members trade cards and connections. Whatever you join, the key is breaking out of your work-home rut, says Verity founder Mary Aitken. “Create new relationships with people you don’t know because that will lead you to new ideas, and those new ideas are invaluable.”

4. Set a coffee date
Meghan Wier wanted to meet more people professionally, but at crowded events she always found herself the wallflower. So the author of Confessions of an Introvert: The Shy Girl’s Guide to Career, Networking and Getting the Most Out of Life started scanning membership lists of the groups she had joined and asking for one-on-one meetings. “Most people are happy to talk about their line of work over a latte,” she says. The reward? Ninety percent of her writing business comes from contacts she’s made. Keep the initial conversation general: Ask about the lay of the land in their industry, or necessary skills in the field. “Asking about a job directly can make your source uncomfortable if she doesn’t have one to offer,” says Knight. But don’t shy away from inquiring after more leads. And make sure to send a thank-you note?— handwritten, please?—?when someone has shared her time.

5. Stay in touch
The gal with the most Facebook friends doesn’t automatically win: You have to do something with the connections you’ve made. Take note of a new contact you met at a work-based lunch. Stay in touch with colleagues when a project is over. And keep them at the forefront of your mind. “Networking is about connecting the dots,” says Arlene Dickinson, president of Calgary-based Venture Communications and a judge on CBC’s Dragons’ Den. If you’re sending a great-to-meet-you email, she recommends mentioning something specific about the conversation. Whenever Hoey meets new contacts, she remembers a few things they’re interested in and later emails articles or links that they may find useful. “Every interaction is a networking opportunity, from how you greet people in the elevator to your updates on Facebook, LinkedIn and Twitter,” she maintains. We learn to socialize as children, and it’s important to keep it up, whether you want to improve your work or change jobs, Knight says. “The more people you know, the more options you have when you’re seeking information or a helping hand.”