How Amiee Chan went from co-op student to CEO

The Norsat exec is No. 15 on our PROFIT/Chatelaine W100 ranking, which celebrates Canada's top 100 female entrepreneurs. 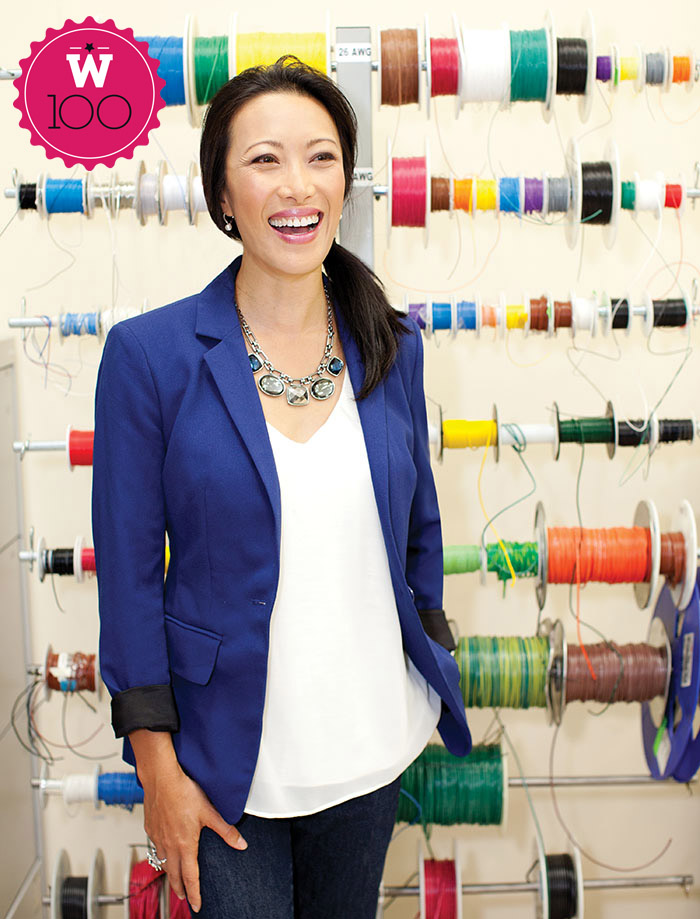 Age: 47
Location: Vancouver
Position: President and CEO, Norsat International
2013 revenue: $30–$40 million
Employees: 160 full-time, 2 part-time
Why we love her: She worked her way up the ladder — from co-op student to CEO.
Best advice: “Always be learning how to be a better leader.”

Amiee Chan joined the Richmond, B.C.-based telecommunications company Norsat International in 1989 — as a co-op engineering student. “My job was to disassemble 400 orange boxes with a screwdriver and replace the circuits,” she says. “My fingers were blistered, and I was out of my mind with boredom when my supervisor told me what they were: a type of rescue beacon that had recently saved a family in Alaska from drowning. That realization inspired me to keep going, and after my graduation, I got a job there.”

Over the next few years, Amiee worked her way up the ranks at Norsat, which provides communications products and services to the likes of NATO, Boeing and Motorola. “When a disaster happens, it’s no longer food and water they bring in first, it’s communication solutions,” she says.

Her interest in technology came early. When Amiee was eight, she and her family moved from Hong Kong to Vancouver. “As an immigrant child, you just desperately want to blend in,” says Amiee. “You want to wear the right clothes and bring the right lunch. But my father told me, ‘If you do what everyone else does, you will never stand out.’ ” That advice resonated. Instead of taking sewing and cooking with the other girls, she opted for electronics — and was instantly hooked. At university, Amiee majored in electrical engineering. “My mother thought that meant driving a train in striped overalls,” she says. “And I think she still thinks that’s what I do.”

In fact, she is a problem solver who saved a sinking business. In 2006, Norsat was on the verge of bankruptcy, with angry suppliers and unsatisfied customers. The board looked to Amiee, then the VP of operations and engineering, and asked, “Do you want to take this on?” With two young kids at home, she thought it seemed risky — but so did walking away. “I thought, ‘There are 45 employees here whose families rely on them. I don’t want the torch to go out on my watch.’ ” Amiee took on the role of CEO and shifted the company’s focus: “Instead of betting on very large contracts, we looked to smaller customers that really needed our products and services.” As a result, Norsat currently brings in more than $35 million a year. “Now the guys who were my supervisors report to me, and they couldn’t be more supportive.”

Today, she tackles complex communications problems: How can people on a boat check their email? How can mining executives 200 metres underground use their cellphones? “We had a military customer doing a peacekeeping mission in Africa whose employees needed a communications strategy not just to stay in touch with each other, but also to keep in touch with their families. We made it happen.”

Meanwhile, Amiee looks for ways to stay connected to her own family, which is challenging, considering the extensive time and travel requirements of her job. “I draw a very solid line between family and work,” she says. “If I have to travel on a weekend, I’ll take a day off in the week to be with them.” Her biggest message to working moms, though, is to go easy on yourself. “You’re going to miss things: school concerts, big games. Don’t beat yourself up about it. Your kids will be fine.”

PROFIT and Chatelaine magazines present the 2014 W100 ranking of the country’s top 100 female entrepreneurs. Collectively, they contribute $1.7 billion annually to Canada’s economy. And whether they are talking about state-of-the-art technology, work-life balance, or taking charge in a male-dominated field, these women inspire and motivate. Join the W100 winners on Nov. 26 at the W100 Idea Exchange. Hosted by editors of PROFIT and Chatelaine, it is a unique opportunity for all women entrepreneurs to come together and share best practices, to learn from management experts about today’s key business opportunities and challenges, and to create personal connections that can last a lifetime.