Heather Cameron on being a modern-day farmer

Ms Chatelaine for the month of March: When life handed Heather Cameron a recession, she literally made lemonade 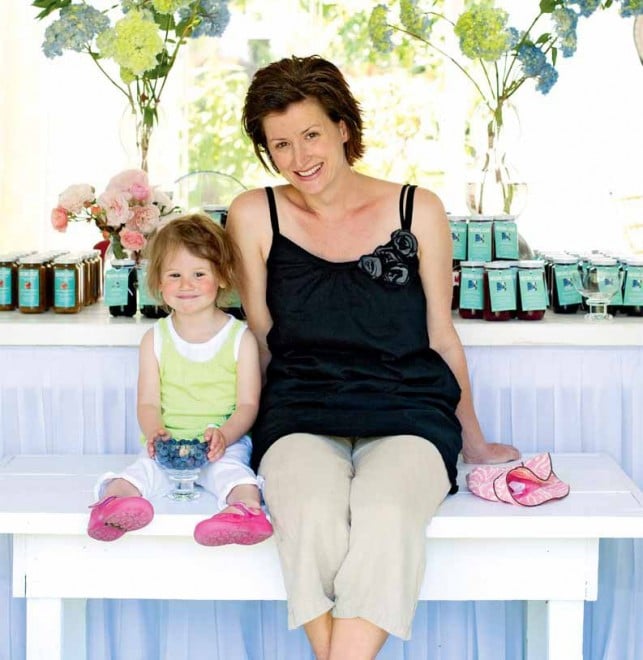 It’s the stuff of fairy tales: Heather Cameron spends her days collecting blueberries from hundreds of thriving plants on her land and making delicious fruit-packed jam by hand. When explaining how this lifestyle came about she says with a laugh, “I wanted to be Martha Stewart!”

Heather wasn’t always a modern-day farmer. After working for a florist, she went on to run her own business arranging flowers for weddings and parties. An ambition to grow her own blooms led her and her husband, Kevin Zembik, to buy the Missing Goat Farm in South Surrey, B.C .

To gain exposure for her flower business, she promoted her beautiful farm to some magazines. As luck would have it, one of the editors noticed her unique, whimsical country-inspired esthetic and bold use of colour. “She suggested I become a prop stylist,” says Heather. “I didn’t even know that was a job.” It turned out she’d been styling all along — making spaces look so inviting you want to live in them.

The couple and their daughter, Lily, had already made the farm their home. When the recession hit and her styling work dried up, it became Heather’s workplace, too. She moved on to making jam for a living.

The farm had over 500 blueberry bushes, so Heather and Kevin rolled up their sleeves, dug out the stinging nettles and built a shack to sell fruit and homemade lemonade. Floods of people also came to pick their own berries. “Every Friday the bushes were stripped. Then the next week it’d happen all over again,” she says.

Heather began making small batches of pectin-free jam with some of their bounty, and friends who owned local shops and cafés sold it. She and her four-year-old, Lily, became a mother-daughter delivery team. “We’d stop in at every store for a chat. It was a great way to spend time with friends,” she says. Now her jam is sold in 50 locations. They’ve hired distributors, but Lily still helps out by labelling all the boxes. “She’s pretty good with the sticker gun,” laughs Heather.

Next on the agenda is getting organic certification for the farm, and they’ll continue to donate excess produce to a local food bank. “Even if you just have an apple tree in your yard, you can help,” says Heather. That’s one way to make life sweet and meaningful. (Eat your heart out, Martha!)

I wake up in the middle of the night thinking about… Did I add the pinch of cinnamon to the blueberry jam?

My favourite moment of the day is… when my daughter wakes up and asks for a cuddle.

I’ve started this a thousand times… Reading a book. I’m dyslexic and reading is torture.

I define downtime as… pyjamas on by 6 p.m., daughter in bed by 7 p.m., a glass of wine in my hand, my husband asleep on the couch and a movie on TV.