A behind-the-scenes look at Chrissie Rejman's 30 years (and counting!) as the reigning producer at Cityline. 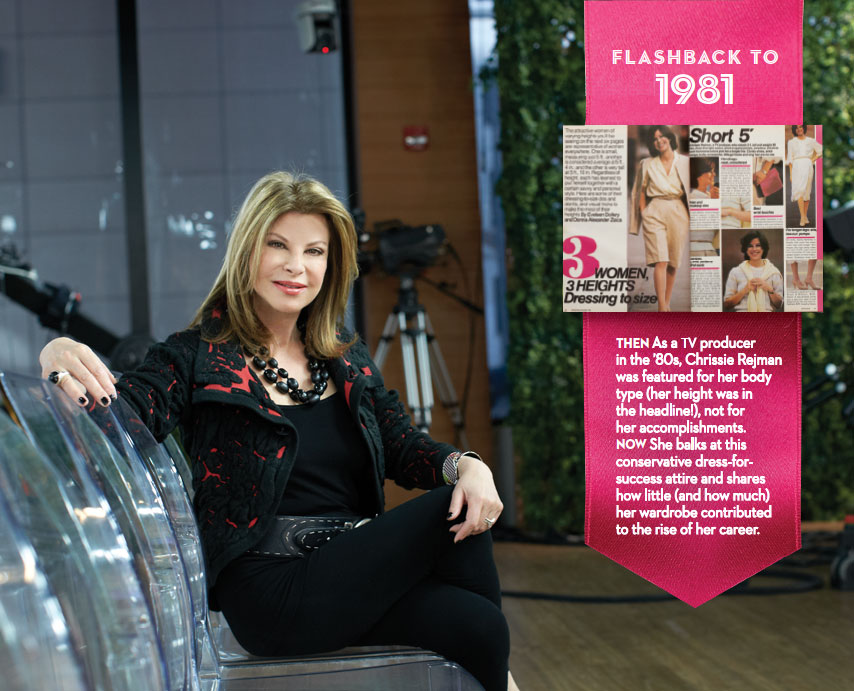 Chrissie Rejman on set at Cityline

When Chrissie Rejman came to Canada from England in the early ’70s, she wasn’t sure if she’d stick around. Not that she had much to go back to. Chrissie came from a working-class background and was brought up to believe that, if she was lucky, she’d pass the time in a secretarial job somewhere until she found a man to marry. “And then the definition of my life would be my husband.”

So Chrissie dutifully attended a business college to prepare for just that, but at 22 she travelled to Toronto in the hopes that something — anything — else might happen. “You either left the U.K., or you didn’t get the kinds of things you wanted,” she says. “I credit Canada for the fact you could come here and become somebody.” Chrissie got a job as a sales secretary for Citytv in Toronto, which was then in its first year, and decided to stay put.

“Someone told my boss, ‘You shouldn’t have a woman doing this, and it certainly shouldn’t be her.’ ”

Soon after her arrival at City, Chrissie was promoted to videotape librarian. “Back then, the tapes were enormous,” she says. “I was five feet tall, and if I weighed 95 pounds, I’d be surprised.” But she knew she had to prove herself. “The head of engineering told my boss, ‘You shouldn’t have a woman doing this, and it certainly shouldn’t be her, because heaven knows she can’t lift those tapes.’ I thought, ‘Oh, no? You bet I can.’ And that’s what I did. I still have good arm muscles because of it. You always had to be stronger than you thought you could be.”

Chrissie credits her transformation from timid twentysomething to self-proclaimed “crusty old broad” to other women in the industry who encouraged her to stand up for herself. In those days, she says, women were told what they couldn’t do. Early in her career, another producer informed Chrissie that no woman would ever make over $10,000 a year. (“He was a bit of an asshole.”) Within a couple of years, she’d outstripped his salary. “It was one of those moments of ‘You said that to me?’ Now look where I am!’”

“I will never forget the moment I was told to go ahead and book a show.”

Eventually, Chrissie stopped lugging videotapes and began operating them instead. When she became a production assistant, City was a low-budget affair. There was a single camera, and the studio was closet-sized; half the desk was painted on a wall so when it was shot, it looked like a full desk. But the fact City was minuscule and had no money also meant there were more opportunities, Chrissie says. “I will never forget the moment I was told to just go ahead and book a show. I remember the flush on my face and the amazing feeling of knowing I could do it.” And, just like that, Chrissie became a producer. In her first week, she booked a psychologist and an artist, Helen Lucas, who became a regular guest and a close friend. “It was about connecting all these different women, and I loved it.”

“I think I would have been a way worse mother if I’d stayed home.”

Chrissie kept working after her two sons were born. “Sometimes, there are choices to be made, and I can’t say they’re made without guilt, but you find a way to manage,” she says. “I think I would have been a way worse mother if I’d stayed home. There’s no such thing as doing anything perfectly — instead, you do something and hopefully inspire your kids along the way.”

Being a TV producer is not nine to five, and even now Chrissie’s day usually begins around 7:30 a.m. The show is live to tape in front of an audience, and talking to the audience is her favourite part. “I go out there and say, ‘I’m Chrissie, the producer,’ and I introduce the show. I’m the first line of what they’ll experience, and I get to see what touches them, what keeps them engaged. It’s never like ‘Hello, stranger’ — it’s more like a family get-together.”

“Being smart isn’t what gets you the ultimate job.”

Chrissie’s key piece of advice for job seekers is not to come in with a sense of entitlement (“You’re not owed a career; you earn a career”). A job interview with Chrissie can be daunting. “The first thing everybody says to me in an interview is, ‘I want to be on-air.’ And I think, ‘Oh, right.’ Then they say, ‘I like people,’ and I say, ‘Really? I don’t.’ Just to see how they’ll react. Being smart isn’t what gets you the ultimate job — it’s about having energy and creativity.”

Those are the traits that have helped her most in her career, she says, and at 64 she isn’t planning her retirement any time soon. “I see these ads that say ‘Freedom 55,’ and I think, ‘Really? Like, really?’ I still have lots of energy, and I’m not ready to stop.”

“The older I get, the bigger the jewellery I wear.”

Early on, Chrissie dressed conservatively, until she realized that wasn’t the way to impress City’s famously unconventional co-founder Moses Znaimer. “One day I was wearing a suit and ran into Moses. The worst thing he could say was, ‘You’re looking a little MOR [middle of the road] today.’ When he said it to me, I just thought, ‘Oh, shit.’ That’s when I started wearing leather pants and outfits that were a little offbeat.” And the style stuck. Chrissie describes her current look as quirky. “The older I get, the bigger the jewellery I wear. I’m out there, because I can be.”

“The best days are when you walk out laughing.”

Chrissie has produced thousands of shows and is as excited about stepping out under the lights as she was on her first day. “There’s always a point where people say there are no new ideas. We can’t do this. I just laugh and say, ‘Oh, really? Look at the bottom of that barrel, waaay down. Oh! There’s a little something down there that can be changed into something lovely.’ And that’s what I do. Of course, there are some shows where you go, ‘Ugh, that could have been better.’ But the best days are when you walk out laughing, and the audience is smiling, and it’s this wonderful convergence of enjoyment and wow, that’s my job! All these years later.”

September 28, 1972: City launches in Toronto. Its tiny Queen East studio is so open that curious people walk into the control room in the middle of a show. Dan Ackroyd is an original staff announcer.

1990: City creates Speaker’s Corner, a booth outside the studio where people can record a two-minute video (the ’90s version of YouTube).

2006: City is the first Canadian broadcaster to offer high def.

2008: Tracy Moore takes over from Marilyn Denis, who leaves after 19 years at Cityline.