Sure, we've been driving for decades, but when it's time to buy a new car, walking into a dealership can make us feel as if we're 16 again. Rev up your confidence - and leave rude salespeople in your dust - so that you can drive off the lot with what you want 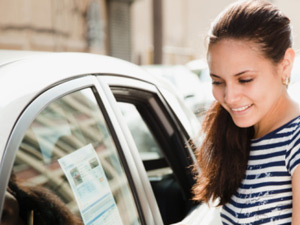 My sister arrived at the dealership during her lunch break. Dressed in slacks and a blazer, her uniform as a hard-working labour lawyer, she drove up in a car that she’d been leasing over the last year for her half-hour commute to the office. The car, a red Chevrolet Cobalt, was in good shape, but the time had come to own a vehicle, and my sister was looking for something a little sportier.

The salesperson who greeted her didn’t seem to notice any of this. What he did notice was that she’d brought along our father. “Daddy’s little girl, huh?” the salesperson smirked, before launching into his sales pitch.

I’ve called my sister a lot of names over the years, but “Daddy’s little girl” has never been one of them. Like many a modern woman, she is smart, accomplished and overly qualified to do just about everything: At 35, she has bungee jumped, skydived, lived in England and Thailand, learned several languages (including, for some bizarre reason, Latin) and completed three university degrees. But, like many a modern woman, my sister felt intimidated by shopping for a car. “I just felt silly, like I had no idea what I was talking about,” she says.

When her busy work schedule limited the time she could spend researching her big purchase, our retired dad happily threw himself into the project, sending her articles from newspaper automotive sections and accompanying her to car lots to check out what was available.

Car shopping with Dad put my sister in good company: One 2006 survey of female car buyers in the U.S. found 77 percent planned to bring a man along for their next vehicle purchase, be it a friend, brother or dad, to help them navigate the process. And this was actually an increase from the results of the same study two years earlier, suggesting that women are not necessarily feeling more at home on the car lot. Nearly seven out of 10 women in that survey stated they still feel at a greater disadvantage than men when buying a car, and the majority said it is the financial aspect of the transaction that scares them the most.

So while we’re comfortable managing employees, paying bills and carrying out the myriad responsibilities of our personal and professional lives, we’re unnerved when confronted with that new-car smell.

Further research conducted by the Wharton School at the University of Pennsylvania and the Verde Group, a Toronto-based consulting firm, found that women do react more strongly than men to the personal interaction with sales associates when buying a car. “We care about what the salesperson thinks of us,” says Susan Winlaw, the Toronto-based co-author of the book Car Advice for Women (and Smart Men). And we don’t have to be blatantly disrespected to feel uncomfortable on the car lot. Just being ignored can make us feel powerless and undermine our confidence as consumers.

Winlaw spoke with several women who, after walking into their local dealerships, were ignored by the salespeople and ended up buying far from home when they found a friendlier sales staff.

After the salesperson’s belittling comment, my sister stopped bringing our father along to car dealerships. But without Dad, she found herself being condescended to, ignored and even, in one instance, subjected to griping about a salesman’s divorce, which made her so uncomfortable that she missed a turn during a test drive. When she told another salesperson she was considering the environmental boons of buying a Prius, he scoffed about how he’d lost another prospective female client. “I guess she wanted to save the world or something,” he said dismissively.

Although Winlaw believes that as women we should not be afraid to bring male companions if they make us feel more confident, we should ultimately find dealers we’re comfortable with and make them work for the sale. And Stacey Polyschuk, general manager of a Courtesy Chevrolet dealership in Toronto, says that no one should feel bad for not knowing everything about cars — it’s the salesperson’s responsibility to guide the buyer through the process. “It’s up to us to find out what your needs and wants are,” she says. “Tell us what you want and then it’s up to us to find it for you.”

Polyschuk adds that ignorance about cars is not gender specific. “A lot of men have no idea what six-cylinder means either, so don’t let that be an intimidation factor.” If the salesperson starts throwing out references to rpm, torque and how long it takes for the car to get to 100 kilometres per hour, ask what these terms mean and why they’re important. As Winlaw points out: “When you have two kids in the back seat, who cares how fast it can get to 100?”

Thankfully, car companies are making an effort to rid their dealerships of sexist attitudes. Women are powerful players in the automotive sector, and the industry has pushed itself to be more reflective of our priorities. “It’s getting much better,” Polyschuk says. Her own dealership has women working at every level, from the office staff to the sales floor to the service centre.

Nicole Aucoin, a teacher in her early forties, has noticed the shift. She remembers feeling the urge to flee car lots when she bought her first vehicle a decade ago. Dealers were more interested in discussing colours and telling her how “cute” certain options were than in saying how each one performed. But last year, Aucoin and her boyfriend bought two cars, a Volvo and a Smart car, and she says the experience was different.

“They didn’t talk down to me. The salesperson who took me for a test drive talked about shifting and the engine, things you’d expect to discuss when you buy a car, as opposed to the colour of the upholstery,” she says. “They acted like I might have a clue.”

And we do: In the last few years, Polyschuk says, women have arrived on the lot more prepared than ever. “They have a shopping list and they know exactly what they want,” she says.

It’s worth taking the time to research various models on the internet, then test driving the ones that catch your eye. And once you’ve settled on a car, investigate its price at different locations, because not every dealership will charge the same price, and decide the maximum amount you are willing to pay. Winlaw’s niece bought her car in a small town, northwest of Toronto, because the dealership there was willing to give her the best price. Overall, the amount of time and research you invest should be dependent on your budget. The more you’re spending, the more margin there is to be exploited.

If you feel as though you’ve been confronted with sexist or belittling attitudes from salespeople, don’t let the behaviour slide, Winlaw advises. “You want to bring it to their attention immediately,” she says. “If it continues, then you say, ‘Do you suppose you could bring in the manager of this organization?’ ”

When the manager arrives, Winlaw suggests women should say, calmly, “I’m not purchasing a car from you, and this is why.” Explain your reason, and then walk out.

As for my sister, she decided to buy a Prius, like that other woman who’s trying to save the world or something. But she will be purchasing her new car from a dealership where the salespeople didn’t moan about their divorces during her test drive. Annoyed by the way she was treated, my sister is retaliating with a powerful tool: her paycheque. That’s Daddy’s little girl for you.