Career advice: The innovative artist who pioneered the thought-controlled computing company Interaxon, shares how integrating art with science helped in her success 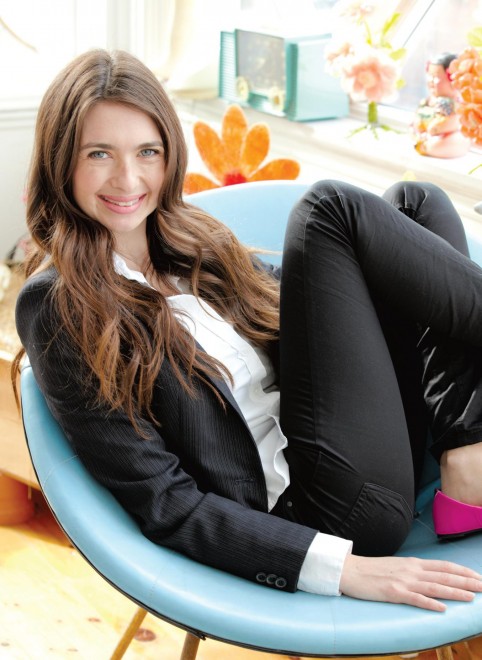 Psychotherapist and visual artist Ariel Garten is the CEO of Interaxon, a technology company that allows us to harness the potential of the most important organ in our bodies, the brain.

Q. So how exactly does your business work?

A. We build thought-controlled computing software and technology. You wear a headset that contains an electrode that can read the frequency of your brainwaves, and you create a signal by focusing and relaxing your mind. That signal can then be interpreted by different applications.

Q. What do you use these applications for?

A. In its simplest form, I can stare at a light bulb and by focusing, which increases my beta waves, make it light up. Then there are programs that take their cues from us: I can wear a headset when I’m reading in bed at night, and as I read, the light senses that I’m concentrating so it gets brighter. Then, as I fall asleep, the light picks up on my increasingly relaxed state and increased alpha waves. It can tell I’m dozing off, so it dims to relax me and finally turns off when I’m asleep.

Q. Wait, did the lights just get brighter? Is this office hooked up to your brain?

A. [Laughs] No. I am quite disappointed that we don’t have a thought-controlled water cooler, though.

Q. Is it really possible to connect with the world by thought alone?

A. Absolutely. In 10 years we’ll be interacting with all of our devices — phones, computers, TVs — just by thinking.

Q. That’s amazing! How did you come across this technology?

A. After I finished my undergrad in neuroscience at the University of Toronto, I collaborated with one of my professors, Steve Mann, who developed a system in the ’90s that allows you to capture data from the brain and do things with it. At the time, I ran my own clothing boutique in Toronto, and we synced up equipment between my store and his lab. Then we held a concert at my store in which the musicians’ outputs were controlled using the brains of people watching from the lab. That was really cool. I focused on my store for a while, and then, three or four years later, I looked back and thought, “Whoa, we can control things with our minds. Let’s get this ready for people to use.”

A. I went into business with two friends of mine: Chris Aimone, who was also working on his master’s in Steve Mann’s lab, and Trevor Coleman, who is our operations guy. Generally, we identify a need we can create a product for, and then we partner with research laboratories to make sure it’s viable. Part of our job is to find ways to use this technology that people can wrap their heads around and actually use in their daily lives.

A. We’re trying to create a warning system to alert an epileptic prior to a seizure. By wearing a simple sensor that connects to the forehead, people with cognitive conditions can be monitored. So in the case of epilepsy, you can warn somebody they’re about to have a seizure 30 seconds before it happens. That’s long enough to have them sit down, inform the people around them or stop driving. The system we’re building could also potentially let doctors know and send them a recording of the seizure so they could look at it, tell your family, and call and check up on you.

Q. You studied neuroscience, but you also had your own fashion line. How have both fields helped you?

A. I’ve always done art and science at the same time. Even when I was in high school, I was a student designer for fashion shows and plays while I was getting 90s in my science classes. Having both creative and scientific backgrounds has helped me immensely, because we’re making a technology that needs to fit into people’s lives. There’s a big creative and emotional side to that.

Q. And your mom is celebrated oil painter Vivian Reiss. How did she influence you?

A. My mom’s very visual, and she taught me that you can have a crazy idea in your head and then manifest that idea. She would just paint her visions and concepts from what seemed like nothing. So I grew up very much feeling as though anything is possible, which is probably how I got to the wacky place I’m in.

Q. Where did you start out? What was your first job?

A. My father was in real estate, and when I was about 12, I began showing apartments for him. I loved talking to people about the Victorian fireplaces and I was always really into history, so it didn’t feel like work. Nothing I’ve ever done feels like work, which is pretty lucky because I’m often here till two in the morning.

A. We’re open for investment now, so there’s a hell of a lot of work to be done to create all the appropriate documentation and pitches and business models. That’s the next phase. Plus I don’t have an MBA, so I’m teaching myself as I go. Then I also run my psychotherapy practice for four hours a week.

Q. Wow. Of all the hard work, what would you say was your proudest moment?

A. Sitting in Vancouver during the Olympics, using my own technology and brain to make the CN Tower light up back home, which my mother was watching from our driveway. We had live feeds of the tower, Niagara Falls and Parliament Hill, so people could see me controlling them in real time. I thought, “I can’t believe that this is happening.” We did it on a four-month timeline, and I remember talking on the phone to someone in the Ontario government, telling them that we would fail if we attempted to control more than the CN Tower. And they said, “No. You either have to do all three of them or none.” At that point we were three people, so we very quickly pulled together this 25-person team.

Q. Is there anyone who inspires you?

A. The first person that comes to mind is Salvador Dali: He showed us that the world doesn’t need to work in the way you think it needs to work. You can turn the world on its head and find beauty and functionality, and new relationships and patterns come out of it. Creativity, to me, is being able to juxtapose two unrelated things and find the meaning in that; it’s being able to use things in new ways.

Q. What about the world of business — do you find new relationships and patterns there?

A. Everyone’s in business to create partnerships. People know it runs on human capital, and it is only as successful as the relationships you make. We think of business as being really cutthroat in some ways, but it’s actually highly collaborative. It’s extremely common for more established companies to mentor and support other businesses. And there’s more than enough room in the arena we’re focusing on. It’s blue sky out there, and the market would benefit from more people helping to educate the public about how this technology works. If there were more companies competing in this field, it would only help.