Pyman Media Group President is no stranger to difficult times

After Andrea Pyman's husband was killed in an accident, she had to raise their two teenage boys and run his video production business without any previous experience. Here she shares her words of wisdom. 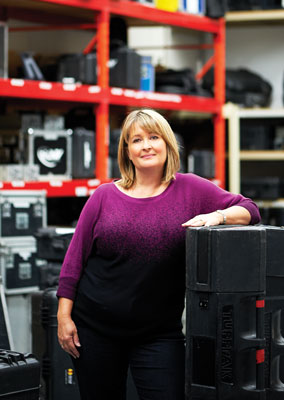 Andrea Pyman was a teacher when her husband, Rick, was killed. He had stopped at the scene of a roadside accident to help out and was hit by another car.

Instead of selling his television and video production business, Andrea decided to keep it going on her own. “It was hard, because I was figuring out how to save our business and our livelihood. You know what they say about necessity being the mother of invention.” Rick didn’t have life insurance, and when he died their two boys were 14 and 16.

What kept Andrea going was the fact they’d often discussed what would become of the business if something happened. “Rick always told me that I should take over. I argued that I didn’t know anything about the business, and he’d say, ‘Don’t worry, you’d be fine.’ It helped me, because I knew he thought I could do it.”

Andrea not only took over but expanded the company to include a state-of-the-art TV studio. She provides any service, from just renting a camera to producing TV shows. She’s produced live election coverage as well as game shows and cooking shows, many of which she developed herself. One of her most recent gigs was filming Celine Dion’s concert on the Plains of Abraham.

Words of advice: “Don’t try to do it all yourself. Build a team around you and trust people to do their jobs. While you’re at it, figure out what you are best suited to and create a job for yourself that is satisfying long-term.”

Defining assets: “We have a green room where the talent waits during production. We call it Ricky’s Room. We try to honour him in everything we do.”