How this ski-shop owner lost thousands of dollars

32-year-old Alexandra Messinis shares how she went from professional boarder to smart businesswoman. 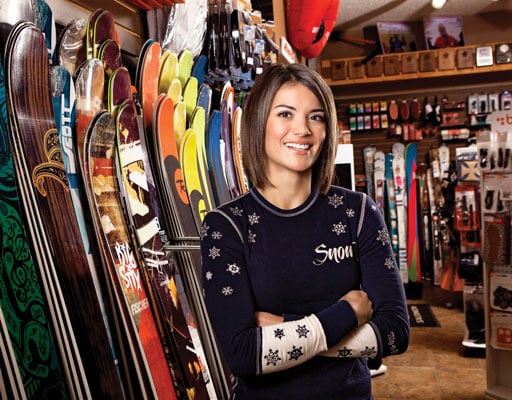 Alexandra Messinis had to do some serious squinting, but the downhill skier saw magic in a dusty old ski shop in Edmonton. “It was dingy and gross, with a dated ’70s motif,” she says. Alex envisioned a bright space for boarders and skiers to get the latest gear. She bought Sundance Ski & Board Shop with Jim Hillman, whom she calls her “best friend, business friend, boyfriend.”

“I figured I could make a go of it because of my love for the sport.” Alex started skiing at age six when she was so small the rope tow used to pull her off the ground. Her parents were hard-working Greek immigrants, and there wasn’t a lot of money, but her mother promised her a snowboard to share with her sister in return for washing dishes at the family’s restaurant. “I ended up competing in big-air contests and boarder-cross races. It became an addiction for me.”

Since buying the shop in 2009, Alex has seen business more than double. She strives to cultivate a vibe that is anything but the “dudes and bros” atmosphere of most ski shops. “Women want to be educated; they don’t like being talked down to.”

Up next? A new location and expanding e-commerce, which Alex took from 300 to 10,000 products. “My old site was clunky and had to be manually updated — customers would think they’d bought a pink helmet, when really we’d sold out.”

Lessons learned: “Always go through your invoices with a magnifying glass; we’ve found mistakes amounting to thousands of dollars.”

Defining assets: “We run a pile of special events, including our annual Legendary Turkey Sale, where we give away turkeys with purchases — it’s great seeing the expression on people’s faces when we hand them a frozen bird!”