Women today spend about half as much time doing housework as we did in the ’60s — victory! Except now our homes are kind of dirty. Why it’s time to get reacquainted with that most basic chore. 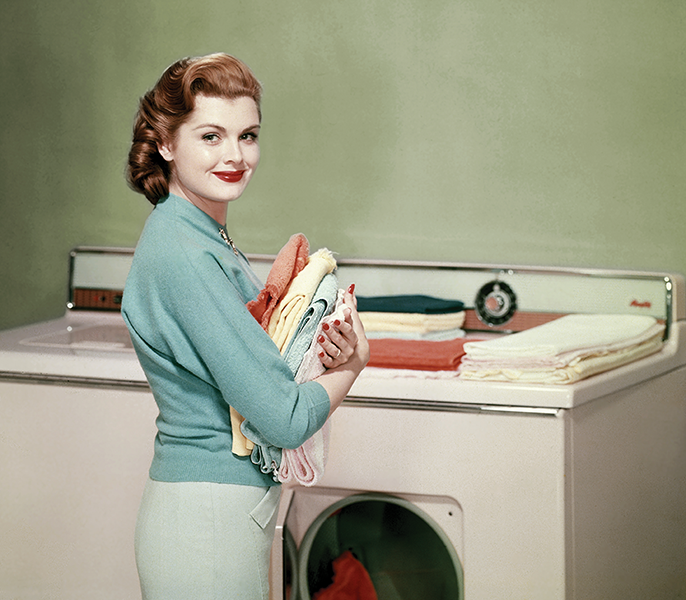 Of all the ancient domestic arts, cleaning clearly has the biggest PR problem. Cooking, of course, has risen far above its 1980s microwave-happy nadir. Gold stars for realness are now doled out to those who take the time to knit, garden and breastfeed their progeny until the babes are close to college age. Even decluttering has become cool, with Marie Kondo’s The Life-Changing Magic of Tidying Up causing borderline religious fervour in her followers. But after chucking out all those unneeded possessions, you’re still left with dirt. Cleaning can seem like a vestige of a pre-feminist era. It is also, increasingly, a thing we don’t know how to do, which may be why Melissa Maker, founder of Toronto-based housekeeping service Clean My Space, has found insane popularity with her YouTube channel, where her basic how-to videos have been viewed over 22 million times. The people want to know — so clearly it’s time to resurrect home ec, to teach the next generation of adults the basics of dealing with their grungy homes.

“Cleaning can be a very frustrating thing to do — especially if you’re not doing it well,” says Maker. Her lessons on degreasing filthy oven racks, cleaning a toilet in just three minutes and getting rid of pet hair “for good!” — all delivered in a straightforward, you-can-do-it style — have attracted more than a million viewers each. The 33-year-old isn’t actually a fan of housework, which is why she decided to learn how to do it properly. “It often feels like a burden or a thankless job,” she says, “because we don’t take time to develop the right techniques.”

Related: How to clean your house in 30 minutes (or less)

Remember: Cleaning used to be taught in school, under the heading of “domestic science.” A 1920 British Columbia public-school curriculum lists “washing dishes and saucepans” as a required skill for earning a diploma (for girls, of course). Students were quizzed on the cost and care of brooms and brushes. And they didn’t just compare the quality of various soaps — high school students studied the process of saponification, in case they preferred to make the stuff themselves.

Much of that solid institutional knowledge has faded. As a discipline, domestic science was relegated to the dustbin decades ago, as women migrated into paid work. In 1965, American women — well, mothers — spent 111 minutes a day on cleaning and 54 minutes on laundry; in 2012, those numbers were 61 and 22 minutes. Men have picked up some of the slack, but not all of it. When all is accounted for, Canadian households spent 24 fewer minutes on daily cleaning in 2010 than they did in 1986.

That might sound like a good thing, but if the technique sucks, then so will the result. Hiring a housecleaner is an option, of course, but that choice can stir guilt over literally passing off the dirty work to other women. Besides, it’s a parental responsibility to make sure your offspring can clean, lest their apartments become fungus farms once they finally move out. Maker says many of the tutorial requests from her 300,000 subscribers come from “little kids” whose allowances hinge on completing chores they were never taught how to do. (An eight-minute video on cleaning bedrooms has been viewed more than a million times.) And the perks extend beyond pocket change: Cleaning has mental health benefits, and tackling just one housekeeping job can cause a noticeable boost in mood. In psychotherapy-speak, it creates a “sense of mastery.”

Since everything old is new again, might cleaning actually earn that loved-hated badge “artisanal”? Could polishing become the new pickling, a brag-worthy pastime for men with lumberjack beards? “I think of going back to our roots,” Maker says. That’s easily done: It means ditching harsh products for baking soda; it also means going slowly. Recognize that the task has value and totally counts as spending time with our families.
And let’s be clear: The whole family should be pitching in. Housework isn’t women’s work, but neither does liberation look like a crusty oven rack. The point is to take the politics out of it and teach people, once again, how to clean up their mess.

Related stories:
How to get your house party-ready in a hurry
Molly Maid’s guide to cleaning your house in a rush
How do you get rid of fruit flies?