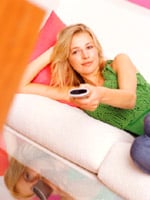 OK, fess up. You’ve got a bad habit or two. Buying stuff you don’t use, watching too much TV…the usual. You’re convinced these habits are no big deal – you could stop anytime – but when you actually try, you might find it’s harder than you expected. That’s because long-standing bad habits are not only familiar (and therefore reassuring), but also because they generally feed a need that isn’t being met elsewhere in your life. But that’s no reason to be discouraged. You can break bad habits, and when you do, your hard work can pay off in the form of family harmony, financial stability and peace of mind. Here are a few tips from experts – and gals who have been there – for breaking free of six common toughies.

Here’s how to stop…

Buying stuff you don’t use

As with most women, Cortney Cassidy loves to shop. But the Toronto event planner had a bad habit of buying items she barely used: candles, pillows, picture frames, pants, blazers…the list went on. While her bank account was running on empty, Cassidy’s closets were stuffed, her drawers were overflowing and there wasn’t an empty surface in sight. The reason? Cassidy never met a sale she didn’t like. “I’d think, This is too good a deal to pass up,” she explains. There are other reasons women hit the stores more than they should, says Dr. Colleen MacDougall, a registered psychologist in Edmonton. “People use shopping to fill a hole: to feel special, to belong, to be valued, to be adored,” she says. Plus, shopping is an activity that is positively reinforced by society.

The good news is you can change your ways. When you get the urge to splurge, choose another activity to soothe yourself, such as reading or exercising, says Dr. MacDougall. Stay away from the stores. “Don’t put temptation in front of you,” she advises. If you can’t resist shopping (like Cassidy), MacDougall recommends cutting up your credit card and drawing up a shopping budget. Cassidy went so far as to create shopping rules for herself: for clothing, she has to be able to incorporate the item into three or four outfits; for home accessories, she has to have a place to store it. The strategy is working. Cassidy hasn’t bought an unused item since moving from the spacious loft she lived in with her husband to a tiny bungalow last year. If you feel your problem is too out of control to deal with alone, visit Shopaholics Anonymous for more information.

People get sucked into zoning out in front of the TV or surfing the web for a variety of reasons, mostly because they are handy, accessible ways to escape from daily problems and keep boredom at bay. To cut down, Dr. Patrick Keelan, a registered psychologist at Calgary Counselling Centre, suggests selecting specific shows you want to watch or websites you want to visit, in advance, and then setting a time limit. “You might even want to use an alarm clock to help you stop,” he says. For extra motivation, Dr. Keelan recommends keeping a picture of a loved one by the TV or computer. The picture will remind you of what you’re missing.

Committing to other activities with friends and family can be a huge help as well, since involving others makes you more accountable.

Kimberley Seldon describes herself as obsessively punctual, but that wasn’t always the case. When the Toronto-based designer was younger, she was chronically late – that is, until she arrived 30 minutes late to an important meeting and the client fired her on the spot. “I vowed never again,” says Seldon. “I realized that being punctual was a sign of respect.” Seldon now arrives at least 10 minutes early for meetings by figuring out her route using MapQuest and adding 15 minutes to the suggested travel time in case she hits traffic. Seldon is also careful not to overbook her schedule, so she’s not setting herself up to be late by trying to cram too many appointments into one day.

Slobs aren’t necessarily lazy; often they just don’t know how to let go of items and don’t have a system to keep their belongings organized, explains professional organizer Lisa LeBrasseur, owner of Room to Improve, in Lower Sackville, N.S. If you’re a pack rat, LeBrasseur recommends reducing the clutter gradually, rather than trying to clear out everything at once. Go through your belongings and ask yourself three questions: when was the last time I used this?; do I have duplicates of this item?; and will I pick up this hobby again? Once you’ve cleared the clutter, then you can get organized. This can be overwhelming, so start by tackling something small, such as a junk drawer, and build on your success. Finding a proper home for your household items is key: place items you use frequently in easy-to-access locations and put items used less frequently in storage. To maintain order, always put items back in their places. “It doesn’t take a lot of time if you don’t let a mess build up,” says LeBrasseur. To prevent clutter from taking over again, apply the one-in, one-out rule: if you bring something new into your home, then take something old out. The reward for your effort? You’ll feel much more relaxed in an organized environment and you’ll be able to find what you need, quickly and easily.

Toronto-based Jill Nurse had a habit of dating the wrong men – men who took, took, took in a relationship and never gave. She was puzzled because she didn’t seem to be dating a “type” – these men were all very different from each other on the surface. It wasn’t until she stopped looking at the men and started looking at herself that she had a breakthrough. She realized she was the common denominator. “I would always end up choosing men who needed to be taken care of in some way,” she says.

Gloria MacDonald, owner of matchmaking service Perfect Partners, in Toronto, says women are often attracted to men who possess qualities they don’t. So a serious planner might go for a fun-loving, spontaneous guy. The catch: the qualities you find attractive can often end up being the very ones that cause friction in a relationship (especially if you don’t share the same values). To break the pattern, MacDonald says you need to understand what you’re attracted to and then move beyond the initial attraction to find out if the person shares your core values (approach to money, how to raise children, work ethic). If he doesn’t, then it’s time to say hasta la vista, baby. For Nurse, a stint in cognitive therapy (a type of therapy that focuses on changing unproductive thought patterns) helped. She wrote a list of all the characteristics she wanted in a man. “This helped me identify what I desired in another person and what I wouldn’t settle for,” says Nurse. Whenever Nurse met a single guy, she’d flip through the list, mentally, to assess the potential suitor. The more subtle behaviours, such as how he treated his friends and whether he tried to monopolize her time, required watching and listening. When she met Rob, he had many of the qualities on the list, and she knew he was a better choice. She is now engaged to Rob and set to be married in October 2006.

Seeing the glass as half empty

Laurie Ahdemar, an aesthetician from Vancouver, used to be very negative. “If something didn’t turn out the way I wanted, I’d become angry or fall into self-pity,” she admits. But Ahdemar realized being negative didn’t make her happy or bring her desired results. “The mind is very powerful. If you expect the worst all the time, that will likely be the outcome. It’s like a self-fulfilling prophecy,” says Dr. Neill Neill, a registered psychologist in Qualicum Beach, B.C. However, you can change your mindset if you want to. If you’re facing a difficult situation, ask, What I am afraid of? What am I supposed to learn from this? Even if you don’t know immediately, just asking these questions will get you out of a victim mindset, says Dr. Neill. Next, get any help you need to improve the situation. This reframing is exactly what Ahdemar did. For example, when she failed her driving test, she focused on what she needed to improve on and what she could learn from the experience instead of the fact she didn’t pass. She kept practising, took the test again and passed with flying colours. This is a hard pattern to break, but when you find yourself sliding back into negativity, stop and think of a positive memory or picture and stay with it for 15 seconds, recommends Dr. Neill. It will help you get perspective on what’s going on. It’s also helpful to surround yourself with positive people and minimize or cease contact with negative ones. This may actually start to happen naturally, as positive people tend to attract other positive people, says Dr. Neill.