How Zarqa Nawaz Pulled Off A Satirical Novel About ISIS 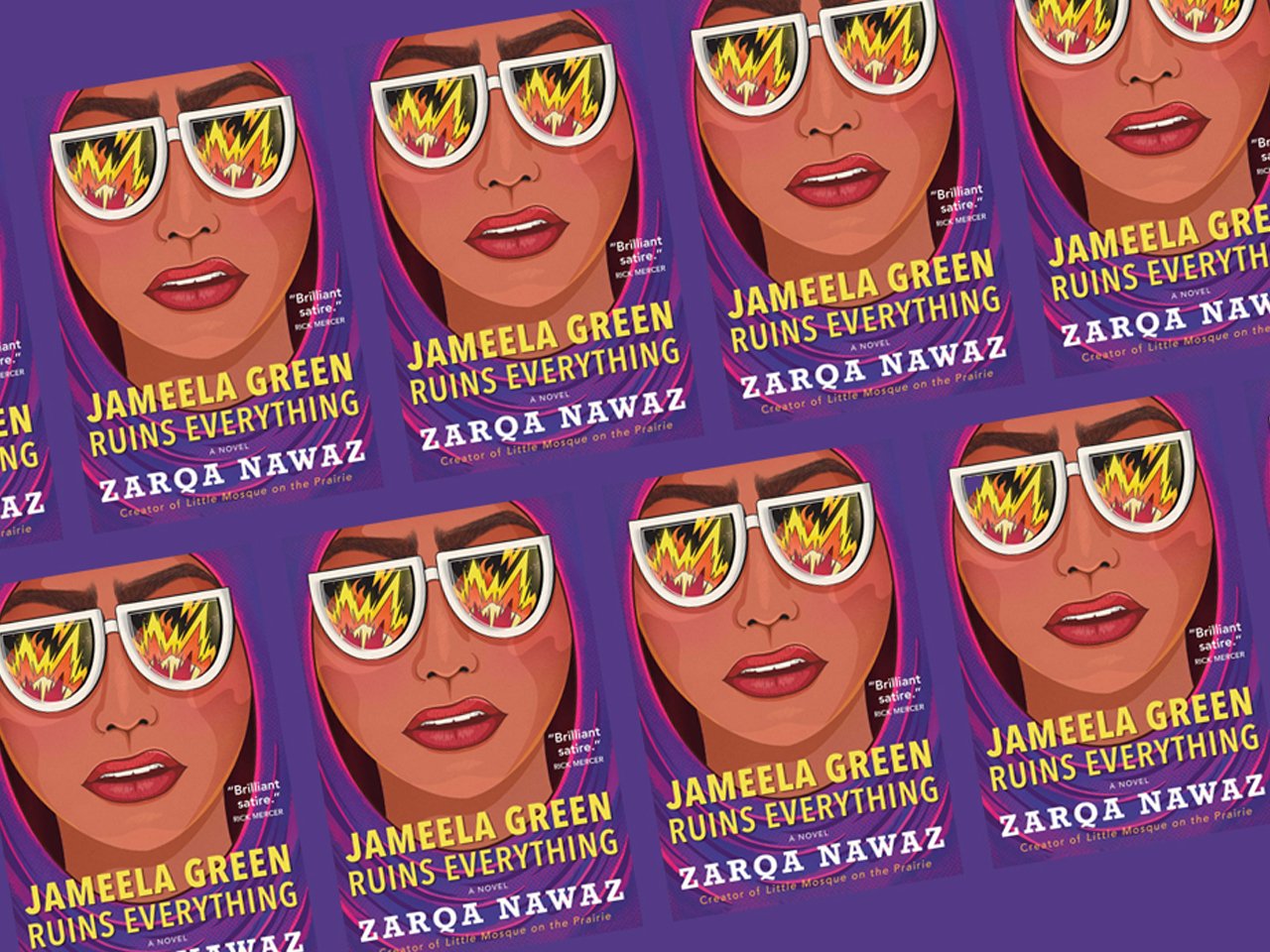 A satire about ISIS is a big swing to take—but Zarqa Nawaz knows a thing or two about taking chances. Jameela Green Ruins Everything may be her first foray into the world of fiction, but Nawaz has made a career of being a trailblazer. She created the iconic CBC sitcom Little Mosque on the Prairie which focused on a small Muslim community in a fictional Saskatchewan town, the first (and only) show in Canada to feature Muslims in this way. She’s a journalist and former anchor of CBC Saskatchewan’s six o’clock news, making her part of a small-but-growing group of women who’ve anchored newscasts in Canada while wearing hijab. She published her highly lauded comedic memoir Laughing All the Way to the Mosque in 2014 and in 2020, co-created the Women and Non-Binary Open Mic, the first of its kind in Regina, Sask., where she plunged into standup comedy.

Out this week, the novel follows the seemingly shallow titular character, whose only wish is to see her memoir on the New York Times bestseller list. In an attempt to get there, she seeks guidance from Ibrahim, the new and lovable imam at her local mosque who agrees to help her based on one condition: that she do a good deed in return. This kicks off a series of shocking and bizarre events. After the pair try to help a homeless man, they discover he has been recruited by a fictional version of ISIS—or, in Jameela’s universe, Dominion of the Islamic Caliphate and Kingdoms (Yes, DICK). Shortly afterwards, Ibrahim disappears. Convinced he’s been taken by the CIA, Jameela embarks on a journey to rescue him and entangles herself with DICK itself. The book manages to weave American foreign policy and thwarting a terrorist organization with one woman’s search for faith, meaning and redemption. We talked to Nawaz to figure out how she managed to pull it off.

You already wear many hats. What made you decide to write a novel?

It was 2014 and ISIS had just started dominating the airwaves. It was such a confusing and horrible time and all these white people were writing articles in the newspapers like, “This is what Muslims do, it’s natural, it’s part of their culture, they’re horrific and radicalized and they’re extremists and they threaten democratic institutions.” And then all of a sudden Trump gets elected, all the media changes, and it’s all about white extremists. [Before then], fewer people were willing to see white people as terrorists, which is probably why I was having a hard time getting published. And then the world changed. It changed dramatically. It was possible to write a satire about ISIS, because now there were white terrorists that the media was ready to acknowledge and write headlines about that.

And then I was going through this personal kind of crisis where I was like, my last book hasn’t made it to the New York Times bestseller list, I was very bitter and angry and sort of like, What’s happened with my life? Why can’t I be more successful? So I paired those two ideas.

Writing a book about ISIS is quite an undertaking. Did you have a hard time getting it published?

My [original] publisher wouldn’t take it on.  Then I submitted my first draft and they were like, yeah, we don’t like it, we’ll never publish it. I was really, really upset. It took six years to get [published]. Those six years I went through the cycle, along with Jameela, to be kind of mad, bitter and upset, and then just examining all the issues Jameela is examining in the book. What’s the point of praying all the time if God doesn’t listen? What does it really mean to be patient? You know, trusting God when nothing’s working out. She goes through a spiritual journey in the way I went through the same journey and we come out the other end like, Oh, everything’s okay. You shouldn’t lose yourself to despair and, you know, revenge fantasy.

There are a lot of Islamic notions you touch on throughout the book, but you’re not too on the nose about it. Did you do this intentionally?

I feel like I just put enough in to make sure that people wouldn’t get confused, but I tried to put the practices in a way that would be organic to the story. The only pushback that I ever got was one editor said the book was just too wild and I should just take the Middle East portions right out, like just have [Jameela] stay in North America. And I was like, no, no, she’s gonna go [to Syria]. This is happening to real people. I’m not making this stuff up. It might seem wild, but these things actually happened. People left to join this group [ISIS]. There was CIA interference, government interference, American foreign policy caused all these things to happen. And we need to talk about it. There are still men in Guantanamo Bay to this day [who were suspected of terrorism by the U.S. and detained and tortured without due process]. Why should I take out stuff that exists in real life?

Let’s talk about DICK. Why did you choose this name?

The original title of the book was going to be The Rise and Fall of DICK. That was the title I sold. Then [the publishers] were like no, we can’t publish a book with that title. It’ll bring up the wrong imagery when people Google it. I fought them until I realized I may lose this deal and we all brainstormed a bunch of stuff. [But] my children are still heartbroken [about it] to this day.

I think the only way to suck the fear and intimidation out of something is to laugh at it and to make fun of it. People would kind of do that with ISIS [anyway], they were using words like Daesh [and saying] don’t use their term, take the word Islam out of it, so I wanted to just go one step further. And to me this was the funniest way you could make fun of ISIS, to use the word dick, because it opened up a whole world of dick jokes. Which, I will admit, people are split on. You have to really appreciate a certain type of comedy to enjoy those dick jokes.

I think there’s still a lot of fear towards ISIS. What would you say to someone who might think that you’re making light of something horrible?

I would say that we need to stop fearing them and seeing them like they’re the worst thing that ever happened to humanity. We have to understand the history and background of American foreign policy [as] the context in which ISIS formed, otherwise these things will just continue to happen over and over again. And sometimes you can’t get people to read very serious news articles. Sometimes you need to make them laugh and bring their guard down so that they’ll learn something. People have to be made more aware of what’s going on in the Middle East and in Muslim lands because they have dire consequences for the people who live there. I mean, over a million Iraqis have either died or been exiled or have been injured [since the beginning of the war in Iraq in 2003], and for what? For having weapons of mass destruction that never existed? I was trying to get something across about a part of the world that needs to be said.

Are you more concerned about feedback from Muslims or non-Muslims?

Both groups concern me because I don’t want either group to think that I’m promoting stereotypes or selling out our communities so that I can write a book. [For Muslims specifically,] I’d say my hope was for this book be seen for what it is, which is a discussion about how American foreign policy has been destabilizing Muslim countries for decades and the devastating impacts that these policies have had on our countries. That’s why I wrote it. I would hope that message gets through. We [also] need to be a little bit more sophisticated when we read and not to just take it at face value.

I have to ask you: you’re a brown Muslim woman and a journalist who wrote a book about national security and terrorism. Are you worried at all?

I don’t think so. I don’t know. Should I be worried?