We asked our readers to tell us about the book they'll never forget, the one that takes them back to that summer every single time they think of it. Here are 10 of our favourite answers: 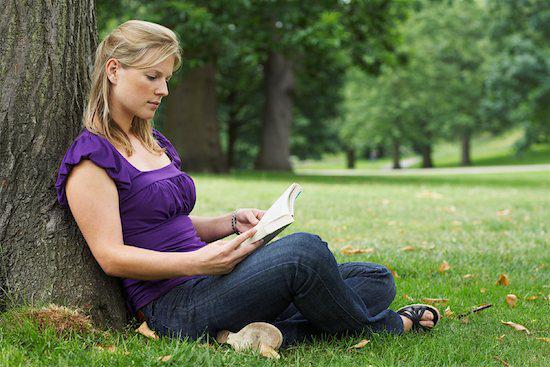 We asked our readers to tell us about the book they’ll never forget, the one that takes them back to that summer every single time they think of it. Here are 10 of our favourite answers:

“My favourite began with watching Gone with the Wind with my parents and then I borrowed the book from the library at about age eleven. I would keep a flashlight under the mattress and would read until I fell asleep. I have read this book at least once a year ever since. I cry in exactly the same spots every time. So not only is it my favourite summer read; it is my all-time favourite book.” — Sandra Graux, Paisley, Ontario

“A few years ago I worked for an independent bookstore in my city. A co-worker recommended Tish Cohen’s novel Town House to me. She deals with a difficult subject (mental health, agoraphobia) but brings it to the human level and is absolutely readable. [She’s] a wonderful author who captures the unique father/son relationship and mental health issues wonderfully. I will always thank that bookstore ([it has] closed due to poor sales and increasing competition from big box stores and Amazon.com) for opening me up to her and many other wonderful authors.” — Tiffany d’Eon, Halifax, Nova Scotia

“When I turned 13 years old, my Aunt gave me a present. It was a beautiful set of The Lord of the Rings. I had no idea at the time that books like that even existed, it was such a magical read to me. I sat on my parent’s deck that summer and just could not put it down. Thanks to my aunt’s intuition and inspiration, I’ve been a voracious reader ever since!” — Krystal Rockburn, Nepean, Ontario

“It isn’t a new one but this summer I am reading The Colony of Unrequited Dreams by Wayne Johnston. Fabulous Canadian historical fiction. Now I want to head to Newfoundland!” — Debra Hamilton, Hartington, Ontario

“One summer, I found, by chance, The Never Ending Story in an old bookstore. I was feeling like Bastian when he first discovered the book in Mr. Coriander’s library, ha ha! I was amazed because I wanted this book for so long! It was delightful, I read it in no time and [it’s one] my favourite stories ever!” — Joelle Taschereau, Gatineau, Quebec

“I’ve read so many wonderful books over the summer but the Harry Potter series was probably my favourite! I’m looking forward to reading them with my 6- and 5-year-old children!” — Ann Johnnes, Burnaby, British Columbia

“I just finished The Devil’s Star by Norwegian author Jo Nesbo. Imagine The Girl With the Dragon Tattoo with an even more flawed hero in the form of burnt out cop Harry Hole, add a dose of creepy mystery and top it off with the kind of page-turning writing that will keep you glued to your beach chair long after the sun has set. Delicious summer book fare!” — Leslie Ehm, Toronto, Ontario

“One summer when I was about 12 or 13, I spent a couple of weeks up at my Nanna’s cabin. I brought the book Watchers by Dean Koontz—it was the scariest two weeks. There is nothing like reading a book about a monster killing people in the wild then living in a cabin when its gets really dark and quiet at night, especially when you’re a young girl with a huge imagination.” — Jennifer Weaver, Calgary, Alberta

“I have recently bought and read Little Women for the first time ever! It was by far one of my favourite books in past summers. Though, my all-time favourites for summer reads would be the Harry Potter series and the Sisterhood of the Travelling Pants series!” — Catherine Arsenault, Moncton, New Brunswick

“So many favourites, old and new, it’s hard to choose. But my latest is a clever, well-plotted mystery, Oxford Exit by Veronica Stallwood, set at Oxford University’s library system, notably the Bodleian Library. This links Kate Ivory’s task of investigating the disappearance of rare books with an intricate library system, a tragic death, and a student’s bizarre weekly creative writing assignments. The author says, ‘In this story I wanted to explore the question of whether books, however old and rare, could ever be as valuable as the life of a young woman, however dull.’ But she also takes a wry look at academia, social class and society in modern Britain, with humour from both characters and situations, overtones of the old being replaced by the new, and veracity: she worked as a cataloguer at the Bodleian when they were switching from the old card catalogues to online.” — Pat Bowie, Ottawa, Ontario