This time around, Benny moves from province to province, city to city and obsession to obsession in her search for serenity. Our thoughts on part two. 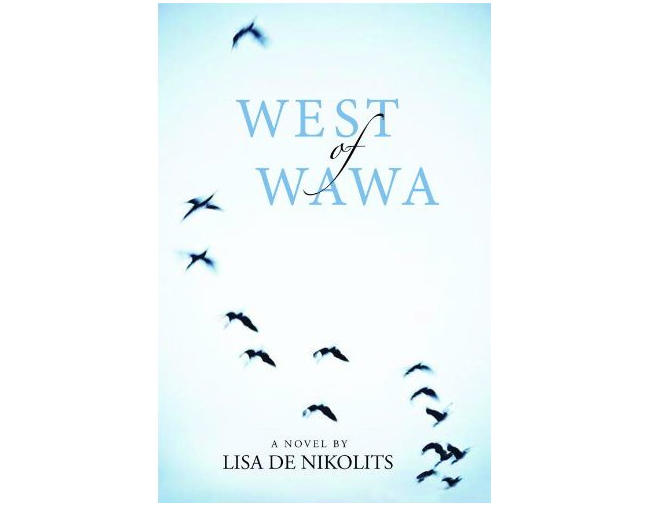 In part two of Lisa de Nikolits’s West of Wawa, Benny moves from province to province, city to city and obsession to obsession in her search for serenity. Meanwhile Alex, Stacy and I contemplate her willful way as we follow her adventures from pages 118 to 198.

Laurie: So, craziness west of Wawa! With a blue-eyed dude named Mickey.

Alex: How accelerated was their romance? I felt I was drunk or under the influence.

Laurie: Benny doesn’t hesitate at all when it comes to the crazy guys!

Stacy: But you could so tell it wasn’t going to end well, even before Benny went to work with him and started talking to George. It’s the Southern Comfort!

Laurie: He was such a loser.

Stacy: Ugh. SUCH a loser.

Laurie: Couldn’t she tell that right from the beginning?

Alex: I’m beginning to figure out that she’s a super flawed character to be so dependent on losers to risk being with a loser.

Stacy: Blinded by love, I guess.

Stacy: But I don’t think she’s looking at them with a clear mind. She’s so raw and damaged herself, it’s like she is instantly attracted to other damaged people.

Laurie: Although she also desperately needs to be needed.

Alex: Yeah, and when she was like “yearning to be cuddled up in bed with Mickey,” the next line reminded you that it had only been 16 days and she was besotted!

Laurie: And if she’s with someone who needs her desperately, they’re so wrapped up in themselves and their own neediness, she doesn’t have to reveal anything about her true being.

Stacy: Is this the whole “darkest before dawn” cliche? Because in the last part I felt like she was on her way to becoming more self-actualized or something… I felt hopeful for her.

Alex: I know! I was a bit disappointed. But at least she’s eating now. And she’s discovered Tim Horton’s!!

Stacy: LOL. She’s all about the Tim’s now. When was the last time she had dressing-less salad?!

Stacy: Or hell, even just a vegetable!

Laurie: And she’s reveling in it. Now she just needs to lose the bad boys, and go for the nice ones – but not the boring ones.

Alex: I just think she’s so broken. The way she was obsessive about that job, throwing herself into moving flowers as fast as she could. She needs a good therapist.

Stacy: I love that she’s able to eat what she feels like eating and not spend days obsessing. Except, she’s kinda shifted the obsession from food to Mickey to who knows what next.

Laurie: But at least she’s letting go of some obsessions. That must be a good sign.

Stacy: True. And I think she may have always been very hyper-focused. The way she was with her art, for example. That may not be a sign of her being damaged, it may just be her.

Alex: Hmm. Maybe. Although to me, anyone who is that committed to finding constant distractions is hiding from themselves.

Laurie: She’s still trying to imagine who she is. Like when she was in Churchill and was envisioning life as a baker there.

Alex: Maybe I’m biased because I just cannot imagine being friends with her.

Laurie: She would drive me crazy. I’d have to hide her drugs, and implore her to dump the boyfriends. But she could be fun, too.

Alex: I would shake her really hard by the shoulders.

Stacy: It’s funny—I really wasn’t that into her at the beginning, but (while I still wouldn’t want to hang out with her in real life) she’s really growing on me now. I empathize with the difficulty of having to find a new dream when the one you’ve had for years and years suddenly doesn’t come true.

Alex: Yeah. At least she rose to the challenge of getting out there and making the best of that situation.

Stacy: I cringed my way through the entire Mickey bit, from his nasty apartment to his need to always know where she was to his calling her “my baby.”

Laurie: Ick all around!

Alex: And the freaking Monkey Bear he packed for her.

Stacy: Super ick! After he STOLE HER BOOK! (Can you tell I’m a serious reader? Haha.)

Laurie: And the friggin’ cell phone.

Alex: I know. So controlling. I feel like the book is coming back. There was something in the way she handled the book that made me think…. this is not the last of this. She’ll find it and he will have written a proposal in it.

Stacy: I could see the scuzzball doing exactly that. Oh! What about Marcia?

Laurie: I wish someone would treat me to a $500 spa day. Do things like that happen on the road? I have no clue…

Alex: She was such a random addition — fairy godmother. I felt like that would have read more comfortably if de Nikotlits spent more words on it.

Stacy: She was random, but in a way that felt kind of true to life — maybe not the $500 spa day bit. But someone taking an interest in Benny and not wanting something from her? Kind of nice.

Laurie: Yeah, you hope there are people like that out there.

Alex: I mean, it seemed very sudden…just like the non-existent sex scene in this part, too…oops!

Laurie: Oh, Alex…I was thinking of you when I read those bits and how disappointed you’d be. “He kissed her….and then it was morning.” Hahaha!

Alex: Ha! I almost put the book down!

Stacy: It’s like an old-school romance novel or something. Or a PG-13 movie. Fade to black!

Alex: It’s a waste of passion! Back to Marcia, I think those people exist, it’s just difficult to express them, because in the very nature of those encounters they’re unbelievable.

Laurie: Yeah, but we all like to think they exist.

Alex: It’s like when you’re a kid and you draw a person but no face.

Stacy: I think her paying for the entire day is what pushed it over the edge. The idea of Marcia is lovely — it’s the $500 she dropped on a stranger that’s the sticking point.

Alex: I have to say Stacy, that’s what did it for me, too.

Stacy: For the experience!

Laurie: What about the Churchill segment? There were bits that were beautiful: the isolation and extremeness of it. The image of her happily cycling round like a mad girl with townspeople waving at her. And those beautiful blue stones. It was such a strong sense of place Really made me want to go there, “beeeers” or not.

Stacy: I think Churchill was my favourite bit so far. Haha, aw, the polar beeeeeers.

Alex: I think so too. It felt the most raw. And like she was able to understand the most about herself.

Stacy: The feeling was so melancholy, but also hopeful.

Alex: Yeah, she has a talent for capturing that thread of hope in a situation of despair and isolation…

Stacy: An entire book with that all would be so great.

Laurie: So will we see more of those sorts of moments as we continue westward with Benny? We shall see!

Stacy: And no more Icky Mickey!

Alex: Hahaha! Until next week!

Laurie: Until next week!