A New Book About Knitting Tells A Good Yarn About Canada

In Unravelling Canada, historian Sylvia Olsen teases out individual strands of identity that run through Canadian knitting history and practice. 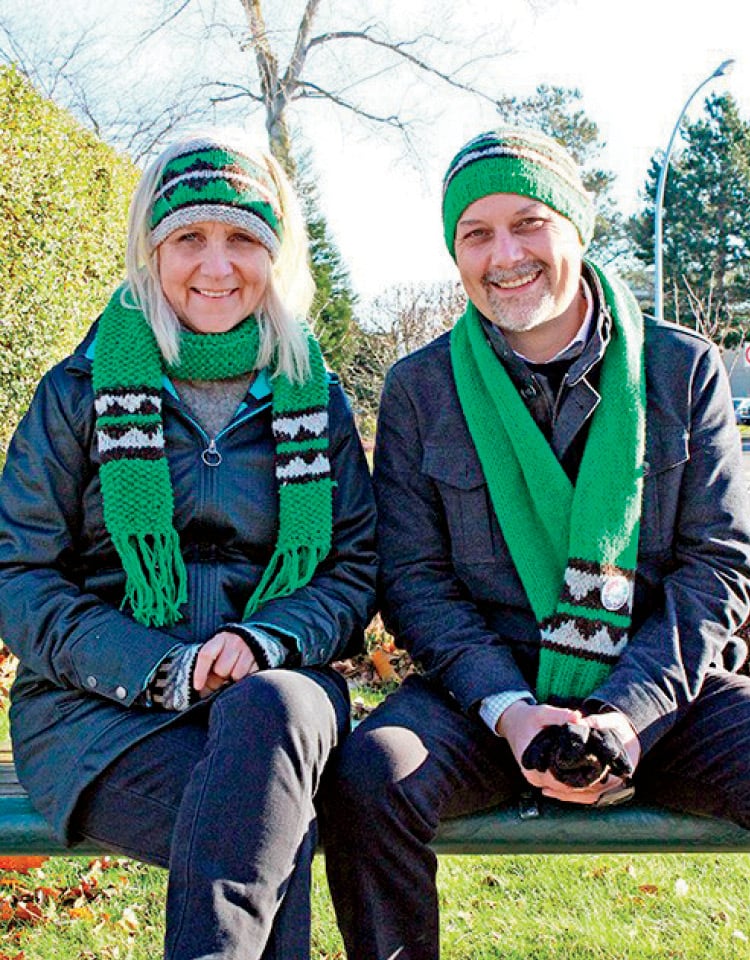 Sylvia Olsen and her son.

Fibre-related puns are a knitter’s birthright. Historian Sylvia Olsen obviously isn’t immune to their appeal—her new book is called Unravelling Canada: A Knitting Odyssey. But the cheeky title reflects a deeper purpose: to tease out individual strands of identity that run through Canadian knitting history and practice.

After marrying into a B.C. Coast Salish community, Olsen lived in Tsartlip First Nation for 35 years, where she learned the traditional colourwork technique its knitters are known for. When she began to research her master’s thesis on their work, including their world-renowned Cowichan sweaters, questions about identity, influence, authenticity and colonization kept resurfacing.

Coast Salish sweaters are crafted from undyed, hand-spun yarn in creams, browns and greys; they feature wide single-colour sections interspersed with bands of bold geometric or natural motifs. They became hippie status symbols in the 1960s, which led to commercial knock-offs and DIY patterns from mass-market craft companies, such as White Buffalo. By the ’80s, Coast Salish knitters’ income had severely eroded. “I maintain that if you want to teach B.C. history, the Cowichan sweater story tells it all,” Olsen writes. “It’s about contact and race relations, power, politics and passion, industry and economy, family, innovation and survival.”

In 2015, with these big issues in mind, she and her husband left Victoria on a tour across Canada, on a hunt for the oldest Cowichan sweater still in existence. The goal: Make it to Newfoundland in six weeks, hitting 40 destinations and teaching Coast Salish knitting techniques to almost 900 people along the way. Interwoven with Olsen’s road memoir are other knitters’ stories: boyfriend sweaters gone bad, healing through knitting and the joys of creating beautiful things with wool and two sticks.

Olsen asks hard questions about Canada and its colonial roots, and is honest enough to point some of those questions at herself. But she still celebrates what binds us all together. “If knitters represent what it is to be Canadian, then we are a country of hard-working, caring, creative people leading meaningful lives,” she writes. “We are intentional and brave, ready to hear the tough stories of our past and use them to forge a new future.”

Unravelling Canada: A Knitter’s Odyssey is out April 17.