5 Things You Should Know About 'The Testaments,' Margaret Atwood’s New Sequel To 'The Handmaid’s Tale'

We finally find out how Gilead fell (mostly). 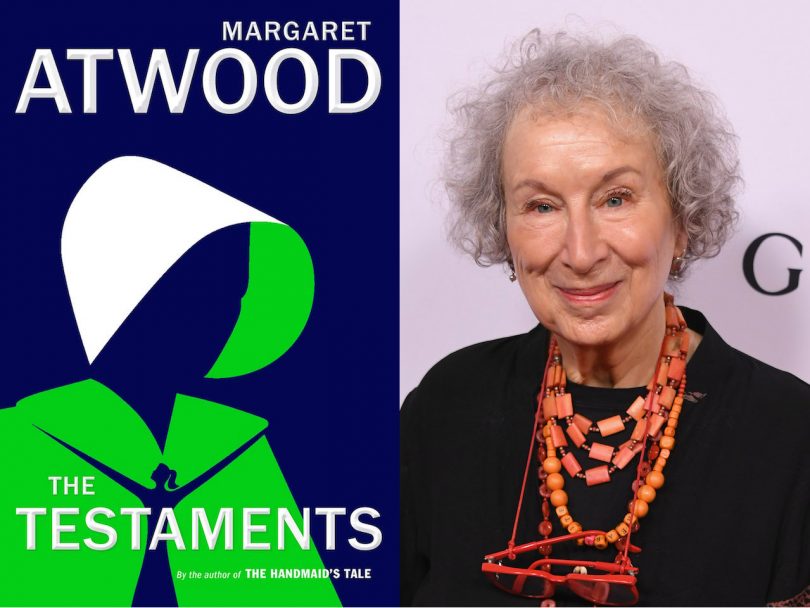 In The Testaments, Atwood finally returns to Gilead. Only this time, it’s to dramatize how the totalitarian regime you love-to-hate actually falls.  Set around 15 years after Offred makes her daring attempt to escape the totalitarian regime, the story answers many of the questions that have plagued readers’ imaginations for decades.

The wish-fulfilling destruction of Gilead feels like something of a hopeful tonal shift for the 34-year-old dystopian tale, which began life as a novel but grew into an era-defining franchise—thanks in part to the real-life resurgence of ideologies whose anti-woman stance make the handmaids’ plight feel all-too-real.

It’s a given that the much-desired sequel to The Handmaid’s Tale will be hungrily devoured by longtime fans of the novel as well as by the more recently converted viewers of the Emmy Award-winning TV series. The novel has already merited a rave from novelist Anne Enright in The Guardian, an essay in The New Yorker by Jia Tolentino and been shortlisted for the Booker Prize even before its release.

Here are five things to know about The Testaments—minus the spoilers.

Atwood wrote the sequel so you’d stop asking her what happened to Gilead. Also, because of Trump.

Never underestimate the power of hounding an author into writing what you want to read. After enduring more than three decades of fans petitioning her to tell them how Gilead came to ruin, Atwood finally put pen to paper to give ’em what they want. “The Testaments was written partly in the minds of the readers of its predecessor, The Handmaid’s Tale, who kept asking what happened after the end of that novel,” writes Atwood in the acknowledgments.

Thank, too, Trumpism and the political rebooting of certain patriarchal ideologies once thought vanquished for giving impetus to the novel’s writing. “The citizens of many countries, including the United States, are under more stresses than they were thirty years ago,” she writes.

You can say that again, Peggy.

This is not The Handmaid’s Tale. This is The Women of Gilead’s Tale

Like The Handmaids Tale, The Testaments takes the academic conference conceit as its frame but is essentially told via the voices of three central characters: Aunt Lydia, Gilead’s sadistic handmaid wrangler, and two younger women initially presented as Witness Testimony 369A and Witness Testimony 369B. It’s initially odd to experience Gilead from the inside—to take the emotional focus away from its most-clear victims, the handmaids—and to look at it from the perspective of those who do what they can to survive within it (including sacrificing others). The trade-off: you get a broader understanding of Gilead as a society that bases its power on varying degrees of victimization. The novel makes it clear that to survive in an inherently bad system like Gilead requires getting your hands dirty. The homework for critics and readers is to determine where that idea finds contemporary cultural parallels. (Sharpen your pencils, there’s a lot of ground to cover.)

We understand Aunt Lydia and something about the nature of villainy

Both the novel The Handmaid’s Tale and the TV series establish Aunt Lydia’s villainy (the TV series goes further to suggest her sadism is less about circumstance and more endemic to who she is), but The Testaments takes care to establish how an arch villain might be formed out of human clay. (Hint: it involves torture and terror and something called the “Thank Tank.”) Love her or hate her, through Aunt Lydia, Atwood goes some way toward explaining how regular people become terrifying functionaries in abusive societies.

Critics will spend a great deal of time pulling out the contemporary parallels in the novel, but let’s hope they don’t miss the pointed dig at Toronto’s reno madness. It comes via Witness Testimony 369B, who, despite being in a real jam, still has time to look in the rearview mirror of a getaway car and think, god, I hate gentrification. Says 396B: “Every house in our area was always being renovated; then someone would buy it and renovate it again…why spend all that money on tearing the guts out of perfectly good houses. …It was hiking up the prices and shutting poor people out of the market.”

Though the TV series, now extending into its fourth season, hasn’t exactly hewed faithfully to the novel from which it’s adapted, one can’t help but think that the series’ writers will be dog-earing certain passages in the sequel, which rather neatly wraps up the fall of Gilead and it does so in a way that complicates the overarching narrative. (Plus, the book itself is reportedly in development as its own stand-alone TV series.)

Will the Hulu series pick up Atwood’s narrative threads and run with them? If they do, which ones? It’s kind of a reverse Game of Thrones situation that will keep message boards alive for years to come.

Speaking of Game of Thrones….

With The Testaments, Atwood has dared to put to rest decades of fan theories about how Gilead fell. It’s a precarious position to be in because while she’s satisfying a deep desire for fans, she’s also potentially altering the legacy of her most celebrated work by not living up to the hype. While the novel offers readers a greater understanding of Gilead—its cost to its functionaries, even—the novel does not offer a compelling conclusion to The Handmaid’s Tale. Alas, it often reads like a detailed synopsis for promised dramatic action that never comes to life. The book moves to its conclusion on ice skates—swiftly and smoothly—on terrain that’s been cleared of obstacles that might make our protagonists stumble. In short, you will find out how Gilead fell (mostly) and what became of Offred and her children (mostly)—but it’s worth asking if the anticipation is better than the reveal.