The Snow Child is our next Book Club pick! 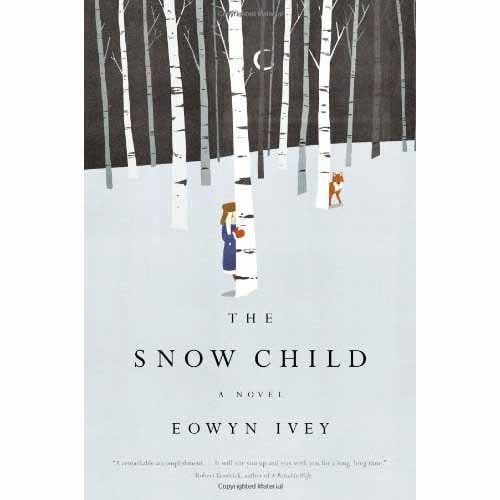 The hook: In the wilds of 1920s Alaska, an older childless couple spot a beautiful little girl accompanied by a red fox in the woods near their isolated cabin. But who can she be? Someone’s missing daughter? As the couple coax her into the open — and into their lives — they slowly come to realize the meaning of love, hope and friendship.

The plot: Longing for a solitary life after the heartbreak of losing a baby many years before, Mabel and Jack move to a remote Alaskan farm to begin homesteading. But their second winter in the forbidding North looms, the years are creeping up on them, and they fear they might not survive the cold again — or the emotional isolation. One night, they surprise themselves by frolicking in the the first new-fallen snow of the season and building a snow child. The next morning, they awaken to find tiny footprints outside and a girl hidden nearby who refuses to approach. Mabel becomes secretly convinced the girl is the snow child brought to life, and even the more prosaic Jack cannot explain how a tiny child could survive without any help in the wilderness. As the girl, Faina, becomes more and more enmeshed in their lives and dear to them, their hope that she will become a part of their family grows. But, as with every good fairy tale, darkness lurks in the shadows of the forest, and Mabel fears Faina will melt away with the coming of the summer sun.

The inspiration: While working at a bookstore, Ivey came across a children’s picture book inspired by the Russian folk tale about the snow maiden Snegurochka. “It was a very simple story, but such a revelation to me,” she says. “A fairy tale set in a landscape that could be my own backyard!” Ivey’s research into the story revealed many different versions and endings, which fascinated her, but she was also intrigued by the idea that the story let her “explore the complex relationship between people and the Alaska wilderness, survival and community.” She says, “I hoped The Snow Child would become a way for people to experience both the beauty and hardship of a rural life in Alaska.”

Talking points: The importance of family and friends, the essence of survival and appreciating the gifts of nature, the significance of loss and hope, the lessons underlying fairy tales, magic realism.