We've come to the end of our journey through time (well, sort of). Find out what our readers thought of the last part of The Map of Time. 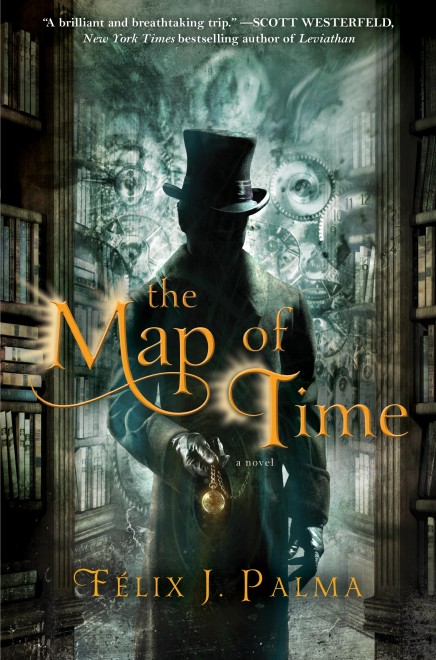 The Map of Time

We finally get some real time travel, and a whole bunch of plot lines were tied up. Here are our thoughts on the final section of The Map of Time.

Alex: I have no idea where to start with this!

Stacy:  I was so, so excited the “first” time HG time-travelled, and then I was disappointed because it was just Murray again, but THEN…

Laurie:  Well, I have to say, after all the false leads, I thought initially it was all a fake!

Stacy:  Me, too! We finally got real time travel. And, it was a totally unique method — using our brains instead of a machine.

Laurie:  But the big holes left by the weapons, and the knowing the first lines of texts from unpublished manuscripts and everything, well, it was TRUE!

Alex:  I am so unsettled by the “yes, we are time-travelling” and  “no, we aren’t,” that part of me still thinks it didn’t really happen.

Laurie:  But what other explanation was there?

Stacy:  Alex, I got that feeling too. Especially with the last few pages.

Laurie:  Palma was totally messing with you!!

Alex:  Well, I had just seen HG pulling the wool over Andrew’s eyes at the beginning. What’s to say someone else didn’t do the same to him?

Stacy:  That’s totally true. But when the wool was being pulled over HG’s eyes (when Murray kidnapped him), Palma wrote about it differently than when he wrote about Marcus and the real time travel, I think.

Alex:  I’m more concerned about the holes left in the bodies — that’s the harder part to explain for me.

Laurie:  The holes, the holes! It’s so X-Filesy.

Laurie:  I really don’t think those can be explained away. Cannons? And the letter from HG to HG…

Stacy:  Marcus did say he was from far in the future.

Laurie:  How to explain that…

Alex:  I don’t know how I feel about Marcus. I feel like he was kind of dropped on me a bit.

Laurie:  Marcus is a thief.

Stacy:  A rapscallion! (I have actually never used that word in conversation!)

Laurie: Love that word!! And yet, somehow, related genetically to HG when you think about it.

Alex:  I just mean, again, I felt that storyline came a little out of nowhere… but I guess that playing with the pace of the narrative like that is another of Palma’s ways of playing with our perceptions of it.

Laurie:  After all, he has the mutant time-travelling gene. Love the idea that HG is the father of time-travellers. So poetic!

Alex:  I know…but doesn’t he decline that path in the end?

Stacy:  I found this section really convoluted, but in a good way. Does that make sense? Like, yes, Marcus was dropped on us, but we needed him to answer all sorts of questions.

Laurie:  Yes, true, but I can’t help but feel that in some other universe, it plays out…

Alex:  This really is a love letter to HG Wells, isn’t it?

Stacy:  I think it does. Because wasn’t there that whole meditation on alternate universes? I feel that was there for a reason — but maybe that’s just my wishful thinking?

Laurie:  It is a love letter in many ways and to the whole time-travelling genre, with references to time lords, Sliding Doors, paths not taken, the other door, and so on…

Alex:  I liked that he picked up on themes like the parallel universes, which he’d set up in the beginning. And I found that also with the poop painting — I was like “ohhhhhhh.”

Stacy:  I liked all the loose ends he tied up (that, last week, I thought he had dropped).

Alex:  It was very satisfying.

Laurie:  It’s a very hopeful theme — the alternate universes, not the poop painting, that is!

Alex:  It is rather uplifting. And even his choice of vandalism really doesn’t affect anything — it washes off in the rain at the end of the day. I felt like that, too.

Stacy:  I found the relationships very hopeful — Andrew hoping/wishing/believing Marie Kelly is still alive, Tom and Claire starting a new life together, Wells getting a happily-ever-after, either with Jane (if he chose to stay in the present) or with…er, what’s her name? The one in the future.

Laurie:  It’s true. Almost as if nothing matters. And yet everything matters. And we’re still left with the inaction of Andrew, who is now just mooning at the dawn instead of helping the poor wretches in the gutter. God, I’m such a cynic.

Laurie:  But, yes, hopeful in many ways.

Stacy:  Let’s call it realistic, shall we??

Alex:  It does have this feeling that it doesn’t matter which path we choose, life happens and in pretty much the same way.

Laurie:  Part of me still feels wistful, longing for that time-travelling world.

Alex:  It made me read it from a slight distance, like I could see the whole picture and understand the benefits for all. You SO want to be a time-traveller, LG!!

Stacy:  I think those two things are linked: we wish we could time travel and change things (plus, it’s just really cool), but even if we could, life would play out much the same.

Laurie:  I do! There’s an inevitability, you mean, a fatalism. In that sense, maybe the time-travellers come anyway! See, a hopeful cynic! HG’s genes meet up with someone else’s genes down the road and, voilà, time-travelling red-haired girl!

Stacy:  Yes, fate! The idea that some things are meant to be, no matter what we try to do to avoid them.

Alex:  Exactly. And I guess it’s a bit like plastic surgery — in the end, how much do you really want to change?

Stacy:  Which is not something I’m totally down with in real life, but it makes for such interesting reads!

Alex:  I think it’s an interesting and challenging notion.

Stacy:  And is a huge trope within time-travel fiction.

Laurie:  One thing I thought interesting: Lucy Nelson ended up being the woman Claire thought herself to be: she was the one ready to take action and shoot Ferguson to put an end to the automatons — not such a dumb blonde! And she ended up with the smart man, too — a little guy!

Stacy:  I love when characters cast off the stereotypes they’re saddled with.

Alex:  I guess that’s echoing the whole circus theme…”Things are not always as they seem!” Especially the female characters, SLK.

Laurie:  Meanwhile Claire’s just making out in some boardinghouse with Tom…

Alex:  Never to be heard of again.

Alex:  LG, what was it like reading it a second time?

Laurie:  I actually enjoyed it even more. For the most part.

Alex:  Interesting… did you pick up on anything you skimmed over the first time?

Laurie: Well, there was that dig at the Twilight saga…

Laurie:  I would just say that the parts I found slightly dragging the first time, I found even more so the second time around. But that’s really just a slight quibble.

Alex:  I missed the rumpy pumpy in this part, SLK 😉

Laurie:  Lol! Palma’s very clever, and I love the time discussions. It’s so difficult to wrap your head around the whole time thing. And there’s fate and love and wants vs. needs. What’s really important in life. And how much control do we have over things, really? And longing: the longing of life and the sadness of that.

Alex:  LG, That’s a great way of putting it.

Stacy:  Interesting that the book is so concerned with mystery and mayhem, but the overarching themes are so very human and relatable.

Alex:  I think another thing that makes those issues ring so true is the fact that they’re so real in comparison to a world that’s so imagined. The book isn’t really my cup of tea, but for what it was, I found it very engaging and in areas very smart, so I give it a 3.

Stacy:  You’re totally right, AL. That’s what makes this book work, I think, and books like this one, too. There has to be something that feels real — even if the plot involves crazy, time-travelling Jedi mind tricks.

Alex:  Yeah, the themes are what really anchor it.

Stacy:  I really liked it, especially after finishing and having those threads tied up nicely. I’d say 4 out of 5, too. (I agree, LG: there aren’t a lot of books I’d give 5 out of 5 to.)

Alex:  Me, neither. I did love how this one began to really echo The Time Traveller’s Wife.

Stacy:  I didn’t make that connection at all! How so, AL?

Alex:  There was a real parallel of the fuzzy-headedness and the not knowing where the time traveller would wake up. And there were a few really emotive moments. I didn’t cry, though. Hence a 3 not 4 — I judge by tear count.

Stacy:  It felt entirely too light overall for crying, to me.

Laurie:  No, me neither. I don’t think the characters are well-developed enough for that, nor did the love ring true enough.

Stacy:  Very engaging. I think the middle bit was my least favourite, but at the end of that one I still wanted to read on.

Laurie:  I would read more by Palma, definitely.

Stacy:  Me, too. I’m interested to see what he does next.

Alex:  I found the stories in the first two parts of the book more engaging, although I did enjoy seeing how HG’s character evolved. I wouldn’t rush to read Palma again, but I think that’s because I’m not a huge fan of this genre — which, incidentally, I think he has a really good handle on. I liked the flamboyance of it a lot — it was bold and brave and made this book quite unlike anything else I’ve ever read.

Stacy:  I think it’s a huge point in his favour that he kept you engaged for the whole book (600+ pages!) when you’re not a fan of the genre usually.

Alex:  Well, you guys helped there 😉

Laurie:  Absolutely! I think that definitely speaks to his skill.

Stacy:  On to the next one!

Stacy:  But still in the past (just far more recent history!)

Laurie:  Yes! Up next: Miss Timmins’ School for Girls by Nayana Currimbhoy. Enjoy!

Next week: If you’re not quite ready to leave time travel and fantasy behind, we have some recommendations for books like The Map of Time and Felix J. Palma answers our questions. And then we start reading Miss Timmins’ School for Girls by Nayana Currimbhoy.