The award-winning author triumphs with a Game of Thrones-ish meditation on memory, marriage and revenge. 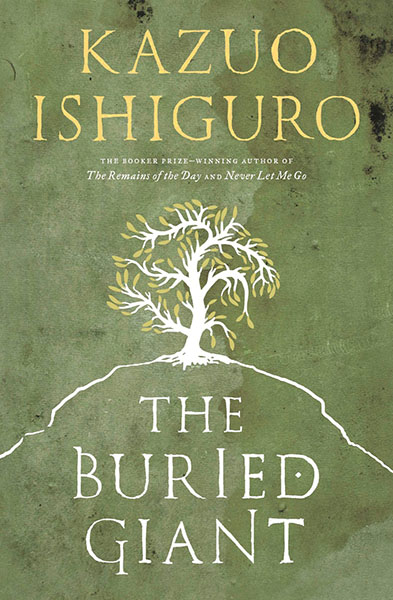 The Buried Giant by Kazuo Ishiguro.

When news broke that Kazuo Ishiguro was planning to release The Buried Giant in early 2015, readers swooned. This year marks a decade since the British author’s last novel, Never Let Me Go, a moving work of dystopian fiction that was shortlisted for the Man Booker Prize and adapted into a film. A new Ishiguro book is like a new release from Leonard Cohen or Terrence Malick — a rare, newsworthy dispatch from an elusive auteur.

Ishiguro’s latest novel might be thought of as Game of Thrones meets Away from Her (Sarah Polley’s cinematic take on Alice Munro’s short story about aging). It’s his first foray into fantasy, although the novelist is known to experiment with genres — before the lyrical sci-fi of Never Let Me Go, he tried his hand at detective fiction (The Unconsoled) and earned accolades (and a Booker) for 1989’s The Remains of the Day, a stately historical novel. This time, Ishiguro has turned to fantasy imagery — warriors, dragons and epic battles — in the service of a heady meditation on marriage, memory, revenge and the twilight of life.

Set in England shortly after the Saxon Wars, The Buried Giant tells the story of community elders Axl and Beatrice, who have become objects of their neighbours’ ridicule for reasons unknown to them and are forced to live in a darkened room. As it turns out, everyone in their village, young and old, is suffering from a kind of early Alzheimer’s. Parents can’t recall their children’s whereabouts, and arguments play on a loop as participants forget, remember and then forget again what they are fighting about. Frustrated, Axl and Beatrice set out on a journey  to find their estranged son, hoping he’ll trigger the memories they’ve lost.

This unusual melding of heavy themes and populist art makes sense for a novelist who claims to be highly influenced by pop culture. Ishiguro has worked as a television writer and speaks candidly about the films and music that have shaped his work: The Remains of the Day, for example, was inspired by a Gene Hackman thriller (The Conversation) and a Tom Waits ballad (“Ruby’s Arms”).

Marriage and memory have long been fodder for artistic examination (the critically acclaimed Julianne Moore film Still Alice is another recent example). And though it’s a little strange to encounter these themes alongside descriptions of knights and battle sequences, the looser logical constraints of fantasy allow Ishiguro to weigh the tragic impact of memory loss in a refreshing way. In this novel, he wonders if our romantic unions can weather painful reminders of infidelity, or if it’s better, sometimes, to just expunge them.

Ishiguro isn’t referring solely to marital trauma here. In The Buried Giant, he’s equally interested in how a society comes to terms with uncomfortable memories, turning the adage that those who forget the past are doomed to repeat it on its head. Instead, Ishiguro makes a somewhat fantastical proposition: Perhaps those who have witnessed the atrocities of war, domestic or otherwise, must forget, or else be doomed to a life of vengeance — and a world without peace.