'This is my truth': Roxane Gay's hard look at her body

Gay's new book, Hunger, is a raw and vulnerable account of the author's experience with trauma and how she has taken control of her own narrative. 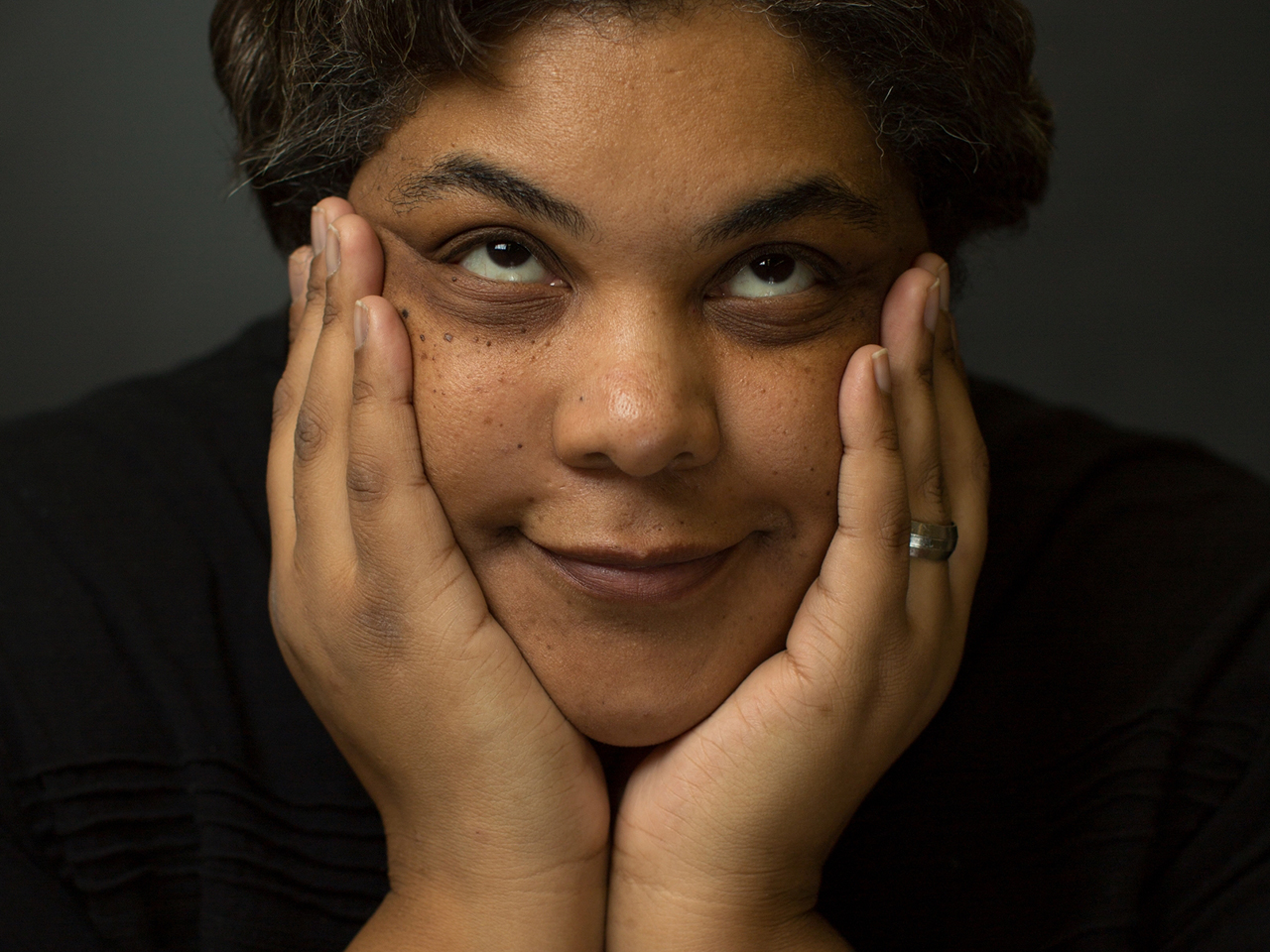 Every now and then you read a book that changes you. You aren’t the same person you were when you started reading it, and you won’t be again. For me, Roxane Gay’s Hunger: A Memoir of (My) Body, is one of those books.

“Every body has a history” she writes in the first chapter, which, comprising a scant 21 words, gets directly to the point. “Here, I offer mine.” What follows is a searing examination of the forces that have shaped her body — which, after being gang raped by her boyfriend and several of his friends at age 12, she fought desperately to protect. As she kept the rape a secret, food became her saviour.

“I understood, from the way I saw people stare at fat people, from the way I stared at fat people, that too much weight was undesirable,” she writes. “If I was undesirable, I could keep more hurt away… I needed to feel like a fortress, impenetrable. I did not want anything, or anyone, to touch me.” She chronicles the slow but steady uptick in her weight through her teens, twenties and thirties, to the deep disappointment of her parents, who knew nothing of her secret. At her heaviest, she weighed 577 pounds.

The author of Bad Feminist, An Untamed State and, most recently, Difficult Women, is no stranger to tough subjects, but she calls Hunger “the most difficult writing experience of my life… These are the ugliest, weakest, barest parts of me.” Gay offers that preamble in Chapter 2 as if to say to the reader, “Hey — buckle up. This won’t be easy.”

But even that warning can’t prepare you for the story ahead. Gay holds nothing back — there’s no distance from her pain, no position of triumph from which to view it from afar. When she needs to sit with her hurt, you sit with her. When it becomes overwhelming and you put it aside for a couple of nights, it feels like a betrayal — like telling someone who’s trusted you with their deepest secrets, their darkest thoughts, that it’s all too hard to hear, so maybe just put a pin in it?

Writing Hunger was an attempt to “undestroy” herself, she writes — to undo the damage of carrying her secret, and allow herself, at 42, to be seen and understood. She talked to Chatelaine about how the world views fat people, the complexities of body positivity and what it feels like to finally take control of her story.

This is, hands down, the most vulnerable piece of writing I’ve ever read. Did you ever have to fight the instinct to walk away from it, to protect yourself? You must have thought at some point, “I’m just not going to put myself through this.”

I wanted to take a hard look at myself and my body. I did think, about six months in, maybe I should walk away… exposure is scary. I didn’t want to give more ammunition to my critics.

What brought you back?

The need to tell my truth.

Once it was off to the publisher, did you feel relieved or terrified?

I felt relieved, mostly because I held onto the book until the absolute last drop-dead moment before the publication date would have to be pushed again. I felt relieved that it was out of my hands. And so far the response has been overwhelmingly positive. That has been very gratifying.

There’s a push and pull theme that comes up a lot in the book — you don’t know how your life and your eating got so out of control, and yet you do. You want to be invisible, yet need to be seen. You know what you want, but also what you think you deserve, which is less. What did writing this book teach you about exploring these kinds of tensions?

I don’t know that I’ve learned anything, I just know that navigating these tensions is something that requires patience and time and generosity to one’s self. You have to be as understanding of yourself as you are to other people and their humanity… so if anything, I’ve learned that I need to be kinder to myself.

You also examine some of the assumptions that are made about overweight women – why they are overweight, why they don’t lose the weight, that they want to be “fixed.”

Was this book a way for you to take control of this narrative?

My key goal was to tell my own story, rather than letting people tell that story for me. I get so frustrated that people think they know my story simply because they look at me and they have these preconceived notions and this cultural disgust about fatness. I resist that. I resist it vigorously. And this book is part of that resistance.

Before I finished writing it, a woman wrote a sort of review of the book, based on the publisher’s blurb, that said she was tired of this trope of women correlating gaining weight with protecting themselves. It’s not a tired trope. It’s my life. She was writing from a place of fat positivity and I very much believe in that, but I was really taken aback by her comment and this idea that somehow we have to make the truth into something it isn’t. This is my truth. It makes people uncomfortable but it doesn’t negate the fact that it’s my truth.

Do you feel like you now have control over your story?

Absolutely. I can’t hand the book out to everyone who stares at me in public but nonetheless it’s been very useful for me in terms of changing the narrative.

There are a few chapters which deconstruct weight-loss shows on television, like The Biggest Loser, and how media in general valorizes weight loss — any story about a fat person must come to a neat and tidy resolution. Your book is the exact opposite of this – there is no resolution, you don’t have it all figured out.

I definitely resist the packaged, tidy narrative that these shows offer about weight loss. . . . Even though it doesn’t look easy, it’s contained and controlled, it’s very airbrushed, and also very successful. There’s a clear arc of success most of the time. That’s not necessarily how weight loss works for people. There are a lot of ups and downs. And these shows take a service approach to looking at the emotional issues that come with living in the world in a fat body, which is a trauma, because the world is incredibly cruel. We don’t get to see a lot of that in the televised versions. So I’m trying to add more complexity and depth to the fat narrative.

What do you think about the trend of body positivity? Is it another way of telling people what they should think and feel about their body? I was thinking about this as I was reading the book – so much of the incredibly hard work you’re doing goes against the idea of unconditional self-acceptance.

I’m all for body positivity. I think it’s a much needed corrective to so many of the damaging messages that women — and men, too — face about perfect and ideal bodies. One of the challenges I have, though, is that, generally speaking, in the body positive movement, you’re not allowed to talk about weight loss. And I understand why, but — and I can only speak for myself — I need to lose weight. This is a fact. And it’s not positive to deny that fact. It’s not encouraging or supportive to deny that fact.

When I look at women who are embracing body positivity and don’t want to talk about weight loss, I get it — I’m like, if you don’t want to lose weight, you don’t need to, you’re beautiful as you are. But I also think that if you don’t feel that way — if you’re not there yet, not at the promised land of self-acceptance — there should be room in the conversation for us as well.

It kind of goes back to the idea of there being one narrative.

Exactly. There should never be just a singular narrative and there isn’t, no matter how much you try to force it. The term weight loss — I understand why it triggers people. So many of us have been forced into weight loss, and that’s also a trauma. So if some people need different language, I support that. I just use the terms for myself that I’m fine with.

You write that, when you were raped at age 12, you immediately learned that your version of the story didn’t matter.

And that sort of made me even more secretive. I had always been shy and quiet, but I almost shut down. I went through the motions of my life as a child and as a daughter, as a student and as a sister, but the longer you have a secret, the more you start to nourish it, and hold it tighter and tighter. And so I found myself very invested in this idea of having a secret and not sharing it with anyone. And it made what I had experienced, in many ways, become even worse, because I just thought, well, my truth doesn’t matter and perhaps those boys are right — perhaps I’m a slut and perhaps I did something wrong to beget this terrible thing.

Do you remember when that pattern of thinking started to change? And what allowed it to?

Time, maturity, reading and therapy. In my late teens, I started going online, and finding online communities of survivors of rape and sexual abuse and I started recognizing that I was not the only one who had been through this terrible thing. It really did a lot for me.

Yes. That is what it feels like. Alongside this book, I’m also trying to make changes in my life that will usher in my third act, if you will. It feels good to really take a hard look at myself. I’ve started to see a nutritionist and look at these food rules I’ve had for myself and all these really negative patterns of eating that I’ve held on to for a very long time. It’s the first time in my life I’ve ever tried to get help from a professional.

Your willingness to be so open and raw in this book will help so many people — which is pretty amazing, considering that it’s not prescriptive at all.

I was definitely not going to be prescriptive. That’s the last thing the world needs. First of all, I don’t know shit about weight loss. I know all the technical stuff, Lord knows I’ve been on all the diets — but I’m the last person who should give anyone any lifestyle advice. So I didn’t even try.