An excerpt from the journalist's just-released book, 'Had It Coming: What's Fair in the Age of #MeToo' 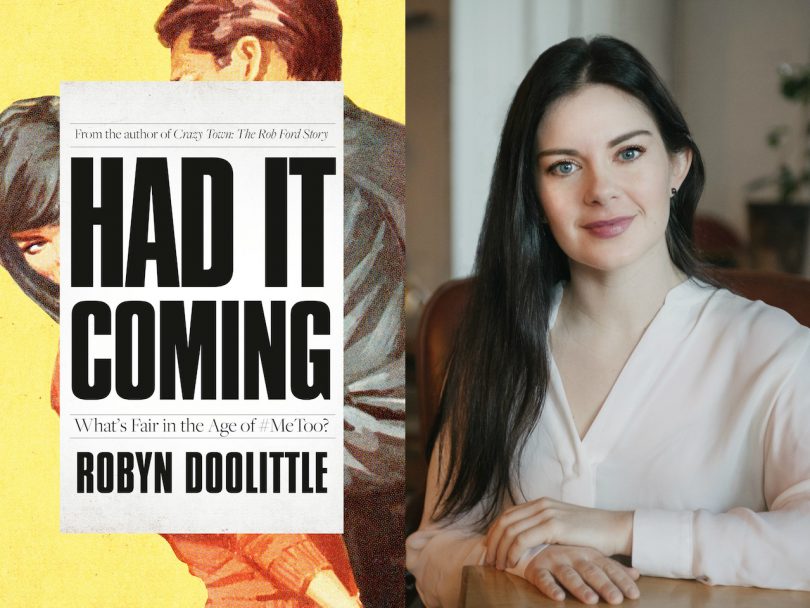 What often comes up in discussions of whether a person is deserving of a second chance is how it shifts attention away from the individuals who’ve reported harm. “We spend so little energy thinking about justice for victims and so much energy thinking about the men who perpetrate sexual harassment and violence,” wrote Roxane Gay in The New York Times. “People have asked for the #MeToo movement to provide a path to redemption for these men, as if it is the primary responsibility of the victimized to help their victimizers find redemption.” As Frida Garza observed in Jezebel following the Jian Ghomeshi essay, “The subtext is: ‘Okay, we’ve heard from the women; let’s hear from the men.’”

As I read Ghomeshi’s New York Review of Books piece, there was one woman I wanted to hear from.

Months earlier I’d spoken with Lucy DeCoutere, the first of Ghomeshi’s accusers to publicly identify herself, about her life since the trial. During that interview I asked her about forgiveness. “Is there anything he could do to make it right with you?” I asked.

“I guess show some kind of sincere understanding that some damage was done and it can’t continue,” DeCoutere said. “But he would have to call me. We would have to have a conversation. If he just gave some interview or wrote something—no, f-ck no.”

So naturally, when “Reflections from a Hashtag” dropped, she was my first phone call. DeCoutere told me she’d heard rumblings that Ghomeshi might be writing something. Part of her thought he might just try to ignore the whole scandal. Maybe he was actually reviewing a book or something. She was having lunch with colleagues—she’s a captain in the Royal Canadian Air Force and former actor—when she learned the link was live.

“I didn’t read it right away, but I was super curious,” she said. Later that day, when she was alone, DeCoutere pulled up the article. It was as disappointing as she’d feared. “He says he’s developed empathy. I believe he’s developed empathy—for himself. For others, I don’t think so. Because if he did, he would say ‘I’m really sorry, everybody, for what happened to you.’ Not ‘what happened to me.’”

What galls her the most, she said, is that “for sure he was on the internet watching me and the other people getting whipped to hell.” Why did he not speak up? Why now, when it was all over, could he not defend them in some way? (It’s worth mentioning again: Jian Ghomeshi was criminally exonerated in connection to DeCoutere’s allegation and the allegations of two other women. Another complaint was settled with a peace bond and an apology for “sexually inappropriate” behaviour. The former CBC host has denied ever physically hurting women.) DeCoutere recognizes that admitting wrongdoing can open a person up to civil litigation. But she wanted something. And she wanted that something to be real and raw, and to truly acknowledge that he’d done harm. Instead, Ghomeshi’s piece was entirely about the ways his life has changed. “And I’ve got tons of room for that,” DeCoutere told me. “I have no doubt that when things shifted for him, it was catastrophic… However, that was all it was.” No consideration was given to the way that her life—and her fellow complainants’ lives—were changed.

“How has your life changed?” I asked.

“I used to be a really light person to talk to, and I’m just not anymore,” she said. “I get trolled every day. That used to be a problem, [but] now I don’t really care… For the people who talk to me directly, no one has come up to me and said, ‘You lied.’ That doesn’t mean people don’t think that. It just means no one has said that.”

The trial went horribly, she acknowledged. “My testimony fell apart right before everyone’s eyes.” She’d gone into the process totally unprepared for what was coming and what was expected.

DeCoutere took to the witness box on Thursday, February 4, 2016, on the third day of the trial. So far the trial had been disastrous for the Crown prosecution. The first complainant was confronted with emails that contradicted her claim that she’d had no contact with Ghomeshi after he allegedly punched her in the head—a revelation that suggested the complainant was willing to withhold facts, instantly tainting the rest of her testimony.

After watching the first witness implode, DeCoutere’s attorney contacted the Crown to say that her client had also had “post-assault contact” with the accused. It would be a double whammy on DeCoutere’s credibility: first, because she hadn’t divulged that fact earlier. Second, it appeared she’d been paying attention to media reports on the preceding trial days, which witnesses aren’t supposed to do (DeCoutere said she respected the media blackout). Then during DeCoutere’s testimony, the defence revealed that the day after Ghomeshi was alleged to have choked her, the two had brunch together and then spent time cuddling in [Toronto’s] Riverdale Park—and took a photo of the cuddling. That picture was presented in court. There was more: she’d sent him flowers and a handwritten letter that ended “I love your hands.” All those details were absent from DeCoutere’s sworn police statement. Marie Henein accused DeCoutere of leveraging her new status as sexual assault activist to further her career.

In a final devastating blow, Ghomeshi’s defence revealed that DeCoutere had exchanged more than five thousand messages ahead of the trial with the third complainant. Among these emails was evidence that the two women had discussed the specific allegations. This was something the other woman had denied under oath. In the messages, they sometimes described themselves as a “team.” They wanted to “sink the prick.” Henein set the table for an inference of collusion.

When the not guilty verdict came down, the judge went out of his way to denounce the three complainants, branding them as liars.

The experience was humiliating, said DeCoutere. She told me she’d never intended to hide any correspondence with Ghomeshi; she had just forgotten about it. And no one had told her she wasn’t allowed to speak to the other complainants, she said. As for the cuddling and the flowers, she told me that at the time, she didn’t understand why those details were important. “It was never explained [to me by the police or the Crown] that ‘you might have done stuff that was embarrassing, and maybe it looks bad. It doesn’t matter, just tell us everything.’” She didn’t realize that you get only one chance to make a complete statement, and that everything after that would be taken as suspicious. She thought she’d have a chance to elaborate later on if needed.

“My health took a serious blow. My psyche was pretty much destroyed for a while—have you ever met Marie Henein?” DeCoutere said. “She took the worst part of me, in my opinion, and that was in the letter that I wrote to him. It would seem I had a needy, clingy insecurity. She threw it in the air, splayed it on the courtroom floor, and then tap danced on it while it was live tweeted to the world.”

For months DeCoutere didn’t go out. She didn’t talk to friends. Strangers bombarded her with equal numbers of appreciative messages and death threats. Hundreds of women emailed her detailed stories about being raped. Now, more than two years later, DeCoutere said she’s mostly pulled herself out of the pit. She’s heartened by the fact that people are talking about sexual misconduct and consent in ways they never did before, and that the media is taking a more nuanced and intelligent approach to these stories. All of that came about because she and others came forward.

“He knows I was telling the truth. He knows I was getting pummelled from it. He also knows I’m having a good life. I’m an officer in the air force. I have great family and friends. That is fun.”

Jian Ghomeshi twice tried to come back from his sexual assault scandal and twice failed after neglecting to show genuine contrition. People didn’t believe that he was sorry about anything except losing his status.