Your readers — Laurie, Alex and Stacy — talk about part one of Miss Timmins' School for Girls and all its secrets, mysteries and quirky characters. 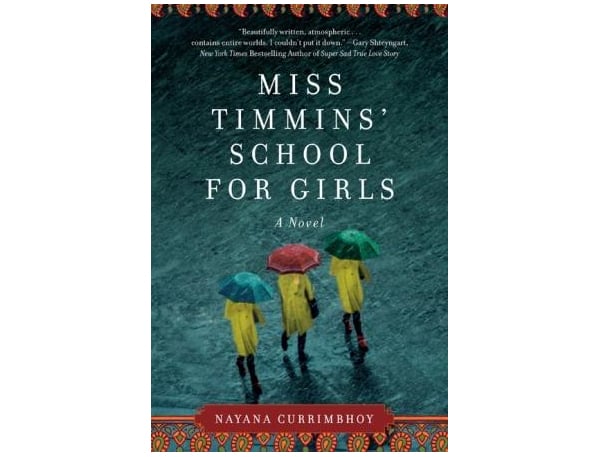 Gathering together around a meal of Indian food is the ideal way for Alex, Stacy and me to discuss Nayana Currimbhoy’s Miss Timmin’s School for Girls. The novel is part murder mystery, part coming of age tale set at a monsoon-soaked missionary boarding school in 1970s India.

The cast of characters includes young Charulate Apte, who is new to both the school and teaching, rebellious gym teacher Miss Prince, principal and perennial purse-toting Englishwoman Miss Nelson, pot-smoking journalist Merch, and schoolgirl detectives Nandita, Ramona, Akhila and Shoba. The action kicks off when Charu arrives at the school to teach Macbeth to the girls and finds herself falling under the sway of the mysterious Merch and strangely compelling Prince.

For our part, we munch on naan bread and agree the dal is delicious as we contemplate Currimbhoy’s skill at gathering together these diverse characters and plotlines…

Alex:  Hi. So…. Miss Timmins’ School for Girls. Not quite my British secondary school experience, although mine was also single sex.

Stacy:  Ha, not at all my secondary school experience! Mine was public and co-ed and very Canadian.

Stacy:  However, this was an interesting counterpoint to the Harry Potter boarding school experience, which in my head is what all British boarding schools are like.

Alex:  It was kind of magical in places. Extremely enchanting, even.

Laurie: True! Plenty of that, and I’m glad you think so. I wasn’t sure what you would think — like it, not like it…

Alex:  I love the complexity of the relationships.

Laurie:  Great! I really enjoy Currimbhoy’s writing. I think her writing has a great rhythm, and I like the characters and their interplay, plus the setting!

Stacy:  Me, too, and I feel like we’re really getting to know the characters we’re reading about. Was I the only one who found Merch’s perspective of Charu (in the prologue) and her own narrative (in Part 1) kind of jarring? Not in a bad way, more like it’s funny how we see ourselves versus how others see us.

Alex:  Miss Apte’s relationship with herself, her parents, her superiors and Prince. I kind of like that the difference in perspectives.

Laurie:  It was interesting to see that. I expected something very different of Charu from Merch’s description.

Stacy:  Me, too! Someone much more bombastic and outgoing

Alex:  I get the impression Merch’s feelings towards Charu change a ton over the course of the book.

Laurie:  But I loved that. I think that’s so true to life quite often.

Alex:  And I get that she’s already really developing and blossoming.

Laurie:  I love that sense of development away from her parents and in a new totally different environment.

Stacy:  I loved Charu’s inner monologue while teaching — suddenly I have a lot more respect for my own teachers in high school, faced with a roomful of hormonal, know-it-all, almost-adults.

Laurie:  Hahah! So true, the perspective you gain as you get older! Such a shame you don’t have it when you’re younger, too, really.

Alex:  It was interesting measuring her personal developments against her professional ones. The more she learned about life the more equipped she was.

Alex:  I love the dark, seedy scenes that were painted.

Laurie:  Yes, and the weight of the monsoon over everything, the intensity of the rain.

Alex:  And she suddenly begins to see that the adults know best when her perspective of Prince changes. I feel the darkness and the scandal of it.

Laurie:  I loved the scene where she goes out in that first rain — and eventually realizes everyone else is just watching.

Alex:  Yes! I feel like the darkness and seediness reflect her feelings.

Laurie:  It’s a shame, really, to have that freedom reigned in. Because it was freedom. Alex, you would like that seediness!

Alex:  That time when you feel those first stirrings of attraction and you don’t know what to make of them.

Laurie:  She’s so caught off guard.

Alex:  It’s not really as wrong in our context, and it wouldn’t have felt too forbidden if she was older, but in that moment it is so perfectly tormenting for her, and it’s beautifully captured.

Laurie:  Which is why the time setting is so perfect, and the place…

Stacy:  The whole setting — this isolated village in the middle of nowhere, the constant rain — is so evocative. I was reading over the weekend and it was sunny and bright and summer, but I felt I could almost hear the rain, I was so into the book.

Alex:  I love that the rain makes it possible for them to explore each other and their bond.

Laurie:  It’s perfect. Currimbhoy captures beautifully the feeling of the rain and how it isolates them, surrounds them and forms a shield for them. They’re trapped there, and the isolation makes it ideal for the romance — and the murder!

Alex:  Also, the darkness of returning to her family. I hope her mum gets better!

Stacy:  Yes! There are all these different types of darkness — the Wagle family has secrets, Shankar has secrets, Prince is a complete mystery.

Laurie:  And how subtly was that introduced — the mother who never wrote all of a sudden writing little letters…. Nothing is as it seems; everyone has secrets.

Stacy:  And even Merch, to me, has more of a story than we know.

Laurie:  So true, no? What is Merch’s story? Now there’s someone I want to know more about: Mystery Man.

Alex:  Indeed. I want to know what’s up with her dad.

Stacy:  And even little things like, why is he one of the few “outsiders” allowed to teach at the school? And a girls school, in 1970s India at that! But the big mystery for me, the one I keep thinking about, is totally the obvious one: what is up with Prince and her parents? And how does Miss Nelson get involved?

Alex:  What is up with Prince and Nelson?

Stacy:  Or how is Nelson involved, rather?

Alex:  Also, I keep waiting for the murder.

Alex:  Haha. I am still a bit confused about it.

Stacy:  Exactly. And someone with a bit of privilege in terms of where she can go/what she can do. It’s not like Prince is “stuck” there like Charu is.

Laurie:  We actually haven’t gotten to the murder really…. Next page of the next section?

Stacy:  And interesting how we don’t really see it. It’s just mentioned on the first page of the next bit.

Stacy:  It makes it all the more interesting and mysterious.

Laurie:  I think Prince is lost, lost in terms of what to do. She doesn’t know “who” she is and so what she should do.

Alex:  I think I witnessed it but I’m not certain who it is… is that where I’m supposed to be?

Laurie:  We’re just before it, the murder, is announced….

Stacy:  The girls just saw Prince smoking pot, and then Nelson in her PJs…

Laurie:  Everything is just so evocative….I actually looked up Panchgani (it is a real place) and it pretty much looked the way I pictured it…

Stacy:  Ooh, now I want to see pictures. I usually tend to avoid doing that in case it doesn’t look like how I imagine it.

Laurie:  I just did it after reading things two times.

Alex:  That gives it an extra dimension of reality.

Laurie:  Nelson in her PJs with her purse!!!

Alex:  Such a funny image!!

Stacy:  I love Nelson and that purse!!

Laurie:  And the way her bottom follows her seconds after!

Stacy:  And there’s a line (in Part 2 I think) about how she probably puts on her pearls to go to the bathroom.

Alex:  It made me think: I’d never go back to high school.

Stacy:  From the front she’s proper, but from behind…

Laurie:  Such fabulous description. Me, neither. Horrible! I have a friend who’s a high-school teacher and I don’t know how she does it.

Stacy:  So true, Alex. She got the voices of the children down.

Laurie:  I love Nandita! So funny! I thought she did their voices really well. And those damn bloomers and elastics! (Am I getting ahead of myself?)

Stacy:  And not just how they said things, but the kind of things they’d say and do. Laurie, you might be… but I also think it’s hilarious.

Alex:  I love the secret lives of teachers. Re bloomers: Interesting and shocking detail!

Stacy:  Alex, I love the secret lives of things in general — juicy secrets and such.

Alex:  It is interesting that she points out her observations like that very directly to the reader. You don’t have to deduce it: she spells it out, i.e. when she talks about how they created the Victorian school of their childhoods.

Laurie:  So bizarre! And why, you ask, why, would they make the students do things like that? So pointless. And Scottish dancing. Currimbhoy inserts some very funny moments here and there.

Stacy:  But it’s a very colonial attitude. And the food, and the whole “British is better” attitude — so true to life.

Laurie:  And the food is such crap.

Alex:  It’s so weird. All school dinners were terrible. There was no Jamie Oliver in those days to start a Food Revolution.

Laurie:  And yet they have such yummy sounding food at home! Such a waste.

Stacy:  Miss Timmins is in desperate need of a Jamie Oliver. A ’70s version with mutton chop facial hair and bell bottoms.

Laurie:  What did you think about Charu’s blot?

Laurie:  She goes on about it over and over.

Laurie:  It keeps her on the outside, an observer. In one way, it’s her safety net. In the other way, a hindrance. It seems to flare up when she’s under stress.

Stacy:  Well, at the time (and even now I think), for many women your face is what gets you through life. She can’t hide that “flaw.”

Alex:  It’s also what got her an education, because she couldn’t be married off.

Laurie:  She notes that before the blot, she didn’t smile necessarily, but after she got it, she always smiled. Yes, it made her work hard, in school, and with others.

Stacy:  So true! It’s what gets her out of the life all her cousins (especially that perfect Timmins’ girl one, can’t remember her name) have.

Laurie:  And certain people — Merch, Prince — don’t care at all about it. Yes, she’s marked.

Stacy:  I found it interesting that when she and Prince start their relationship, it changed a lot (got darker, the edges spread), basically got more obvious. But she began to care less and less.

Alex:  Yeah, in some ways she was accepting herself finally.

Laurie:  Interesting observations! And it will be interesting to see what will happen now that the murder has been committed. Whodunit! Tune in next week to find out more!

Stacy:  Until next week!

Alex:  Yes, indeed. The guessing is on!!