Our next Book Club pick! A Tale for the Time Being by Ruth Ozeki

Japanese pop culture, fiction and non-fiction all mash up in this genius novel about hope and friendship. 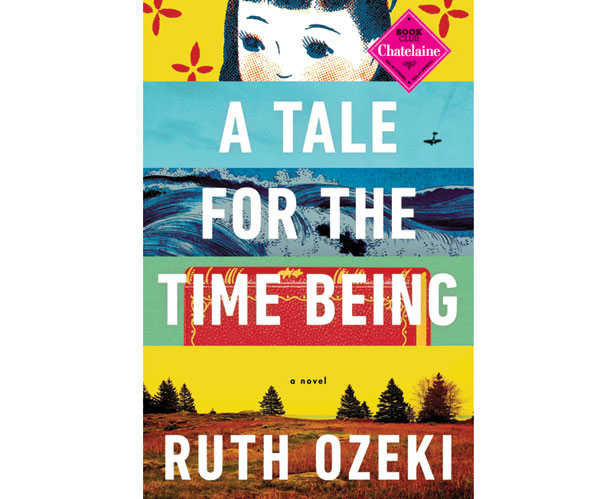 A Tale for the Time Being by Ruth Ozeki

After a devastating earthquake in Japan spawns a tsunami, a Hello Kitty lunch box washes up on the shore of an isolated island halfway around the world. The box triggers a fateful collision of two lives: those of Nao, a Japanese teenager with suicidal tendencies, and Ruth, a writer living in British Columbia.

What it’s about: The lunch box holds journals containing Nao’s innermost thoughts. Ruth discovers the words within and embarks on a journey of translation. Nao is charming but self-destructive, and Ruth is compelled to keep reading to discover what happens: How were Nao and the lunch box separated? Where is Nao now?

Why we love it: Nao’s cheekiness draws us in, as does her love for her 104-year-old great-grandmother, Jiko, whom she describes as a “famous anarchist-feminist-novelist-turned-Buddhist-nun.” Despite Nao’s troubled nature, she’s determined to capture Jiko’s extraordinary life on paper before ending it all. Ozeki has great fun in this novel: first-person chapters by Nao address the reader directly, while Ruth is strikingly similar to Ozeki (both have the same first name and husbands named Oliver who are artists; both are of Japanese descent and live on B.C. islands). Fiction and non-fiction blend and dissolve, creating an intriguing, fluid form of storytelling.

The inspiration: Ozeki was studying essays about time when her husband, artist Oliver Kellhammer, sent her a link about Japanese cafés in which the waitresses dress up as maids. Ozeki says she was suddenly “immersed in the world of Tokyo cosplay, manga and anime,” which led her to the subjects of bullying and teen suicide. “I was also reading about kamikaze fighters, thinking about 9/11, watching the U.S. war on Iraq unfold and living on a remote island in B.C. with my husband and cat. Somehow all these factors converged, and the novel was born.”

A Tale for the Time Being, Ruth Ozeki, $30. Available at Indigo.ca and Amazon.ca.

We’re giving away copies of Ruth Ozeki’s A Tale For The Time Being! Follow Twitter.com/ChatelaineBooks on Thursday, March 14th at 12pm to take part.