No One Is Here Except All of Us by Ramona Ausubel

It is the evening of September 3, 1939, some 48 hours after Germany has invaded Poland. For Zalischik, a tiny Romanian community of nine Jewish families, certain danger awaits. 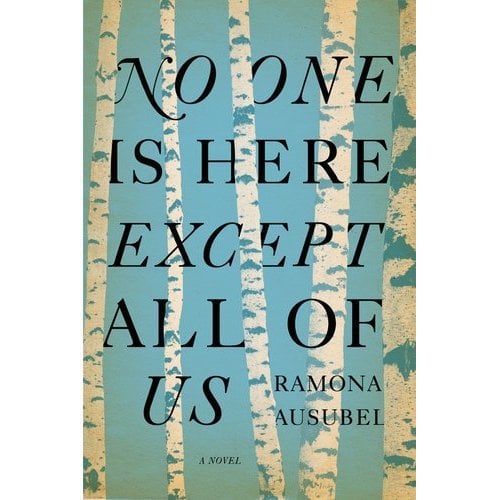 No One Is Here Except All Of Us

It is the evening of September 3, 1939, some 48 hours after Germany has invaded Poland. For Zalischik, a tiny Romanian community of nine Jewish families, certain danger awaits.

Then a stranger washes up on the banks of Zalischik’s river. Half dead, she speaks of overwhelming loss: her town ransacked, her family tortured, then killed. The villagers panic and consider fleeing, but our intrepid 11-year-old narrator, Lena, insists they stay: They will avoid the war by rewriting the future and imagining that the next day is the first day of the world. Their complete reinvention will assure escape: Yesterdays will be wiped clean; past events will be traded instead for prayers of the best possible now. Let there be light. Let there be no insecurity. Within seven days, a new world will be built. And it will be good.

The poetic fantasy unfolds to ward off outside horrors. Into the river go watches and radios. Letters and newspapers cease circulation. Lena leaves her family and joins a childless household, playing the role of a much-longed-for baby who has the curious ability to grow into her preteens almost overnight. And in the seemingly perfect, fable-like bubble the villagers create, fear loses its foothold. Their new world is strong enough to keep the real world and all its dangers at bay.

Or so the villagers hope. But the make-believe lasts only until reality collides with the reveries. Lena, who in a few short years grows from a child into a teenage wife and mother, must flee from her fiction to find her husband, a newly captured prisoner of war. She searches for sanctuary, but the outside world tests her storytelling. Can she start a new chapter with two starving babies?

The restorative power of imagination in this stirring debut novel is as disquieting as it is captivating. No One Is Here Except All of Us reads like the epic tales of our mothers’ mothers because it is inspired by the author’s grandmother’s stories. But as Ramona Ausubel shows us, so often memories trump facts, meaning the “bigness of being alive” is what takes precedence, the unseen overpowering what is before us, begetting its own form of truth. And it is good.