Buckle your seat belts. Margaret Atwood takes us on a trip through cyberspace and discovers a place where equality might (finally!) be taking flight. Prepare for liftoff! 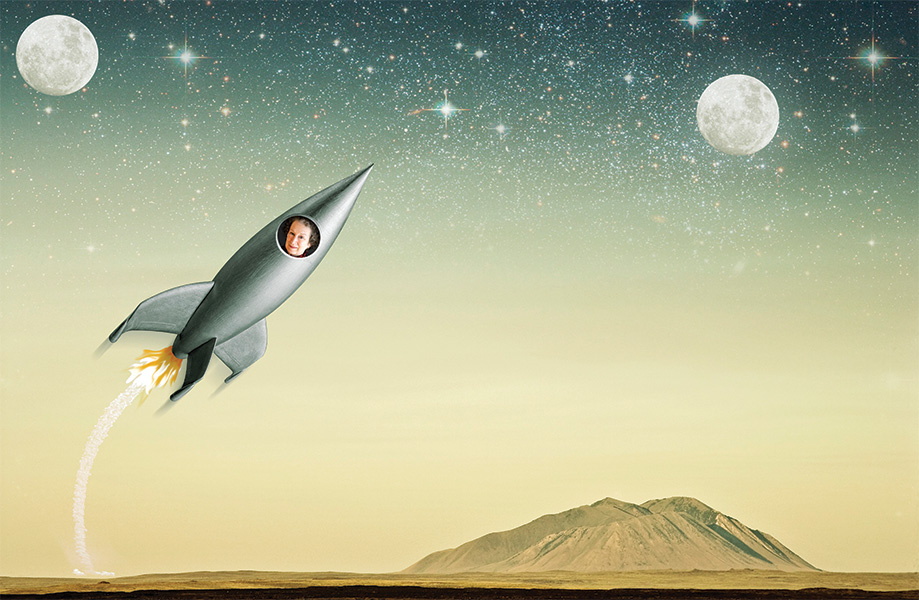 Think of it as a kind of Star Trek that you can explore in your own invisible spaceship, checking out the various planets, beaming yourself down to meet the inhabitants, then beaming yourself up and away when they turn unfriendly and start hurling the carnivorous tomatoes.

I spend much of my virtual-world time on Planet Book, as you might expect, but I also hover in and out of Planet Genderland. Not surprisingly, the two planets sometimes overlap. Right now, in that intersection of penumbras, the blogosphere is all alight with chit-chat and rampage on the subject of gendered book covers. Ever since a young writer called Maureen Johnson issued a challenge to her followers via Twitter — flip the gender of a well-known writer and then supply the kind of cover you think the publisher would put on that book — the folks on Planet Book have been devising covers for the likes of Jane Franzen (Freedom with a Valentine heart and a girlie-girl running) and Willa Golding (Lord of the Flies in baby blue and pink, with a cute toy pig), and sterner cover images for such writers as a regendered Lauren Oliver: L. Oliver’s cover for Before I Fall, for instance, has morphed from a lovely girl face to a hard-edged black and white blood splotch. (Female author names often default to initials, as they have historically.) You can join the fun by searching Coverflip.

It’s funny enough, but behind it is serious business. In fact, behind it is business. Once upon a time publishers would give female authors — non-romance writers, anyway — covers that attempted to make them seem more respectable by making them seem more male, or at least more sober. Geometric designs, abstracts and so forth; not a lot of giggles, and not a lot of flowers either, flowers being a signal for passive sexuality, prettiness and frailty. But then along came chicklit, the great-great-granddaughter of Pride and Prejudice, and it dawned on the publishers that teenaged girls liked to read about teenaged girls. Suddenly there was gold in them there hillocks, and the covers mutated accordingly.

“Coverflip” could apply just as well to genre as to gender, with seriously literary novels by women being done up in flowers — despite their actual content — to make them more appealing to a target market that might not otherwise attempt to read them. Then there are the many genre divisions and subdivisions now on offer. Paranormal romance? Mr. Darcy with special powers. Vampires? Oh, so sparkly in the sunlight now, and no more bad breath. S&M for women? Sacher- Masoch in an expensive suit and high-quality grey silk tie, all for the sake of you, you, you and your multiple oh-my-goodness orgasms; and P.S., he’ll take you shopping, as well. Westerns? In a genre once dominated by male writers and the riding-into-the- sunset ever-lonesome hero, there are now lots of handsome cow- boys who’ll end the story with an arm-tightening clinch instead of a saddle-securing cinch. Jungle adventure? Archeological mystery? There’s bound to be a chick version. Wherever you look, there’s gold in them there thrills. And frills.

There are still a few genre for- tresses holding out. Crime novels, though strewn with such female bestsellers as Agatha Christie and Ngaio Marsh in days of yore, probably now have more male writers than female ones; thrillers and war novels likewise. It’s hard to stick a pastel floral cover on a war epic, and mostly the publishers don’t try it. As for sci-fi, there’s been a recent fracas about the boys’-club behaviour of male writers toward their female colleagues, both at public events and online. Women simply don’t understand the genre, say the hard-liners; not only that, they’re corrupting it with yucky feelings. Don’t they see the sign on the tree house door? Loathsome Gurls Keep Out! Unless they’re prepared to enter as characters, to be maiden- rescued or splayed and raped or whatever, the Bs and Cs should just keep the F away from the clubhouse, is the warning. (On Planet Sci-Fi you have to swear, it seems, to demonstrate the hardness of your line. Or the hardness of something.)

Meanwhile, over on Planet Book Reviewing there’s grumbling in the ranks. With only about 20 percent of fiction book readers being male, why are over 70 percent of the books covered in newspapers and periodicals written by men and, indeed, reviewed by men? Do men really write better, and to what extent? There’s a practical explanation or two for the preponderance of male reviewers. Women writers are likely to have less free time to spend on a relatively poorly paid enterprise such as reviewing, and they are also less likely to band together in schools and squadrons to attack perceived enemies. Unless they have permanent jobs as reviewers, they may be unwilling to lay it on the line in the form of a bad review that may create more literary enemies for them than they’re equipped to handle. Yes, we did see Uma Thurman overcome a hundred martial arts experts with her super-sword in Kill Bill, but, frankly, that was ballet.

Leaving Planet Book, I squeeze into the invisible spaceship again and take a quick warp-speed trip over to a specialized enclave: radically feminist books written by men. Who could deny that The Girl with the Dragon Tattoo and its two sequels show more cold rage against sexual injustices inflicted by predatory men on vulnerable young females than anything else you’re likely to read? The author: Stieg Larsson. Had a woman written these books, it’s more than likely that she’d be dismissed as a sick man-hater, or worse. Then there’s Stephen King, who’s authored more than a few novels in which the central character is a woman battling against abusive and indeed criminal men — Dolores Claiborne, Lisey’s Story, Rose Madder — and, more recently, “A Good Marriage” in the collection Full Dark, No Stars. Of these, Rose Madder is perhaps the most extreme: Again, a female writer would have to think long and hard before putting herself into the Uma Thurman postion.

The most hilarious statement along these lines is by indefatigable online fencer and six-handed author Chuck Wendig, in his blog terribleminds. In four thoughtful and also profane posts, he took up the rapier on behalf of the beleaguered female sci-fi writers, urging his fellow male writers — with many an expletive — to fling their capes across the nastier mud puddles of sexism and misogyny by recognizing the humanity of their female colleagues. Men should do this because they need to get other men to man up. As he notes, “When a woman says stuff like this, they might also get credit for being brave and standing up, but then they also get a tide of venom sweeping over them — sometimes in the form of rape or death threats.” Ay, there’s the rub. The rape threats. The death threats. And, not incidentally, the real rapes and the real deaths.

The first wave of the women’s movement — in the 19th and early 20th centuries — was focused on acquiring political power through the vote. The second wave —  dating from the late ’60s — was about asserting various other forms of equality. (“Housework is work,” reproduc- tive control, equal pay for work of equal value, gay rights, the freedom to not wear lipstick and much more.) Both waves triggered pushbacks, including hopeful assertions that now women had achieved X, their cause was won and they could sit down and shut up. “I’m not a feminist, but . . .” became a meme; then just “I’m not a feminist.” Who wanted to be thought of as mean, humourless and hairy-legged? The spin doctors had been active.

On Planet Genderland, there’s now been a resurgence. Young women and also young men are taking up the cudgels, largely through blogs and social media but some- times on more traditional platforms. What’s been the trigger? Perhaps the internet has been a factor. Events that once would have been skimmed over or blamed on the female victim have gained worldwide attention: the death of a young woman in India from a gang rape on a bus; the attempted murder of a five-year-old girl who was kidnapped and raped; the rape of a 16-year-old girl by some Ohio high school football players; the suicide of a Canadian teenager who was bullied online after she was raped; the all-too-frequent murders of aboriginal women in various countries. Many cases are attracting charges of police inaction or indifference. They are also fuelling indignation, outrage and protests, and the public is pushing those in power to take action.

Is this a true tectonic-plate Earth-altering shift? Will things really change for young women, and change positively? Or will they change for a little while and then change back? My invisible spaceship doesn’t have a time travel button, so I don’t know. Neither will I likely be around long enough to see how this wave turns out.

In the immediate future, however, I’m sanguine: I man- aged to banish the pink and white flowers originally proposed for the book cover of my forthcoming novel, MaddAddam. What have I got against flowers? Nothing. But it’s not about flowers.

Coverflip: A playful reimagining of bestsellers as if they were written by women (original covers on left): Freedom by Jane Franzen gets hearts and a girl twirling. On the Road by J.Kerouac shows girls on a roadtrip (in a powder blue car, no less). Willa Golding’s Lord of the Flies features a little pink pig. 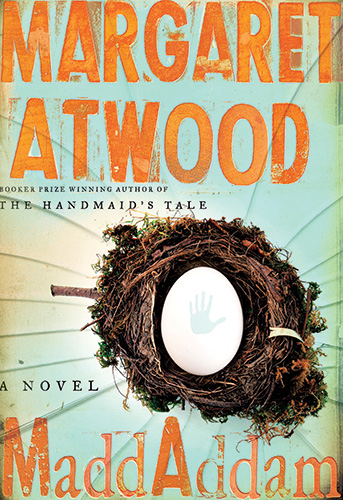 In MaddAddam, Margaret Atwood returns to her sharply imagined post-apocalyptic Earth, where the buildings are crumbling to rubble and the bones of those who perished in a human-made plague poke through the weeds. It is the third and final book in her trilogy (preceded by Oryx and Crake and The Year of the Flood) and reunites a small band of survivors who join forces with the Crakers, a bioengineered race of gentle blue-hued plant-eating people. Atwood chronicles their quest for a new start amid the ruins of civilization in what one can only hope is not a prescient take on the consequences of scientists playing God in a misguided attempt to save the planet. For respite, she offers humour in the childlike innocence of the Crakers and hope in the overarching love story between returning heroes Toby and Zeb. An absorbing, thought-provoking read from beginning to end.  — Sydney Loney