Life (and death) lessons in Kate Atkinson's A God in Ruins

The acclaimed British novelist delves into the emotional aftermath of war and the allure of paths not taken. 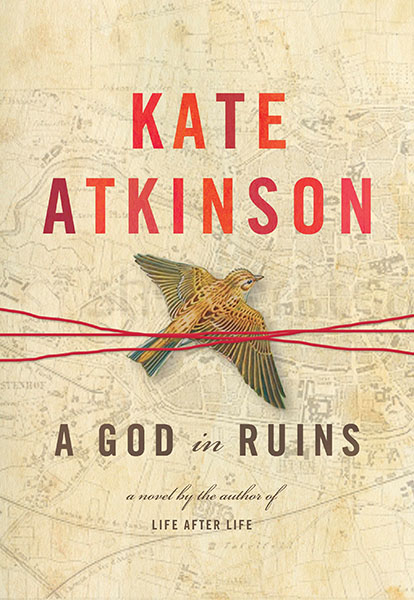 Life after Life, Kate Atkinson’s enthralling and bestselling 2013 novel, hinged on an idea that was at once irresistible and perilously gimmicky. Her protagonist, Ursula Todd, underwent a series of reincarnations, with each rebirth presenting the opportunity for a do-over. Through Ursula, Atkinson asked a powerful question: How should you live when you have endless second chances?

A God in Ruins, the latest book from the multi-award-winning Edinburgh-based author, is described as a “companion” to Life after Life. Here, the focus is on Ursula’s younger brother, Teddy Todd, a wannabe poet, Royal Air Force pilot, husband and father. For Teddy, there is no mystical hocus-pocus, no literal rebirths. Instead, he is remade through another kind of miracle. He survives World War II and the Blitz.

Yet his survival is fraught. Teddy has faced humanity at its ugliest and most precarious. “The whole edifice of civilization turned out to be constructed from an unstable mix of quicksand and imagination,” he realizes after the war. Carrying memories of military carnage — scenes Atkinson renders in haunting, visceral detail — and aware that he contributed to the body count with every bomb he dropped, Teddy must figure out how to create a life in the aftermath.

While this is a less showy novel than its predecessor, Atkinson doesn’t forgo trickery altogether. She plays with expectations, shifting back and forth in time — sometimes between chapters, sometimes within a single paragraph. Occasionally, it even seems like the younger Teddy is aware of the older one to come. And while his life may seem ordinary on the surface — he and his childhood sweetheart marry, have a daughter and move to the suburbs — the echo of unpursued options haunts each of Teddy’s decisions. What could have been if fate or favour had led him in another direction at any given point?

Like Life after Life, A God in Ruins contains grand themes about life and death and the fall of mankind. But it never sags under the weight of a moral lesson. Atkinson, who is also the author of the riveting Jackson Brodie detective series, is a practised hand at page-turners and sly humour. She gives Teddy an alter ego named Augustus, the scrappy hero of a popular series of children’s books written by his aunt. Teddy resents the carefree perpetual boyhood of his fictional stand-in and, as he ages, gleefully imagines what might have become of Augustus, picturing him alternately as a whiskery, nicotine-stained codger and as a sleazy war profiteer.

Augustus is also a comment on Atkinson herself and the fiction writer’s god-like ability to animate one character and kill off another. In her previous book, she gave Ursula the unlimited opportunities afforded by multiple lives. In A God in Ruins, Teddy must find meaning among the unlimited hypotheticals provided by a single one. If given a gift as dear as life, what do you make of the brief time you have? “Afterwards — because it turned out that there was to be an afterwards for Teddy — he resolved that he would try always to be kind,” Atkinson writes in a scene set during the war. “It was the best he could do. It was all that he could do.” And perhaps, Atkinson seems to suggest, it’s all that any of us can do.