In Chris Bohjalian's new book, a 16-year-old girl loses her parents in a nuclear meltdown and she’s left to fend for herself. He chats to Chatelaine about his inspiration, female leads and advice he’d give his younger self. 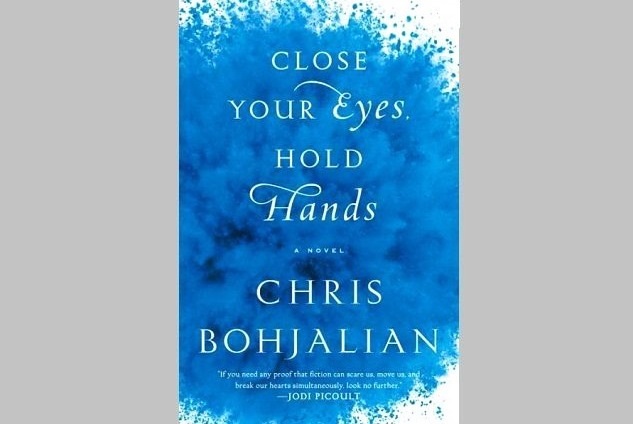 Emily’s story in Close Your Eyes, Hold Hands was very touching, but really sad at times. Was it difficult to do research on child abuse and homelessness?

Many of my books demand a lot of research. Close Your Eyes, Hold Hands weirdly required less research than others, because over the years I had already written about teens in trouble for my newspaper column [at Burlington Free Press]. I had written about young adults going through a shelter program in northern Vermont called Spectrum; some of these kids do great and make it, and some of these kids you can see in their eyes they’re so far down the rabbit hole, they’re never coming back. So I was thinking a lot about those kids when I was writing this book.

The heroine, Emily Shepard, makes a series of not so great choices – which can be hard to sympathize when compared to other teens from seemingly tougher backgrounds.

I depend on my characters to lead me through the dark of the story. I never know where my book is going. A lot of writers begin with an outline. I begin with a really vague premise. So with Close Your Eyes, Hold Hands I began with a fundamental premise: a teen in trouble. In so many ways, the deck is stacked against Emily. Her parents are alcoholics, she’s the daughter of the most hated man in America, and she can’t find her friends. So she clings to the only bits of debris she can find, and those bits of debris are floating her further out to sea.

Many of your books have a female lead. Why is that?

My daughter is 20. She read the first draft of the manuscript of Close Your Eyes, Hold Hands when she was 19 and one of the things she said to me after reading it was, ‘Dad, I think your sweet spot as a novelist is seriously messed up young women’ [Laughs]. And she’s right. If you look at my body my work I’m at my best when I’m chronicling not just young women, but young adults in trouble. Some of the books I’m known best for – Midwives, Sand Castle Girls – these are all young women with deep emotional scars. The journeys, in which my characters embark, usually demand the sort of emotional openness and emotional willingness to accept change that I think is more common to women than to men. And I think some of my novels are about my worst fears. That’s why some of my books are about young women in trouble.

Does writing about your fears help calm them?

For my book The Night Strangers, I had to research plane crashes. And I’m terrified of flying! I had to go into a dunk tank and spend a day under water in a flight simulator. But I think I did exorcise a lot of my demons. I also spent a lot of time talking to a friend, a captain at US Airways. The more you know the less terrifying it is.

There are quite a few references of the poet Emily Dickinson in this novel.

I’ve always liked Emily’s poetry. And I went to Amherst College which is the town where Emily Dickinson grew up, so practically every building on the campus was named after someone who was related to her in some way. We’ll never know why Emily Dickinson in her mid-twenties began to withdraw from society, especially given the irony that she lived next door to her brother and sister-in-law who were social butterflies. For whatever the reason, whether it was a mental health issue or whether it was a physical illness, she retreated. Like Emily [in Close Your Eyes, Hold Hands] she was a reclusive and an immensely gifted young woman.

This is your 17th book. Has your writing process changed over the years?

When you graduate from college, Random House doesn’t say to you, ‘You look like a young writer with promise. Here’s a boatload of money… go write a book.’ So you get a day job. I worked full-time at advertisement agencies, which meant that I wrote my first three novels between 5am to 7am in the morning, and Monday and Tuesday nights when I came home from work. When I left advertising to be a full-time novelist in my early thirties, I continued to write at 5am. The difference is that I didn’t have to stop at 7am to go to work. And so my writing routine hasn’t changed dramatically. I still write in the mornings.

In terms of the material, writers talk an agonizing amount of hubris about finding their voice. But the fact is that I found my voice in Northern New England. I don’t think I would have written such books as Midwives, Close Your Eyes, Hold Hands, or the The Double Bind if I had remained in New York. I love cities but the truth is that the sensibility of my books is flavoured by the fact that I live in a village of 1000 people.

What advice would you give your younger self before you had completed your first novel?

Don’t publish it! I am responsible for the single worst novel ever published bar none. There is no book ever published as bad as A Killing in the Real World. The problem with that book was that I wasn’t writing about issues that mattered to me. I was trying to write a book. The fact is some people in this world are a Donna Tartt [The Secret History] or Eleanor Catton [The Luminaries] and write a spectacular first novel. My first book was an utter train wreck. And the good news for that is that it only gets better. So the advice I would give my younger self is to take that first novel and put it in a drawer and write another book about something I really care about.

What’s the best advice you ever got?

The best advice I ever got was really mean-spirited. When I was a sophomore in college the writer in residence was teaching a course in creative writing and to determine who would be the few chosen for her course, you had to submit a short story. She would read it and tell you if you were in or not. So I submitted a short story then I was summoned to her office. She looked at me and said, ‘You must be Chris… I’m not going to even pronounce your last name. I have three words of advice for you: be a banker.’ I never forgot that. So the first decade of my writing life, I was writing with a chip on my shoulder the size of a Mini Cooper.

If you weren’t a writer, what would you be?

I would either be a Broadway Tenor, or a Major League Baseball pitcher. Those are my two fantasy professions. No talent in either though. [Laughs]