Author Aislinn Hunter on the discomfort of ambiguity

Aislinn Hunter talks to us about her haunting new novel and the impossibility of escaping the past. 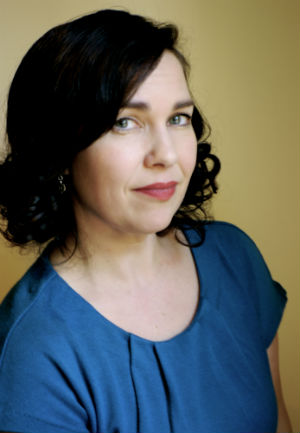 Describe The World Before Us for those who haven’t read it.
If you haven’t read the book I would say that it’s a story about coming to terms with yourself and with mistakes. It’s a book about seeing other people and accepting them for who they are and the desire we all have to be seen and recognized for ourselves.

Did the book start with the story of Jane and the lost girl, or what was the initial spark?
In the first year or two, it started with Jane having lost Lily in the woods. I’ve known people who’ve had bad things happen to them where the bad thing wasn’t directly their fault. I’ve been fascinated with what happens to us when we’re adjacent to some tragedy — somehow we’re whirlpooled into it. Then I’d been on the novel for about a year when I came across the letter I’ve replicated in the beginning of the book, which originally was from Lord Tennyson about these people [from an asylum] who had come to his door, and I literally saw the whole first chapter.

There’s a thread of loss running through the book: of people, memories, names, identities.
I’m obsessed with the past; I always have been. This book was partly born out of the fact that a real human being did go to Tennyson’s house and Tennyson did write a real physical letter, which I’ve seen. There’s this causality. The present can’t be extricated from the past — we’re still in it all the time, and that can be celebrated, too.

You were going for the gut, weren’t you, with this idea of lost girls; admit it!
It is our present, and you saw, too, when that plane went missing, this huge phenomena of people not being able to live with ambiguity. For me, one of the things I was consciously trying to do was to raise that issue of ambiguity. Sometimes we don’t know. People go missing and we don’t find out and we have to learn how to live with that and not die ourselves, in a strange way. We live in a world where we want everything to be concrete. We need the plane to be found and we need to know what happened to it.

There are dangers in holding onto and misreading or misinterpreting the past. Jane does that most spectacularly in at least a couple of ways.
The present and history, it’s a shifting trickster — what shape do you see? Again, let’s celebrate that. Let’s accept it first, then let’s find within that those things we can fix on, the moments we can see [the character] N in the clearing, and she feels seen. I’m trying to ground that ambiguity in love or affection.

I don’t know how you refer to them, but I’ve been calling them the “ghosts.” What are those characters, and why did you decide to include them?
This is a true story. I was 12 or 14, on the bus alone. I had this idea — I think I was probably a little bit lonely at that time — what if there were three ghosts and it was their job to look out after me? I remember feeling immediately comforted by this idea. I didn’t remember it again until I was years into the book.
One way you can read it, although I don’t think most people will, is that it’s a meta, where Jane then creates the whole novel and invents the ghosts. But if you don’t want that, you can definitely read that the ghosts existed, and they carry on with their amiable haunting. I think I was trying to mix the physical, the idea of what it is to be haunted by the past, but also to show this idea that we’re not in it alone.

It felt to me the ghosts were the past represented — as if the walls could speak. Souls that couldn’t find rest, looking for identification and naming.
And really what does come forward, from the world marked physically by history, right? Today I was looking at Sir Walter Scott’s will, this handwritten document with his frilly handwriting, and it raised him for me, to see his scratch near the end of life. I’m trying to show that if we’re properly attentive, the past in the form of the people who are constituents of the past actually can be raised for us if we look carefully at actual things and not things on a computer.

How do you refer to the “ghosts”?
Jack Hodgins (The Resurrection of Joseph Bourne) read an early draft and he called them the “invisible ones.”

Why are the invisible ones drawn specifically to Jane?
You can read that a few ways. The most logical way is geographic. Jane has a major life event at 15 in the woods where a number of the invisible ones might still be hanging about, so one way to think about it is that they were drawn to the trauma, to Jane in her time of need. Ditto her visit to the Whitmore, how her sneaking in woke the invisible ones up. Another reading might be to say she was the most useful person, the most fit for the task of remembering them.

One of your books, 2002’s Stay, was turned into a movie; what was that process like?
Amazing. Crazy. Surreal. They set it in the village where I wrote the book and the book itself was set. So the pub I frequented as a youngster and went back to when I researching the novel and is the setting in the novel is where they literally filmed that scene. It was freaky creepy. I felt like all those stupid, random idiocies of my life were adding up. Not because it’s a movie but because it did find its audience. I made meaning out of that rag-tag experience of growing up. It’s this idea of being of use: You tell a story and people want to hear it.

What was most surprising about the whole experience?
There were these whole snippets where dialogue I had conjured was then uttered on a movie screen, and all these people were sitting watching it. It’s like you think you’re whispering, then all of the sudden you realize there’s a megaphone in front of your face. That I could draw a string from sitting at my computer creating a line of dialogue to that moment when that dialogue was spoken again was — it must be what an adventure feels like, I think.