A girl's unusual powers comes at a great cost

Excerpt: A 13-year-old girl discovers she has magical healing powers and soon becomes known as The Miracle Child — but at what cost? 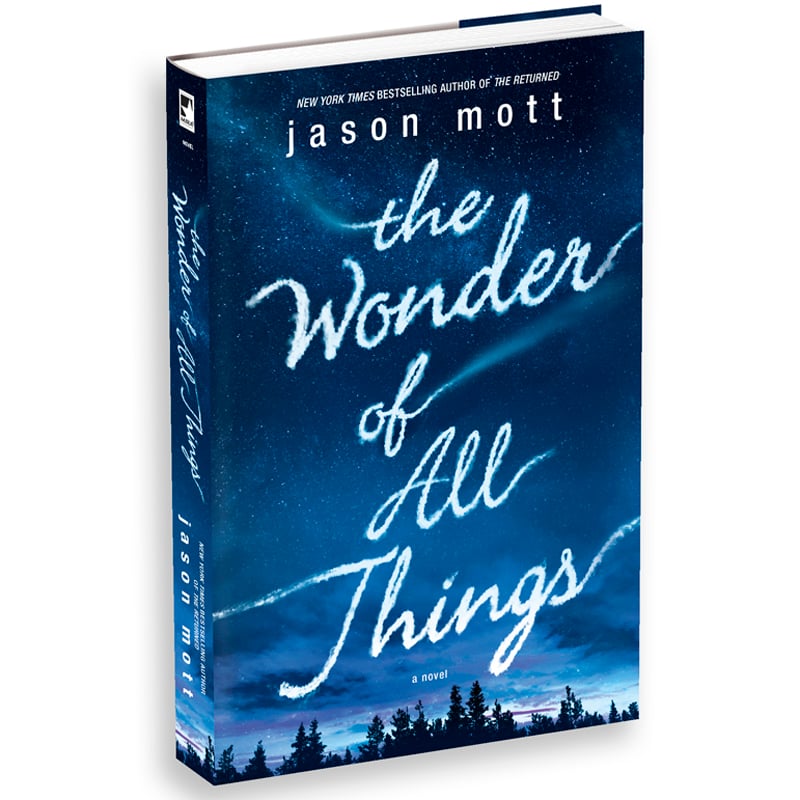 For once, death took pity.

That is what the people of Stone Temple would say in the time that came after. It was late autumn and the townspeople were preparing for an early winter. The clouds were heavy in the days before the Fall Festival and that always meant hard, cold months ahead. The festival was their way of say­ing goodbye to short sleeves and tourist season, cicadas and apple brandy on the front porch at sunset.

The highlight would be Matt Cooper, who would come and entertain them with stunts in his airplane. He was one of only two people to venture out from Stone Temple and return with the world knowing his name. He had become a pilot for a traveling air show troop and, when he could, he came to town with his red-white-and-blue-painted bi­plane to show the people of this small town that he had not forgotten them. He would land it in the open field where the town held festivals and barbecues, and the townspeople loved him not only for his stunts, but because of how he had defied the fates of so many others who left the town, were broken by the world and returned with their hats in hand.

So on the day of the festival, the Ferris wheel was set up along with the tents for games and vendors and places where sweet foods could be cooked and there was a compe­tition for blue-ribbon vegetables and a competition for the best gingerbread recipe. The entire town came out and the air was sweet and thick for miles when the day got late and Matt Cooper finally climbed into his airplane and buzzed above the earth. The townspeople took seats in makeshift bleachers and the old concrete grain silo was converted into an announcing booth. A pair of men sat atop it calling out all of Matt Cooper’s tricks and techniques. They frequently remarked on both the inherent danger and, whenever they could, on the fact that he was a native of Stone Temple who had “done good.” Folks craned their necks and held their breaths.

The plane ascended—straight up, the propeller chop­ping air, the engine buzzing, the sound of it softening as it stretched the rubber band of gravity, lifting into the heav­ens. Mountains could be stacked between man and earth just then. Finally, the crowd could hold their breaths no longer. They exhaled and, even though they knew full well that Matt Cooper could not hear them, they applauded.

It was when the tide of their applause was receding that they heard the sound of the engine sputter. The drone was broken, then restarted, then broken again. It went this way three times before only silence fell from the sky above. The silence remained. Because the plane was so far above them, it took a moment for the crowd to understand that it was falling. For so very long it seemed to be stationary—a dim, red star burning in the distance. Then the silence washed away and there came the long, dark aria of a man—who the town of Stone Temple believed was the best of them—falling to earth.

It was difficult to measure the space of time between when Matt Cooper’s plane began falling and when it finally crashed into the earth. Some would later say it was all too fast to understand. Others that they had never known hor­ror could last so long.

Then the waiting ended.

Matt Cooper was dead and there was a fire burning and the grain silo upon which the announcers had been seated lay broken, with the fragments of Matt Cooper’s airplane scat­tered around it like dropped leaves. Everything was panic.

But for whatever reason that such things sometimes come to pass, fortune was kind. Debris from the plane washed over the crowd like sea foam. It left them bloodied and, in some cases, with broken bones, but Death stayed its hand. As people took stock of one another—still trying to douse the fire, still sifting through the rubble of the grain silo—the only death anyone could count was that of Matt Cooper, who died instantly when his plane hit the silo. Even the an­nouncers, perched atop it like a bird, had somehow come out alive. The more time that came and went, the more people waited for bodies to be found—for the number of the liv­ing in this world to be lessened. But it was a day of miracles.

So it was with nervousness that the boy and girl were found buried in a pocket of concrete and steel beneath the grain silo. It was built with an infrastructure of steel pip­ing that, when felled by the plane, created small pockets. Macon Campbell, the town sheriff—a dark-skinned, over­worked man who had made it through the lion’s share of his thirties with only a handful of things he wished he’d done differently—could just make out the pair of children held within the rubble. For a moment they were only shapes in dim lighting. Then he understood that one of them was his daughter, Ava. The other, her best friend, a boy named Wash.

The fear that came over him was like swallowed lightning.

His daughter responded by moving her hand. Her body was bent at an awkward angle—fetal, pulled in on itself like a ribbon—and she was half buried by debris. But she was alive. “Thank God,” Macon said. “It’s going to be okay. I’m going to get you out.”

She looked up at him with fear and tears in her eyes. Her lip quivered and she looked around, as if trying to under­stand how all of this had happened, as if the world had bro­ken some promise she had always believed in. There was concrete and steel around her—sharp and waiting to come crashing down.

“Can you move?” Macon asked.

She answered by moving. First her hand—slowly, ten­tatively. Then, little by little, the other parts of her body. There was concrete atop her legs but, after some maneuver­ing, she freed herself.

“Don’t move too much,” Macon said. He spoke through a small, narrow breach in the rubble. He could fit his arm and part of his shoulder through it, but that was all. It would take help and time to move the rubble and safely get to the chil­dren. He called to the crowd behind him for help. “There are children here,” he shouted.

It was after she had gotten her legs free that Ava saw the boy, Wash. He was unconscious and buried up to his chest in rubble. “Wash?” she said. He did not answer and she could not tell if he was breathing. “Wash?” she called again. His face was streaked with dust and there was a small bruise on his brow. By nature, the boy was pale—something that Ava teased him about as often as she could manage—but, just now, there was something different in his pallor. He looked blanched, like a photograph left too long in the sun. It was then that she saw the steel rod jutting out of his side, and the blood seeping from the wound. “Wash!” Ava yelled, and she started crawling toward him.

“Ava, don’t move,” Macon yelled. Again he tried to fit through the small gap in the rubble. Again only his arm and shoulder fit. “Ava, be still,” he said. “This thing isn’t stable.”

She did not stop. She only kept her eyes on Wash, and continued crawling toward him. When she reached the boy she whispered his name. When he did not reply she put her hands on his face and hoped to feel something that might indicate that he was alive. Then she leaned close to his face, just above his open mouth, and tried to feel his breath. But it was difficult to tell what she was feeling. She was bruised and scratched from the fallen silo. She was frightened. Every nerve of her body seemed to be speaking to her at once. It drowned out any breathing she might have felt slide from Wash’s lips.

“Is he alive?” Macon called.

“I don’t know,” Ava replied. “He’s hurt.” She placed her hand on his neck and hoped for a pulse, but her hands were shaking and the only heartbeat she could feel was the fright­ened thundering of her own.

“How is he hurt?” Macon asked. Finally help was arriving—firemen and volunteers. But they were only in the beginning stages of solving the riddle of how to stabilize the debris and get to the children.

Ava heard her father barking orders. She heard people shouting replies. There was talk of two-by-fours, steel rods, floor jacks, cranes. It soon became simply a choir of garbled voices. For Ava, there was only the wound in Wash’s side, the sight of his blood spilling into the dust.

“I’ve got to do something,” Ava said. She gripped him beneath his shoulders.

But it was too late. She tugged at his shoulders and, as soon as she did, the debris that was covering him shifted in one great, awful lurch. The steel rod that was protruding into his side came free. His blood flowed faster.

Macon called out for more help.

Ava cried. She said, over and over again in a terrified voice, “I’m sorry…I’m sorry…” Her hands leaped nervously in front of her. She did not know where to put them. She was torn between her desire to help the boy and the truth that what she had just done made things worse.

Slowly, Ava pressed her hands over Wash’s side. She felt the pulse of his blood as it spilled over her hands. She closed her eyes and cried. She hoped. She prayed. She called out to a god that, being only thirteen, she did not know that she understood or even believed in. But, just now, at this mo­ment, she would believe in anything or anyone. She would give anything for her best friend to live, to be healed.

And then there was something akin to cold in her hands. A numbness in her palms and a feeling of needles racing up the length of her arms. The sound of her father calling for her faded away. The sound of everything receded and the darkness of her closed eyes was darker than any she had ever experienced before.

In the darkness, she saw him. Wash. He stood in the cen­ter of the darkness, the pale hue of his skin almost glowing. He was bruised and there was a cut on his brow. His clothes were covered with dirt from the fallen grain silo. The right side of his shirt was torn and there was blood pouring from the wound. But the boy did not seem to notice any of this. He only looked at Ava with a face that betrayed nothing.

Then Ava’s eyes were open. Her father was still shout­ing her name. Her body was still bruised and sore. She still kneeled beside Wash with her hands covering his side—her fingers sticky with blood. She heard ambulances. She heard yelling. She heard people crying—crying out of fear, cry­ing at the loss of Matt Cooper, crying because they could not understand how the day had turned so harsh so quickly.

Then she heard the sound of Wash’s voice.