Excerpt: Sarah Winman's When God Was a Rabbit

Sarah Winman’s captivating and laugh-out-loud funny novel, When God Was a Rabbit, traces the lives of Elly and her protective older brother, Joe, over the course of four decades. 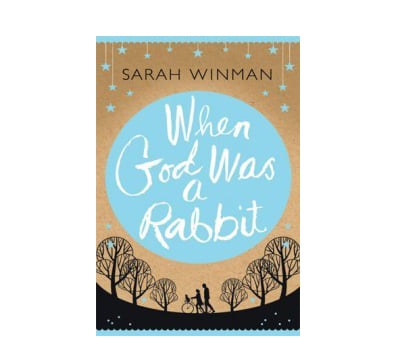 Sarah Winman’s captivating and laugh-out-loud funny novel, When God Was a Rabbit, traces the lives of Elly and her protective older brother, Joe, over the course of four decades. The two grow up surrounded by loving family and friends, including some truly eccentric souls, but soon find out that life isn’t all sunshine, happiness and playing dressup. Will love suffice to survive disaster and tragedy?

I divide my life into two parts. Not really a Before and After, more as if they are bookends, holding together flaccid years of empty musings, years of the late adolescent or the twentysomething whose coat of adulthood simply does not fit. Wandering years I waste no time in recalling.

I look at photographs from those years and my presence is there, in front of the Eiffel Tower maybe, or the Statue of Liberty, or knee-deep in sea water, waving and smiling; but these experiences, I now know, were greeted with the dull tint of disinterest that made even rainbows appear grey.

She featured not at all during this period and I realise she was the colour that was missing. She clasped the years either side of this waiting and held them up as beacons, and when she arrived in class that dull January morning it was as if she herself was the New Year; the thing that offered me the promise of beyond. But only I could see that. Others, bound by convention, found her at best laughable, and at worst someone to mock. She was of another world; different. But by then, secretly, so was I. She was my missing piece; my complement in play.

One day she turned to me and said, ‘Watch this,’ and pulled from her forearm a new fifty-pence piece. I saw the flattened edge peeking out of her skin like a staple. She didn’t produce it from the air or from her sleeve – I’d seen all that before – no, she pulled it from her actual skin and left a bloody scar. Two days later the scar was gone; the fifty pence, though, still in her pocket. Now this is the part where nobody ever believes me. The date on the coin was odd. It was nineteen years hence: it was 1995.

I cannot explain the magic trick just as I cannot explain her sudden expertise in the piano that strange morning in church. She had no tutelage in these pastimes. It was as if she could will her mind into talent and, through the willing, achieve a sudden and fleeting competency. I saw it all and marvelled. But these moments were for my eyes only: proof of some sorts, that I might believe her when the time was necessary.

I decided to enter this world just as my mother got off the bus after an unproductive shopping trip to Ilford. She’d gone to change a pair of trousers and, distracted by my shifting position, found it impossible to choose between patched denims or velvet flares, and fearful that my place of birth would be a department store, she made a staggered journey back to the safe confines of her postcode, where her waters broke just as the heavens opened. And during the seventy-yard walk back down to our house, her amniotic fluid mixed with the December rain and spiralled down the gutter until the cycle of life was momentously and, one might say, poetically complete.

I was delivered by an off-duty nurse in my parents’ bedroom on an eiderdown that had been won in a raffle, and after a swift labour of twenty-two minutes my head appeared and the nurse shouted Push! and my father shouted Push! and my mother pushed, and I slipped out effortlessly into that fabled year. The year Paris took to the streets. The year of the Tet offensive. The year Martin Luther King lost his life for a dream.

For months I lived in a quiet world of fulfilled need. Cherished and doted on. Until the day, that is, my mother’s milk dried up to make way for the flood of grief that suddenly engulfed her when she learnt her parents had died on a walking holiday in Austria.

It was in all the papers. The freak accident that took the life of twenty-seven tourists. A grainy photograph of a mangled coach lodged between two pine trees like a hammock.

There was only one survivor of the crash, the German tour guide, who had been trying on a new ski helmet at the time – the thing that had obviously saved his life – and from his hospital bed in Vienna, he looked into the television camera as another dose of morphine was administered, and said that although it was a tragic accident, they had just eaten so they died happy. Obviously the trauma of plummeting down the rocky crevasse had obliterated his memory. Or maybe a full stomach of dumplings and strudel had softened the blow; that is something we would never know. But the television camera stayed on his bruised face, hoping for a moment of sensitive lucidity for the heartbroken families back home, but it never came. My mother remained grief-stricken for the whole of my second year and well into my third. She had no stories to recall, no walking stories or funny first words, those events that give clues to the child that might become. The every- day was a blur; a foggy window she had no interest in wiping clear.

‘What’s Going On’ sang Marvin Gaye, but no one had an answer.

And yet that was the moment my brother took my hand. Took me protectively into his world.

He had skirted the periphery of my early life like an orbiting moon, held between the alternate pull of curiosity and indifference, and probably would have remained that way, had Destiny not collided with a Tyrolean coach that tragic, pivotal afternoon.

He was five years older than I was, and had blond curly hair that was as unfamiliar to our family as the brand-new car my father would one day buy. He was different from other boys his age; an exotic creature who secretly wore our mother’s lipstick at night and patterned my face with kisses that mimicked impetigo. It was his outlet against a conservative world. The quiet rebellion of a rank outsider.

I blossomed into an inquisitive and capable child; one who could read and spell by the age of four and have conversations usually reserved for eight year olds. It wasn’t precocity or genius that had become my bedfellow, simply the influence of this older brother, who was by then hooked on the verse of Noël Coward and the songs of Kander and Ebb. He presented a colourful alternative to our mapped-out lives. And every day as I awaited his return from school, my longing became taut, became physical. I never felt complete without him. In truth, I never would.

‘Does god love everyone?’ I asked my mother as I reached across a bowl of celery to take the last teacake. My father looked up from his papers. He always looked up when someone mentioned God. It was a reflex, as if he were about to be hit.
‘Of course he does,’ my mother replied, pausing in her ironing.
‘Does God love murderers?’ I continued.
‘Yes,’ she said. My father looked at her and tutted loudly.
‘Robbers?’ I asked.
‘Yes.’
‘Poo?’ I asked.
‘Poo’s not a living thing, darling,’ she said seriously. ‘But if it was, would God love it?’
‘Yes, I expect he would.’

This was not helping. God loved everything, it seemed, except me. I peeled off the last curve of chocolate, exposing the white marshmallow mound and the heart of jam.
‘Are you all right?’ asked my mother.
‘I’m not going back to Sunday school,’ I said. ‘Hallelujah!’ said my father. ‘I’m glad about that.’
‘But I thought you liked it?’ said my mother.
‘Not any more,’ I said. ‘I only really liked the singing bit.’
‘You can sing here,’ said my father, looking back down at his papers. ‘Everyone can sing here.’
‘Any reason?’ my mother asked, sensing my withholding.
‘Nope,’ I said.
‘Do you want to talk about anything?’ she asked quietly, reaching for my hand. (She had started to read a book on child psychology from America. It encouraged us to talk about our feelings. It made us want to clam up.)
‘Nope,’ I said again through a small mouth.
It had been a simple misunderstanding. All I had suggested was that Jesus Christ had been a mistake, that was all; an unplanned pregnancy.
‘Unplanned indeed!’ screamed the vicar. ‘And where did you get such blasphemous filth, you ungodly child?’
‘I don’t know,’ I said, ‘just an idea.’

‘Just an idea?’ he repeated. ‘Do you honestly think God loves those who question his Divine Plan? Well, I’ll tell you, missy, he does not,’ and his arm shot out and pointed towards my banishment. ‘Corner,’ he said, and I wandered over to the chair facing the damp, crumbling green wall.

I sat there thinking about the night my parents had crept into my room and said, ‘We want to talk to you about something. Something your brother keeps saying to you. About you being a mistake.’
‘Oh, that,’ I said.
‘Well, you weren’t a mistake,’ said my mother, ‘just unplanned. We weren’t really expecting you. To turn up, that is.’
‘Like Mr Harris?’ I said (a man who always seemed to know when we were about to sit down and eat).
‘Sort of,’ said my father.
‘Like Jesus?’
‘Exactly,’ said my mother carelessly. ‘Exactly like Jesus. It was like a miracle when you arrived; the best miracle ever.’

My father put his papers back into his battered briefcase and sat next to me.
‘You don’t have to go to Sunday school or church for God to love you,’ he said. ‘Or for anyone to love you. You know that, don’t you?’
‘Yes,’ I said, not believing him.
‘You’ll understand that more as you get older,’ he added.
But I couldn’t wait that long. I’d already resolved that if this God couldn’t love me, then it was clear I’d need to find another one that could.