I just told myself to keep going—despite the frigid temperatures, blazing sun and sudden avalanches. 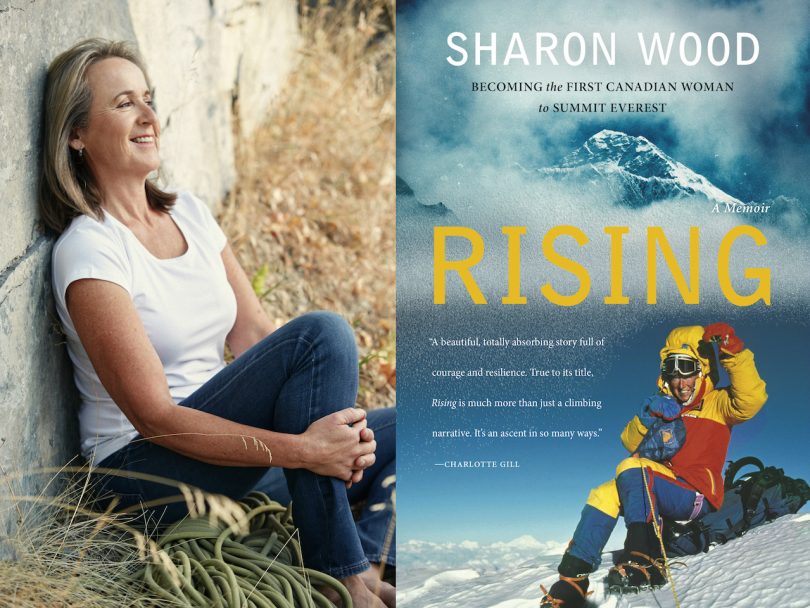 In 1986, Sharon Wood became the first Canadian woman to summit Mount Everest. In this excerpt from her new book, Rising, she talks about one particularly precarious solo climb.

I was walking by 3:30 a.m., carrying a light pack with a litre of water, some granola bars, a bag of nuts, an extra jacket, a short length of rope and a couple of ice screws and pitons. The light of my headlamp confined my world to a 10-metre radius. On each out breath, to calm my trepidation, I chanted in cadence with my step: just begin, just begin. The hard freeze overnight made the snow firm enough to walk atop. Within a few minutes my world tipped steeply upward. The beam of my headlamp now spotlighted a metre-wide circle on the face in front of me.

I felt entranced—as if I was floating. More space opened beneath my feet, demanding a precision in balance and economy of effort. My senses flared for the slightest change in feel, look and the sound of my points penetrating the ice. I had sought this place of certainty before—a state of mind that channelled adrenaline into focus. The only fear became failure, which threatened a backward slide to what I was, rather than to what I could be.

First light revealed a dim view of the crux just above me. The day before I had scoped this narrow vertical passage from below and planned to turn around here if I couldn’t find enough rock to drive a piton or ice to thread an ice screw into. But turning back was not an option. I could see veins of ice thick enough for my front points and axes, and features to stand on. After a few body lengths of delicate climbing where no more than a centimetre of my picks pricked the thin ice, I found myself above the crux.

The sky was awash in lavender and pink by the time I reached the steep and bulbous snow formations that capped the top of the face. The vertical snow bulges defied gravity and me. I attempted to burrow up through the hip-deep snow by gouging a trench and pressing my feet and body against the sidewalls, but they collapsed and it felt too insecure. I backed down and tentatively traversed below the obstacles in search of higher-density snow and an easier route to the top. When I reached the edge of the West Face, I was relieved to find a lower-angle ramp that led to the top. When I punched my right foot into the new slope, it felt denser.

All it took was one kick to disturb that layer of new snow, which clung to the ramp just beyond the angle of repose. A crack appeared, and in the time it took me to jerk back onto my left foot, it ripped across the slope. I heard a swishing sound as the snowfield disintegrated into fragments and then vanished over the edge. It was over in an instant. Was I delirious, was I seeing things? Then as if in answer, a rumbling cloud roiled up from below.
My heart pounded in my ears. The near miss sent me scuttling back across the West Face to my abandoned trench, where I bolted upward, gasping on fumes of adrenaline. To gain any traction, I had to spread my weight over the largest surface area possible. I swam with my arms and legs to propel my body upward until I reached the top. 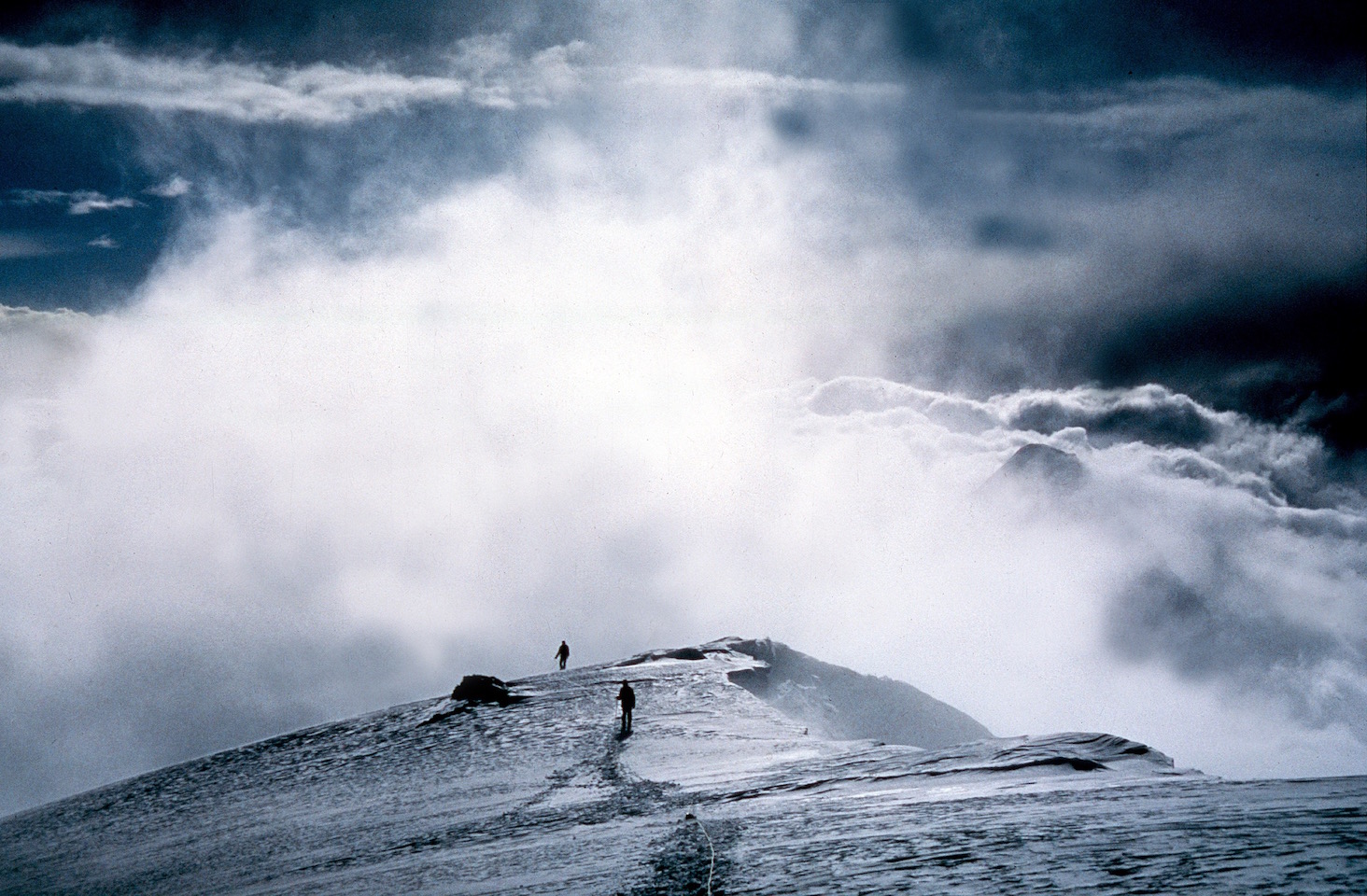 Team members are on their way down the West Ridge and nearing Camp Four on Mount Everest at 7,300 metres. Photo, courtesy of ‘Rising.’

I thumbed through the pages of my memory for everything I had learned about snow stability and stopped at the winter of 1979. I was with a group of ski industry professionals, enduring a lecture on slope configuration from snow hazards expert Chris Stethem, the best in the business. I had rolled my eyes as he stood at the front of the room, pointing at a giant image of a woman’s breast he was using to illustrate weaker and stronger terrain features. He slowly traced his pointer from the upper swell, drawing it down to the nipple and then horizontally across the curve, where he let it rest. “Right here at the breakover,” he explained, “where angle tips, is where the tension is greatest.” I was one of two women in the room, and he shot me a sly smile. Asshole.

But he was effective. Was there an avalanche hazard?

Back on the summit, I ran across to look over one side and then the other. “Sh-t, sh-t, sh-t, sh-t! What am I going to do?” I howled. “Stop it! Calm down. Sit! Eat something. Think.” And I plopped down on my pack. I felt the faint warmth of the sunrise on my back. I watched the shadow line of this peak creep down the mountainside across the valley. A light breeze came up as if caused by the movement of the earth turning toward the sun. I was a part of the ride that morning and viewing it from the top of the planet.

I looked down at our Basecamp and thought, I could still be asleep or just rousing, sipping a cup of tea Then I’d wander off somewhere just to kill time. I could be safe. Either way, killing time or killing myself, I’d be dead. Instead, I was here, inside this body vibrating to the thudding beat of my heart. I had never felt more alive.

I soon packed up, said a prayer and started descending the way I had come up—the way I’d thought I couldn’t. Axe, axe, foot, foot, slide, repeat. I made good time until I reached the ice. Unlike climbing up where my focus was right in front of my face, every step down forced me to look through my feet at the glacier far below.

Two hours later, I arrived at the crux where the next five metres dropped out of sight over the edge. My calves burned. Rivulets of sweat trickled down my face and the sides of my ribs. It was difficult to see my feet past the bulk of my jacket, and I was soaked in sweat. I shrugged one arm out of a pack strap and sleeve, slipped it back through the pack strap, and then did the same with the other arm and eased my jacket out from between my back and the pack and let it go. I envied the ease in which it floated through the air and glided to a stop on my track far below. 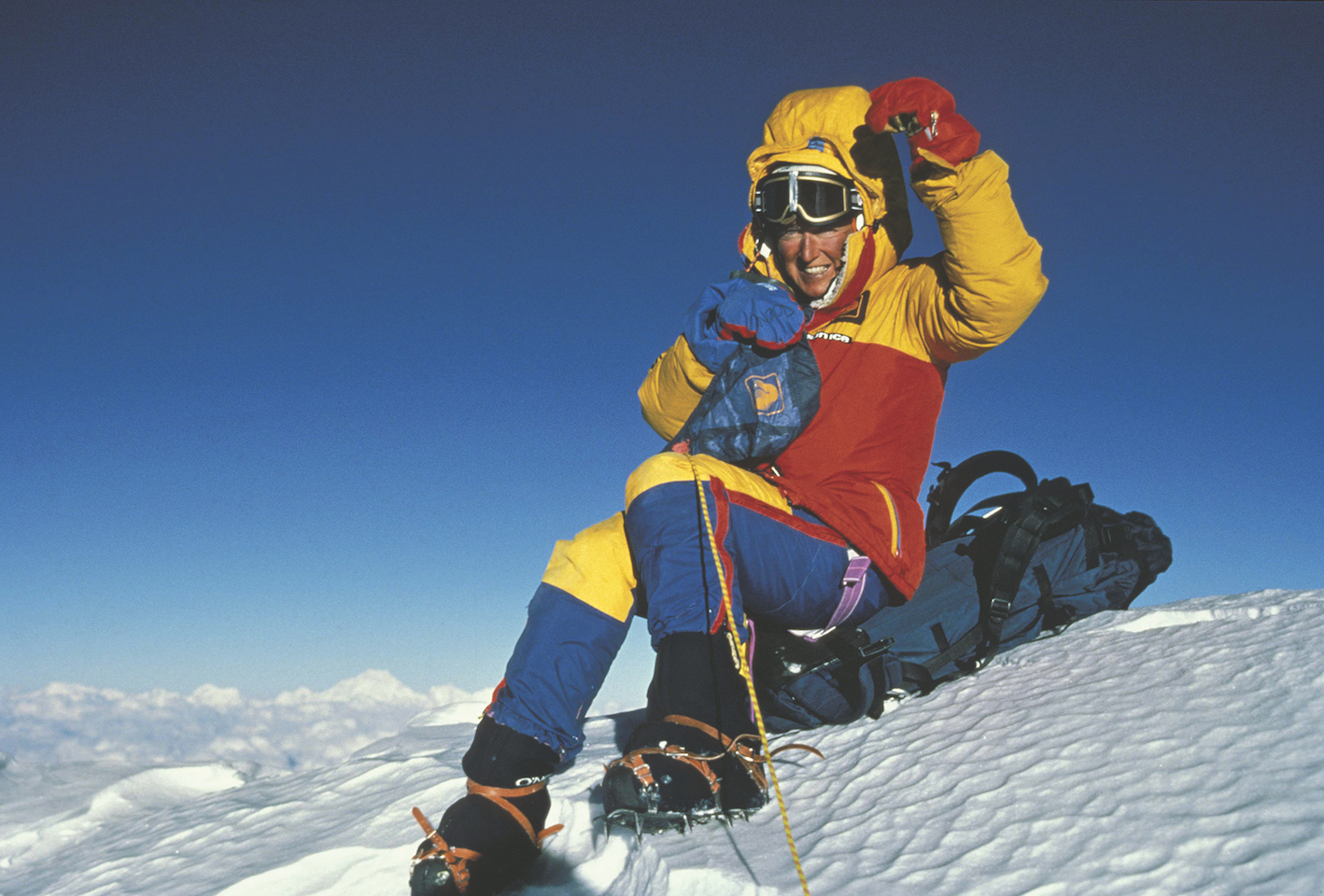 With much improved comfort and vision, I slotted my frontpoints back into the tiny holes I had made in the thin veneer of ice and fissures in the rock on my way up this section. I poured all of my will and all of my focus into each step downward and each axe placement.

I was below the crux now. My calves screamed for respite and I stopped and chopped out a ledge to get my feet sideways and my weight on my heels. I looked back up at the section I had just climbed down and shook my head in wonder. A few hours ago, I hadn’t thought it possible to reverse the moves I’d made to climb up this section. Where was the line between what I could and couldn’t do? This question would bring me back to the edge again and again.

It was noon by the time the slope’s angle eased and there was snow instead of ice beneath my feet. Knowing that a fall wouldn’t kill me now, I ran down the rest of the slope whooping and hollering, “I’m down. I’m down! Thank the gods!” I snatched up my jacket and an hour later, I stepped off the glacier onto the moraine and kissed the ground.

A few hours before, at the top of the mountain, I had said my vows and prayers: If I make it off this mountain, I will be satisfied and never need to do this again. I will appreciate everything and every day of life I have from this day on. Once I was safely down, I thought of what someone once said in a presentation I attended: “Climbing shows us that we are more than we know. We purposely climb ourselves into trouble—to a place where the only way out is through. It’s then, in the fight, that we discover more in ourselves.”

I now felt like I was more than I knew. But how long would that last before I needed to remind myself again? Not long, I discovered: I would solo the North Face of Ranrapalca two days later and then Carlos and I would do our last climb together and a new route on the Northeast Face of Huascarán Sur. I arrived home to a formal invitation to join the Everest Light team.

Sharon Wood is the owner of Adventure Dynamics, a speaking and mountain guiding business. This essay has been adapted from Rising: Becoming the First Canadian Woman to Summit Everest, A Memoir. ©2019. Published by Douglas & McIntyre. All rights reserved.