Excerpt: She stood up for girls' education and was shot by the Taliban

In this Young Readers Edition of her bestselling memoir, I Am Malala, Nobel Peace Prize nominee Malala Yousafzai shares her remarkable story. 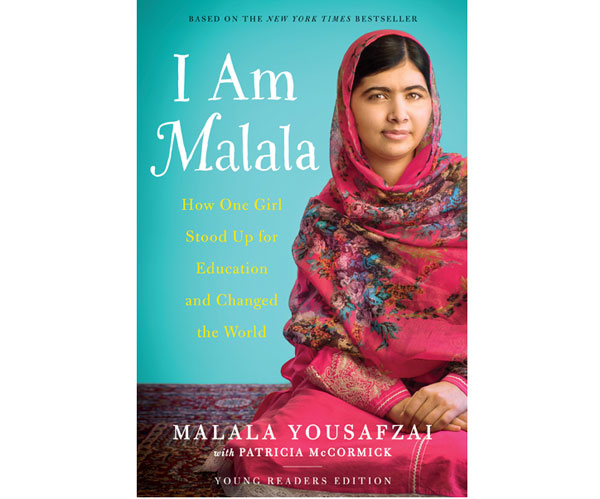 I am Malala, a girl like any other—although I do have my special talents.

I am double-jointed, and I can crack the knuckles on my fingers and my toes at will. (And I enjoy watching people squirm as I do it.) I can beat someone twice my age at arm wrestling. I like cupcakes but not candy. And I don’t think dark chocolate should be called chocolate at all. I hate eggplant and green peppers, but I love pizza. I think Bella from Twilight is too fickle, and I don’t understand why she would choose that boring Edward. As my girlfriends in Pakistan and I say, he doesn’t give her any lift.

Now, I don’t care much for makeup and jewelry, and I’m not a girly girl. But my favorite color is pink, and I do admit I used to spend a lot of time in front of the mirror playing with my hair. And when I was younger, I tried to lighten my skin with honey, rose water, and buffalo milk. (When you put milk on your face, it smells very bad.)

I say that if you check a boy’s backpack, it will always be a mess, and if you check his uniform, it will be dirty. This is not my opinion. This is just a fact. I am a Pashtun, a member of a proud tribe of people spread across Afghanistan and Pakistan. My father, Ziauddin, and my mother, Toor Pekai, are from mountain villages, but after they married, they relocated to Mingora, the largest city in the Swat Valley, which is in northwest Pakistan, where I was born. Swat was known for its beauty, and tourists came from all over to see its tall mountains, lush green hills, and crystal-clear rivers.

I’m named for the great young Pashtun heroine Malalai, who inspired her countrymen with her courage.

But I don’t believe in fighting—even though my fourteen year-old brother, Khushal, annoys me to no end. I don’t fight with him. Rather, he fights with me. And I agree with Newton: For every action, there is an equal and opposite reaction. So I guess you could say that when Khushal fights with me, I oblige him. We argue over the TV remote. Over chores. Over who’s the better student. Over who ate the last of the Cheesy Wotsits. Over whatever you can think of.

My ten-year-old brother, Atal, annoys me less. And he is quite good at chasing down the cricket ball when we kick it out of bounds. But he does make up his own rules sometimes.

When I was younger and these brothers started coming along, I had a little talk with God. God, I said, you did not check with me before sending these two. You didn’t ask how I felt. They are quite inconvenient sometimes, I told God. When I want to study, they make a terrible racket. And when I brush my teeth in the morning, they bang on the bathroom door. But I have made my peace with these brothers. At least with a pair of them, we can play a cricket match.

At home in Pakistan, the three of us ran like a pack of rabbits, in and out of the alleys around our house; we played a chasing game like tag, another game called Mango, Mango, a hopscotch game we called Chindakh (meaning “Frog”), and Thief and Police. Sometimes we rang the bell at someone else’s house, then ran away and hid. Our favorite, though, was cricket. We played cricket day and night in the alley by our house or up on our roof, which was flat. If we couldn’t afford a proper cricket ball, we made one out of an old sock stuffed with rubbish; and we drew wickets on the wall in chalk. Because Atal was the youngest, he would be sent to fetch the ball when it sailed off the roof; sometimes he grabbed the neighbors’ ball while he was at it. He’d return with a cheeky grin and a shrug. “What’s wrong?” he’d say. “They took our ball yesterday!”

But boys are, well, boys. Most of them are not as civilized as girls. And so, if I wasn’t in the mood for their boyish ways, I’d go downstairs and knock on the wall between our house and Safina’s. Two taps, that was our code. She’d tap in reply. I’d slip aside a brick, opening a hole between our houses, and we’d whisper back and forth. Sometimes we’d go over to one house or the other, where we’d watch our favorite TV show, Shaka Laka Boom Boom—about a boy with a magic pencil. Or we’d work on the little shoebox dolls we were making out of matchsticks and bits of fabric.

Safina was my playmate from the time I was about eight. She’s a couple of years younger than me, but we were very close. We sometimes copied each other, but one time I thought she had gone too far, when my favorite possession—my only toy, a pink plastic cell phone my father had given me—went missing.

That afternoon, when I went to play with Safina, she had an identical phone! She said it was hers; she said she’d bought it at the bazaar. Well, I didn’t believe her, and I was too angry to think straight. So when she wasn’t looking, I took a pair of her earrings. The next day, a necklace. I didn’t even like these trinkets, but I couldn’t stop myself.

A few days later I came home to find my mother so upset she wouldn’t look at me. She had found the stolen trinkets in my small cupboard and had returned them. “Safina stole from me first!” I cried. But my mother was unmoved. “You are older, Malala. You should have set a good example.” I went to my room, drenched in shame. But it was the long wait for my father to come home that was worse. He was my hero—brave and principled—and I was his jani. He would be so disappointed in me.

But he didn’t raise his voice or scold me. He knew I was being so hard on myself already that he had no need to reprimand me. Instead, he consoled me by telling me about the mistakes great heroes had made when they were children. Heroes like Mahatma Gandhi, the great pacifist, and Mohammad Ali Jinnah, the founder of Pakistan. He relayed a saying from a story his father used to tell him: “A child is a child when he’s a child, even if he’s a prophet.”

I thought of our Pashtunwali code, which governs how we Pashtuns live. One part of that code is badal—a tradition of revenge—where one insult must be answered by another, one death by another, and on and on it goes.

I had had my taste of exacting revenge. And it was bitter. I vowed then that I would never partake in badal.

I apologized to Safina and her parents. I hoped Safina would apologize, too, and return my phone. But she didn’t say a thing. And, as difficult as it was to keep my new vow, I didn’t mention my suspicion concerning the whereabouts of my phone.

Safina and I quickly got back to being friends, and we and all the neighborhood children were back at our running and chasing games. At that time, we lived in a part of town far from the city center. Behind our house was a grassy lot scattered with mysterious ruins—statues of lions, broken columns of an old stupa, and hundreds of enormous stones that looked like giant umbrellas—where, in the summer, we played parpartuni, a game of hide-and-seek. In the winter, we made snowmen until our mothers called us in for a cup of hot milky tea and cardamom.

For as long as I can remember, our house had been full of people: neighbors, relatives, and friends of my father’s—and a never-ending stream of cousins, male and female. They came from the mountains where my parents grew up or they came from the next town over. Even when we moved from our tiny first house and I got my “own” bedroom, it was rarely my own. There always seemed to be a cousin sleeping on the floor. That’s because one of the most important parts of the Pashtunwali code is hospitality. As a Pashtun, you always open your door to a visitor.

My mother and the women would gather on our veranda at the back of the house and cook and laugh and talk about new clothes, jewelry, and other ladies in the neighborhood, while my father and the men would sit in the men’s guest room and drink tea and talk politics.

I would often wander away from the children’s games, tiptoe through the women’s quarters, and join the men. That, it seemed to me, was where something exciting and important was happening. I didn’t know what it was, exactly, and I certainly didn’t understand the politics, but I felt a pull to the weighty world of the men. I would sit at my father’s feet and drink in the conversation. I loved to hear the men debate politics. But mostly I loved sitting among them, hypnotized by this talk of the big world beyond our valley.

Eventually I’d leave the room and linger awhile among the women. The sights and sounds in their world were different. There were gentle, confiding whispers. Tinkling laughter sometimes. Raucous, uproarious laughter sometimes. But most stunning of all: The women’s headscarves and veils were gone. Their long dark hair and pretty faces—made up with lipstick and henna—were lovely to see.

I had seen these women nearly every day of my life observing the code of purdah, where they cover themselves in public. Some, like my mother, simply draped scarves over their faces; this is called niqab. But others wore burqas, long, flowing black robes that covered the head and face, so people could not even see their eyes. Some went so far as to wear black gloves and socks so that not a bit of skin was showing. I’d seen the wives be required to walk a few paces behind their husbands. I’d seen the women be forced to lower their gaze when they encountered a man. And I’d seen the older girls who’d been our playmates disappear behind veils as soon as they became teenagers.

But to see these women chatting casually—their faces radiant with freedom—was to see a whole new world.

Excerpted from the book I AM MALALA: How One Girl Stood Up For Education and Changed the World by Malala Yousafzai with Patricia McCormick. Copyright © 2014 by Salarzai Limited. Reprinted with permission of Little, Brown and Company. All right reserved.

I Am Malala: How One Girl Stood Up for Education and Changed the World, Malala Yousafzai, $19.