In this excerpt from Grace McCleen's debut novel we get a snapshot into the world and beliefs of 10-year-old Judith McPherson, our imaginative and quirky lead character. 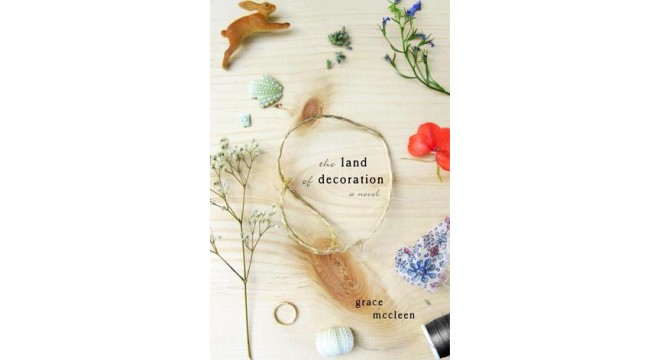 Grace McCleen’s debut novel, The Land of Decoration, has already received a lot of buzz in her native U.K., and it’s no wonder. It tells the story of the engagingly eccentric 10-year-old Judith McPherson, a little girl weighed down by her father’s sadness, lack of any friends, and the unwanted attentions of the school bully. With all that going on, it’s little wonder Judith puts all of her trust in miracles, and when she decides that she’s the reason behind an inexplicable snowstorm one night and that she has the power to change the course of events, well, all sorts of trouble results. A remarkable, if harrowing, story about faith, hope and the terrors and tribulations of growing up.

The Ground from the Air

If you look at the earth from the ground, it seems very big. Stand in a playground and bend down and put your face to the ground as if you were looking for something small, and it seems bigger still. There are miles of concrete going outward and miles of sky going upward and miles of nothing going nowhere in between. Boys playing football are giants, the ball is a planet, girls skipping are trees uprooting themselves, and with each turn of the rope the ground trembles. But if you look down from the sky, the boys and the girls and the ball and the rope seem smaller than flies.
I watch the boys and girls. I know their names but I don’t speak to them. When they notice me, I look away. I pick up a candy wrap- per next to my shoe. I will make it into flowers or a rainbow or maybe a crown. I put the wrapper inside a bag and walk on.
through the concrete, weeds are growing. At the corners of buildings they are pushing through, whittling their way to the light. I wiggle some loose and settle them with soil in a tiny tin cup that held chocolate and a tube that held sweets. they will be planted again and then they will be oaks and pampas and beeches and palms. I pick up a shoelace lying in a puddle. “This will be a hose,” I say. “Or a stream. Or a python. Or maybe a creeper.” And I am happy because in just a few hours I will be back in my room making things.
Then suddenly I am falling; the ground rushes up to meet me, and gravel is biting my knees. A boy is standing over me. He is tall. He has a thick neck. He has blue eyes and freckles and white skin and a nose like a pig. He has yellow hair and pale lashes and a cow- lick. Though I don’t think anyone would want to lick him, not even cows, who lick their own noses. Two boys are with him. One takes the bag I am holding. He tips it up and wrappers and laces and can tops blow away.
The yellow-haired boy pulls me up. He says: “What shall we do with her?”
“Hang her on the railings.”
“Pull down her pants.”
But the boy with yellow hair smiles. He says: “Have you ever seen the inside of a toilet, freak?”
A bell rings and, all across the playground, groups of children run to line up at the double doors. The yellow-haired boy says: “Shit.” To me he says: “Wait till Monday,” pushes me backward, and runs off with the others.
When they are a little way off he turns round. He has a sleepy look in his eyes, as if he is dreaming and enjoying the dream. He draws his finger across his throat, then takes off laughing.
I close my eyes and lean against the dustbins. When I open my eyes I pick the gravel out of my knees and spit on them. I hold them hard at the edges to make them stop stinging. Then I begin walking back to the school building. I am sad because I will not be able to make flowers or a stream or an oak tree after all. But what is worse is that, on Monday, Neil Lewis will put my head down the toilet, and if I die who will make me again?
The bell has stopped ringing now and the playground is empty. The sky is lowering. It looks like rain. Then from nowhere a gust of wind rises. It whips my hair and balloons my coat and carries me forward. And tumbling and flapping and fluttering around me go wrappers and papers and laces and tops.