As Gillian Flynn’s runaway-hit thriller opens, husband Nick wakes up to a world that seems perfect. His wife, Amy is downstairs is making crepes, all should be well, but somehow, some way, the picture is way off kilter. And Nick knows it. 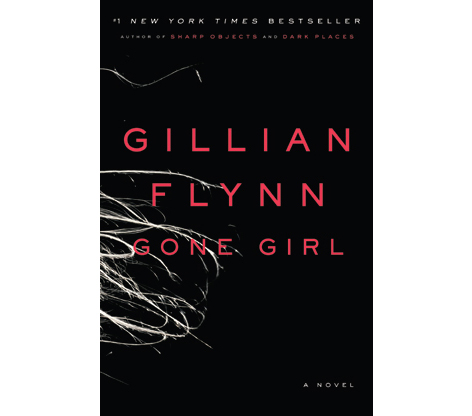 As Gillian Flynn’s runaway-hit thriller opens, husband Nick wakes up to a world that seems perfect. His wife, Amy is downstairs is making crepes, all should be well, but somehow, some way, the picture is way off kilter. And Nick knows it.

When I think of my wife, I always think of her head. The shape of it, to begin with. The very first time I saw her, it was the back of the head I saw, and there was something lovely about it, the angles of it. Like a shiny, hard corn kernel or a riverbed fossil. She had what the Victorians would call a finely shaped head. You could imagine the skull quite easily.

And what’s inside it. I think of that too: her mind. Her brain, all those coils, and her thoughts shuttling through those coils like fast, frantic centipedes. Like a child, I picture opening her skull, unspooling her brain and sifting through it, trying to catch and pin down her thoughts. What are you thinking, Amy? The question I’ve asked most often during our marriage, if not out loud, if not to the person who could answer. I suppose these questions stormcloud over every marriage: What are you thinking? How are you feeling? Who are you? What have we done to each other? What will we do?

My eyes flipped open at exactly six a.m. This was no avian fluttering of the lashes, no gentle blink toward consciousness. The awakening was mechanical. A spooky ventriloquist-dummy click of the lids: The world is black and then, showtime! 6-0-0 the clock said—in my face, first thing I saw. 6-0-0. It felt different. I rarely woke at such a rounded time. I was a man of jagged risings: 8:43, 11:51, 9:26. My life was alarmless.

At that exact moment, 6-0-0, the sun climbed over the skyline of oaks, revealing its full summer angry-god self. Its reflection flared across the river toward our house, a long, blaring finger aimed at me through our frail bedroom curtains. Accusing: You have been seen. You will be seen.

I wallowed in bed, which was our New York bed in our new house, which we still called the new house, even though we’d been back here for two years. It’s a rented house right along the Mississippi River, a house that screams Suburban Nouveau Riche, the kind of place I aspired to as a kid from my split-level, shag-carpet side of town. The kind of house that is immediately familiar: a generically grand, unchallenging, new, new, new house that my wife would—and did—detest.

“Should I remove my soul before I come inside?” Her first line upon arrival. It had been a compromise: Amy demanded we rent, not buy, in my little Missouri hometown, in her firm hope that we wouldn’t be stuck here long. But the only houses for rent were clustered in this failed development: a miniature ghost town of bank-owned, recession-busted, price-reduced mansions, a neighborhood that closed before it ever opened. It was a compromise, but Amy didn’t see it that way, not in the least. To Amy, it was a punishing whim on my part, a nasty, selfish twist of the knife. I would drag her, caveman-style, to a town she had aggressively avoided, and make her live in the kind of house she used to mock. I suppose it’s not a compromise if only one of you considers it such, but that was what our compromises tended to look like. One of us was always angry. Amy, usually.

Do not blame me for this particular grievance, Amy. The Missouri Grievance. Blame the economy, blame bad luck, blame my parents, blame your parents, blame the Internet, blame people who use the Internet. I used to be a writer. I was a writer who wrote about TV and movies and books. Back when people read things on paper, back when anyone cared about what I thought. I’d arrived in New York in the late ’90s, the last gasp of the glory days, although no one knew it then. New York was packed with writers, real writers, because there were magazines, real magazines, loads of them. This was back when the Internet was still some exotic pet kept in the corner of the publishing world—throw some kibble at it, watch it dance on its little leash, oh quite cute, it definitely won’t kill us in the night. Think about it: a time when newly graduated college kids could come to New York and get paid to write. We had no clue that we were embarking on careers that would vanish within a decade.

I had a job for eleven years and then I didn’t, it was that fast. All around the country, magazines began shuttering, succumbing to a sudden infection brought on by the busted economy. Writers (my kind of writers: aspiring novelists, ruminative thinkers, people whose brains don’t work quick enough to blog or link or tweet, basically old, stubborn blowhards) were through. We were like women’s hat makers or buggy-whip manufacturers: Our time was done. Three weeks after I got cut loose, Amy lost her job, such as it was. (Now I can feel Amy looking over my shoulder, smirking at the time I’ve spent discussing my career, my misfortune, and dismissing her experience in one sentence. That, she would tell you, is typical. Just like Nick, she would say. It was a refrain of hers: Just like Nick to . . . and whatever followed, whatever was just like me, was bad.) Two jobless grown-ups, we spent weeks wandering around our Brooklyn brownstone in socks and pajamas, ignoring the future, strewing unopened mail across tables and sofas, eating ice cream at ten a.m. and taking thick afternoon naps.

Then one day the phone rang. My twin sister was on the other end. Margo had moved back home after her own New York layoff a year before—the girl is one step ahead of me in everything, even shitty luck. Margo, calling from good ole North Carthage, Missouri, from the house where we grew up, and as I listened to her voice, I saw her at age ten, with a dark cap of hair and overall shorts, sitting on our grandparents’ back dock, her body slouched over like an old pillow, her skinny legs dangling in the water, watching the river flow over fish-white feet, so intently, utterly self-possessed even as a child.

Go’s voice was warm and crinkly even as she gave this cold news: Our indomitable mother was dying. Our dad was nearly gone—his (nasty) mind, his (miserable) heart, both murky as he meandered toward the great gray beyond. But it looked like our mother would beat him there. About six months, maybe a year, she had. I could tell that Go had gone to meet with the doctor by herself, taken her studious notes in her slovenly handwriting, and she was teary as she tried to decipher what she’d written. Dates and doses.

“Well, fuck, I have no idea what this says, is it a nine? Does that even make sense?” she said, and I interrupted. Here was a task, a purpose, held out on my sister’s palm like a plum. I almost cried with relief.

“I’ll come back, Go. We’ll move back home. You shouldn’t have to do this all by yourself.”

She didn’t believe me. I could hear her breathing on the other end.

A long exhale. “What about Amy?”

That is what I didn’t take long enough to consider. I simply assumed I would bundle up my New York wife with her New York interests, her New York pride, and remove her from her New York parents—leave the frantic, thrilling futureland of Manhattan behind—and transplant her to a little town on the river in Missouri, and all would be fine.

I did not yet understand how foolish, how optimistic, how, yes, just like Nick I was for thinking this. The misery it would lead to.

“Amy will be fine. Amy . . .” Here was where I should have said, “Amy loves Mom.” But I couldn’t tell Go that Amy loved our mother, because after all that time, Amy still barely knew our mother. Their few meetings had left them both baffled. Amy would dissect the conversations for days after—“And what did she mean by . . .”—as if my mother were some ancient peasant tribeswoman arriving from the tundra with an armful of raw yak meat and some buttons for bartering, trying to get something from Amy that wasn’t on offer.

Amy didn’t care to know my family, didn’t want to know my birthplace, and yet for some reason, I thought moving home would be a good idea.

My morning breath warmed the pillow, and I changed the subject in my mind. Today was not a day for second-guessing or regret, it was a day for doing. Downstairs, I could hear the return of a long-lost sound: Amy making breakfast. Banging wooden cupboards (rump-thump!), rattling containers of tin and glass (ding-ring!), shuffling and sorting a collection of metal pots and iron pans (ruzz-shuzz!). A culinary orchestra tuning up, clattering vigorously toward the finale, a cake pan drumrolling along the floor, hitting the wall with a cymballic crash. Something impressive was being created, probably a crepe, because crepes are special, and today Amy would want to cook something special.

It was our five-year anniversary.

I walked barefoot to the edge of the steps and stood listening, working my toes into the plush wall-to-wall carpet Amy detested on principle, as I tried to decide whether I was ready to join my wife. Amy was in the kitchen, oblivious to my hesitation. She was humming something melancholy and familiar. I strained to make it out—a folk song? a lullabye?—and then realized it was the theme to M*A*S*H. Suicide is painless. I went downstairs.

I hovered in the doorway, watching my wife. Her yellow-butter hair was pulled up, the hank of ponytail swinging cheerful as a jumprope, and she was sucking distractedly on a burnt fingertip, humming around it. She hummed to herself because she was an unrivaled botcher of lyrics. When we were first dating, a Genesis song came on the radio: “She seems to have an invisible touch, yeah.” And Amy crooned instead, “She takes my hat and puts it on the top shelf.” When I asked her why she’d ever think her lyrics were remotely, possibly, vaguely right, she told me she always thought the woman in the song truly loved the man because she put his hat on the top shelf. I knew I liked her then, really liked her, this girl with an explanation for everything.

There’s something disturbing about recalling a warm memory and feeling utterly cold.

Amy peered at the crepe sizzling in the pan and licked something off her wrist. She looked triumphant, wifely. If I took her in my arms, she would smell like berries and powdered sugar.

When she spied me lurking there in grubby boxers, my hair in full Heat Miser spike, she leaned against the kitchen counter and said, “Well, hello, handsome.”

Bile and dread inched up my throat. I thought to myself: Okay, go.