In this passage from The Virgin Cure by Ami McKay, our heroine Moth wakes one night to find that a mother’s love is anything but a sanctuary. 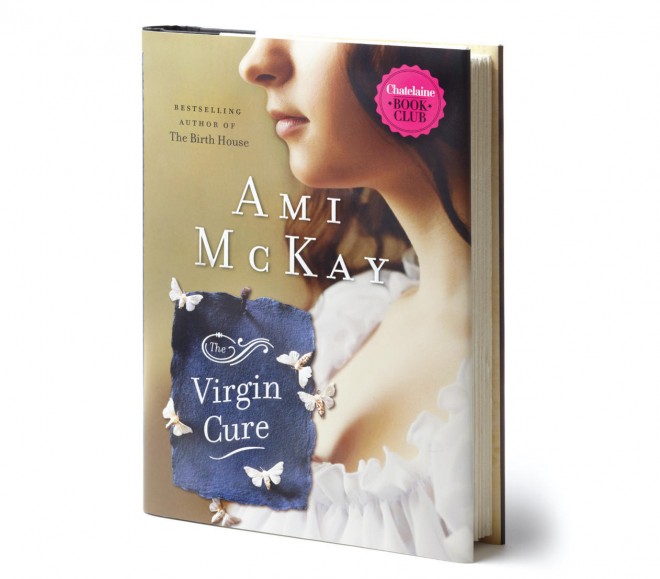 In this passage from Ami McKay’s new novel, The Virgin Cure, which is set in 19th-century New York, our poverty-stricken heroine Moth is awoken one night only to find that a mother’s love is anything but a sanctuary.

She came to me, pushing at my shoulder while I was asleep. Ignoring her, I curled myself into a ball on my half of our sagging straw mattress.

Her voice wasn’t right. It was thin and tight in the wrong places and all I could think was that there must be a fire.

Mama loved watching buildings go up in flames. We had a collection of sooty bric-a-brac on the front windowsill to prove it. She’d pulled things from the rubble of every fire she’d ever chased. A gentleman’s shaving mug cracked in two; a blackened doorstop shaped like a dog; countless bits of melted glass—brown, green, blue; even a tiny porcelain chamber bowl meant for a dollhouse. It had words painted around the rim: Piss or get off the pot. Mama had a scar on the palm of her right hand from where the thing had burned her.

“You go on without me,” I mumbled, my tongue feeling thick with sleep. “I don’t need to see it.”

“Get up,” she insisted, twisting the fine hairs at the back of my neck until the pain of it made me sit up and open my eyes.

The hoops she always wore in her ears were winking at me, shimmering in the light of a candle she’d just lit. Reaching to the post at the end of the bed, she grabbed my dress and tossed it at me. Then she began taking my things out of our dresser drawers and throwing them on the bed: a pair of stockings with the toes worn through, my old petticoat, the ragdoll I carried around as a child and called Miss Sweet. The doll’s arm came off in Mama’s hand and the rest of Miss Sweet fell to the floor. She picked up the thin, limp body and looked at me.

“You still want her?” she asked.

“Yes,” I mumbled, as I pulled my dress on over my head.

Mama took the doll and its arm and pushed them into an empty pillowcase. Then she held the case out to me and looked to the pile on the bed. “Put the rest of your things in this.”

“What’s happening?” I asked, as she reached around my middle to tie the sash of my dress. “Is there a fire? Are we in trouble?”

“There’s no fire and there’s nothing for you to worry about,” she said, working my hair into a loose braid down my back. I heard the slither of a length of ribbon being made into a bow, felt the ache of it being pulled tight. She turned me so I was facing her and brushed a stray hair away from my brow. “You’re going on a little trip, that’s all. I’ve found you an excellent position, but you have to leave tonight.” Putting the lumpy pillowcase in my hands, she took me by the arm and led me to the front room.

There was a woman sitting next to Mama’s fortune-telling table, resting in our velvet rocker, one of the few things of value that Mama hadn’t sold. She was wearing a fine, dark dress with a long matching cape that pooled around her in her seat. Her face was soft looking, her eyes moist and shining at the edges. The wide bow of her hat was tied under her chin, and the flesh of her neck folded against it as if she were made of butter and cream. Looking at me, she picked up the front of her skirts and shifted in her seat. I could see her shoes peeking out from her petticoats—black leather boots with scalloped trim around the buttons that reached far above her ankles.

“Say hello to Mrs. Wentworth,” Mama said, as she pushed me towards the woman.

Still staring at her boots, I stumbled, nearly falling into the lady’s lap.

Mama smiled at her apologetically. “It takes her a while to warm up to strangers. You understand.”

Speaking up before I could, Mama said, “Miss Fenwick will do.” Then she looked to me and nodded as if she’d just named a stray dog.

Fenwick wasn’t my father’s name or even my mother’s. It was the name on the label that was peeling off an old biscuit tin Mama kept with the rest of her fire souvenirs. The box had been painted to look like it was made of gold, and from a distance it seemed as if it were meant to hold some great treasure. Up close, the thing was a disappointment, with rusty holes eating away its underside, and a dented lid that wouldn’t stay shut. Fenwick Brothers Shortbread, a cut above the rest.

Mrs. Wentworth took my hand in hers. “A pleasure to meet you, Miss Fenwick,” she said. Looking me over with her large, watery eyes she added, “I’m sure we’ll be very happy together.”

Mama stared at me not with sadness, but with pleading. She was thinner than I’d ever allowed myself to notice, looking more like a child than a woman. I wanted to believe she knew what was best for me. I wanted to believe she was like every other mother and that she loved me more than I loved her. I hoped if I followed her wishes, I would finally make her happy.

There were no tears at our goodbye. I knew Mama wouldn’t stand for it. Tears offended her more than just about any other wrong a person could do. “That’s enough,” she’d say, scowling and stomping her heel on the floor whenever my eyes showed the slightest sign of being wet. “American girls never whimper.”

After Mrs. Wentworth led me out of the house, I heard Mama shut the door behind us, turning her key in the lock.

“Come now, Miss Fenwick,” Mrs. Wentworth said, taking my hand and urging me down the steps to the street.

Looking back, I saw Mama’s arm reaching to close the curtains on the front window, her figure changing to a silhouette. Led by the tired bend of her neck, she moved to turn the lamp down, making the room go dark.

Thirteen, I’d thought, would be my time to go.