Everything Was Good-Bye is our next Book Club pick!

Gurjinder Basran's debut novel, Everything Was Good-Bye, is Chatelaine's next book club pick. Here's our review to get things started. 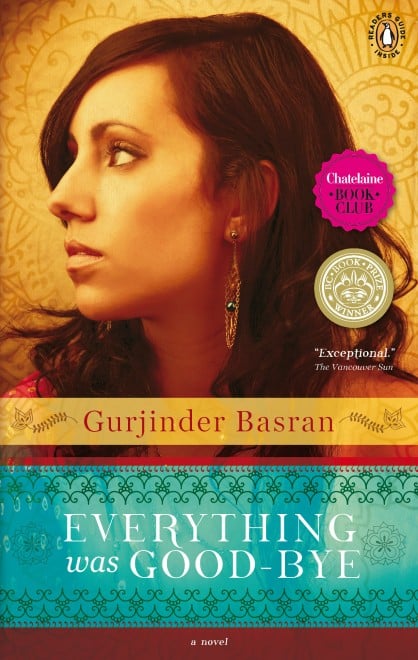 The hook: “What does want have to do with it?” That’s the central question in this story about a Punjabi teen growing up in British Columbia and coming to terms with cultural demands. Is it possible to balance personal happiness with family honour, and the culture you were born into with the one you’re growing up in?

The plot:  Seventeen-year-old Meena feels like an outcast — at school, in the community, even at times among her own family — until she meets another misfit, Liam, who doesn’t care that she comes from a strict Indian family. With Liam, Meena can forget about everything that is expected of her — obedience, a respected career (one that doesn’t have anything to do with her passion, writing) and an arranged marriage with an Indian — or, if not forget, at least pretend that there are no expectations. Upon graduating, Liam decides to leave Vancouver and asks Meena to join him, but Meena realizes she just can’t pull away from her family obligations. With tempered reluctance, Meena accepts what is expected of her. But when Meena’s and Liam’s paths cross again years later, she must choose between the life she has and the one she dreamed of, even if it means letting go of family and turning her back on history — and even if there might be devastating consequences.

The inspiration: The idea for Meena’s story was planted when Gurjinder Basran started keeping a journal about her own childhood and shared the memories with her sisters. “I took these vignettes as roots for the fiction,” she says. Like her heroine, Basran is the youngest of six, with no father in the picture. “The benefit of being the youngest is that you’re constantly observing,” she says. Because the story deals with some heavy issues — a woman’s place in the world, domestic violence — Basran did have some concerns about how the book would be received by her Punjabi community, but she says she’s been inspired by the feedback: “Women are happy to be represented, to have an opportunity to discuss these issues. It’s created a space for dialogue.”

Talking points: Family expectations, obligations at work, responsibilities to honour the past and prepare for the future: How can a woman establish her own identity and be happy with her place in the world? —

Everything Was Good-bye, Gurjinder Basran, $18