Discussion: The end of the road in Part 3 of Hillary Jordan’s When She Woke

Your readers are riveted by the final section of Hillary Jordan’s When She Woke (page 221 to end). Hannah's journey to safety and salvation is almost over, but first she takes a little detour to meet up with the person who was the father of her misfortune. 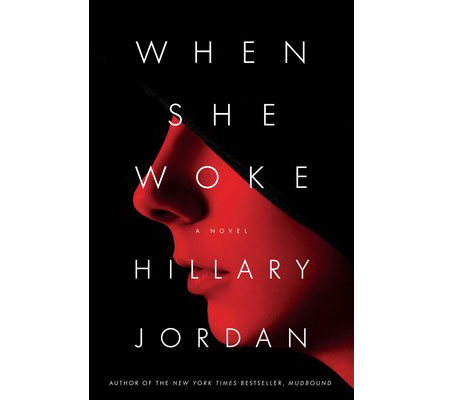 Alex and I  are riveted by the final section of Hillary Jordan’s When She Woke (page 221 to end). Hannah, our heroine, is on the final legs of her journey toward safety and salvation but first decides to take a little detour to meet up with the person who was the father of her misfortune. Will she make it to her final destination? What have been the lessons she’s learned along the way?

Alex:  So, When She Woke has come to an end. Those pages flew by. Hillary Jordan is such a talented writer. She managed to get all that detail of the journey into such a short space, which allowed her to really paint some scenes with such poignancy that I couldn’t help but feel like I was watching a movie almost. Like when Hannah is tiptoeing around Aidan’s house — the coat hooks, the chintz.

Laurie:  It’s true! So much packed in, so many thoughts and yet nothing gets bogged down by all the weighty concepts. And it is very visual. I always imagine things in my head as I read, and with this book it was so easy. Like Hannah going to the house in the snow. The snow was making everything clean and bright as she headed north — a clean palette, a new world.

Alex:  Exactly. And stumbling across religion again. It seemed so natural.

Laurie:  Yes! And a more accepting religion. One that could live with her and vice versa.

Alex:  She had her eyes opened and questioned her own stereotypes just as others judge her.

Laurie:  But it’s a world she knows she couldn’t live in: that perfect little picket fence town. She’s turning her back on her past, those old beliefs, and old value systems.

Alex:  I know! I found her saying goodbye to her past was what made her decisions about Aidan so believable. And I liked the snow imagery and how the elements didn’t distinguish between colour even.

Laurie:  Aidan’s in the past, too. And now she knows it and accepts it.

Alex:  Haha — a very North American one!! And at the very end, when she’s tempted to fall into the snow and give up. I was right on the edge of my seat — I could really imagine how possible it would be to feel that way after everything she’d been through.

Laurie:  Yes. Surrender to her future and what is to be. But with power.

Alex:  That hand reaching out and lifting her up when she least expects it, and then she’s able to reflect on everything from a new perspective.

Laurie:  Another saving hand. There are good people in the world. Were you worried when she was in the house that she was going to be caught somehow? I was on the edge of my seat at that point.

Alex:  I felt like she would be caught by Alyssa. I was more afraid of her at that stage than the Novembrists.

Laurie:  Yes! Not Aidan giving her away, but that someone would find out…I’m so suspicious.

Alex:  I know! And then he went and admitted it all anyway. It’s reminiscent of life.

Laurie:  So what about Aidan’s actions?

Alex:  It’s always possible to look back and think, well it was all for nothing. But you have to be able to think about what you’ve learned and why your path went the way it did.

Laurie:  They seemed realistic to me. But I think what he did was purposeful in many ways — to prevent what happened to her — which shocked him I think — from happening to others.

Alex:  He’s finally been able to redeem himself — no pun intended — and his vid messages laid the foundation for that to be believable. He’d been thinking about her — I liked that element of the plot. He is human. And that highlights the problem with extreme religion — that we’re all only human.

Laurie:  Yes, he had and fully intended to sacrifice everything to be with her. It’s all or nothing. No grey. No compromise. No compassion.

Alex:  And Hannah was telling him he has too much to do to support others to give up everything for her. And the bottom line is if you’re not true to yourself you’re no good to anyone.

Laurie:  Do you think there will be a groundswell of support for him and what he’s saying?

Alex:  He’s an unlikely hero isn’t he? I think it will cause huge ripples.

Laurie:  But he’s charismatic and that counts for something. I think there will be many who turn away from him, but many who stand by him. And that will make a difference.

Alex:  And it will depend if people love him or his ideas — as in the bible’s ideas.

Laurie:  What about Simone? Crazy dangerous Simone, who you thought was a total whackjob?

Laurie:  She was a surprise. Just goes to show you: you can’t judge people! Did it feel real to you in terms of Hannah though?

Alex:  To me the sex really represented the idea of human compassion and human nature. And, yes re Hannah. I think her whole life she had been forced to shut those thoughts down.

Laurie:  And it felt like she was open to the possibilities of life and the exploration of it. And human kindness. And actually really seeing people for who they are, not prejudging them.

Alex:  I don’t think she’s necessarily a lesbian but is ready to take life’s experiences and connect with people. It was funny that she was able to say all that derogatory stuff about lesbians having just slept with Simone…

Laurie:  But she’s definitely not the same person at the end of the book that she was at the beginning. Waking up in more ways than one.

Alex:  Yes, indeed. It’s going to take a while for her to shed some of those old ideas. Also by the end I didn’t want her and Aidan to reunite, because I could understand how much that would put her back on that path.

Laurie:  It’s interesting that when she pictures her new life, it’s her alone, with Paul and Kayla.

Alex:  I was JUST thinking that. It’s a really good lesson for anyone who is newly single. You have to be able to picture your life and your happiness for yourself.

Laurie:  All our books end with the women alone!!!!

Alex:  It’s so rewarding if you do it that way rather than the rebound way that Kayla goes about things. But it’s much harder. It’s easier to be distracted from putting the work in if you’re with someone.

Laurie:  Hopefully Kayla has learned something, too.

Alex:  Yeah, but I think she has, but she’s also not as strong as our heroine.

Laurie:  Some might say that despite the pacing, etc. Jordan was heavy handed with the issues (I’m thinking a Washington Post review here). I think we’d disagree, wouldn’t you?

Alex:  I felt that the religious theme could be seen to be overdone and she did go over the concepts a lot but I assumed that was to make it more accessible to people and also that I was just not as interested in those parts because I’m not very religious.

Laurie:  My only quibble would be that I wasn’t quite clear how widespread or ubiquitous the religious element was.

Alex:  Yeah, it was hard to gauge if Hannah’s family was the minority but the persecution of chromes seemed so widespread I assumed a large part of the population felt the same way her folks did. I found even I took on some of their prejudice — thinking “Kayla must have been REALLY pretty for Vincent to like her that much.”

Laurie:  Really? I didn’t. Red schmed… But given Hannah’s questioning nature, it seemed to me that if a more permissive society had existed somewhere, she, by that age, would have been aware of it and would have broken more free of the bounds of her family and religion. But she hadn’t and that didn’t quite make sense to me. She just questioned things and that’s it?

Alex:  That could be a testament though to how isolated she had been. But she is the narrator, so it’s possible things were actually worse than she described — she just thought it normal. To begin with she was talking about hiding out and making dresses and by the end she referred to it as being locked in the attic. That was a nice way to pick up that theme.

Laurie:  I liked how she made the crack about the dinosaurs on the ark again re the reverend in the northern church. And there a sort of a Sleeping Beauty fairytale feel to the end, but importantly minus a prince. She wakes up in her pretty house and all is well.

Alex:  She’s her own prince!

Laurie:  And she will create her own destiny.

Alex:  She already is.

Laurie:  True! Well, next week, we’ll be talking about another girl’s destiny: Moth in Ami McKay’s The Virgin Cure, the follow-up to her hit debut novel, The Birth House.

Alex:  I look forward to starting it!

Laurie:  Till next week!