In this, the second and last part of Mr g by Alan Lightman (page 112 to end), Alex, Lora and I ponder such things as good vs. evil, faith, the meaning of life — and the allure of sparkly dresses. 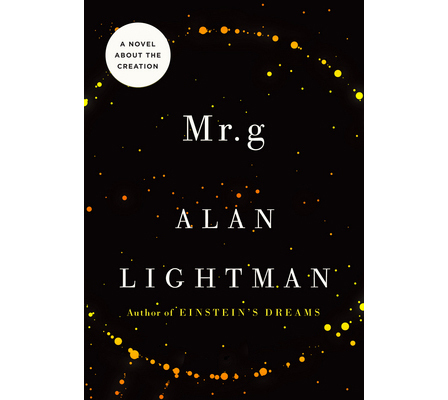 In this, the second and last part of Mr g by Alan Lightman (page 112 to end), Alex, Lora and I ponder such things as good vs. evil, faith, the meaning of life — and the allure of sparkly dresses.

Laurie:  I was impressed by how stimulating and yet easy to read this book is.

Alex:  Immensely thought-provoking and satisfying. I found myself thinking of a number of people I need to give this to. It was like being at a dinner party, absorbed in conversation for four hours.

Lora:  Me, too, Alex! I feel like everyone should read this book. It changed my outlook.

Laurie:  In what way, exactly, Lora?

Lora:  In the first half, I was slightly overwhelmed. I was letting myself get bogged down with all of the science and math. But I soon realized that all of that isn’t what matters. What matters is the story of existence. It made me realize I’m one of billions and billions of living beings on this earth and how self-absorbed we all are.

Alex:  Yeah, it’s kind of a metaphor for life isn’t it? Such big ideas but discussed in a simple way, once you get into his flow. It really began to feel like a story, a story we’re all a part of.

Laurie:  Self-absorbed in a good, bad or just necessary way?

Alex:  In a wonderful way — “Stop getting caught up in the details and see the bigger picture.”

Alex:  it’s wonderfully reassuring to be deliberately confused by an author and then realize, “Ohhhhhhhh.” I am not supposed to care so much about that crap. It’s very clever.

Laurie:  Did it ever make you feel, What’s the point? (Which is Belhor’s stance…)

Alex:  Not at all. It made me think, I need to enjoy myself more!! And I need to be happy about who I am and nurture my relationships because they are what’s important to me.

Laurie:  Me, neither, actually. It made me feel how wonderful all our striving and hoping and longing and trying to understand is in the face of such inexplicability.

Lora:  Same here. You would think it would bring up those questions of “What does it all mean?” but Lightman makes the point that nothing, really, is absolute.

Alex:  I love the concept of people finding their own meaning from life. That’s something I’ve become so aware of recently and that different people derive meaning from different things.

Alex:  It was lovely for me to see that from that omniscient viewpoint. And some people don’t figure it out until a lot later. That’s what’s really sad: it’s hard to be in touch with your “soul” all the time with all the noise.

Laurie:  Did it worry you, having said that now, that Lightman is an atheist?

Lora:  I think the fact that he’s an atheist is part of what makes this book so brilliant, actually.

Alex:  I love the discussion of religion and how they talk about how we’re supposed to only know so much.

Laurie:  What about it specifically?

Alex:  Some of it must remain a mystery. I liked imagining that discussion — that there’s a reason we don’t know the answers for sure. So intriguing.

Laurie:  Do you think mystery is essential to faith?

Alex:  Exactly: faith wouldn’t be faith without some unknowns, would it? It would be called “certainty” or something else instead, haha!

Lora:  I found the idea that Mr g didn’t personally recognize every single living being to be rather humbling.

Alex:  And how they decided on a taste of the afterlife. The idea of reincarnation almost. I thought that was where they were going but they didn’t quite spell it out, but I guess they did by breaking it down to atoms, etc. That was awesome.

Laurie:  All is reborn again in essence, if not consciously, in other place and other bodies.

Lora:  Toward the end of the book, I was beginning to worry about how it would all end. I was afraid it would be abrupt. But that was such a beautiful way to bring it all together.

Laurie:  The eternal cycle of life. And even when Aalam is devoid of life, there is the next universe to come along. It was incredibly beautiful.

Alex:  And I didn’t feel sad for the universe; I felt the same way I feel about life: that it’s good and it’s bad and you enjoy it while you can.

Lora:  I actually felt really good when I put the book down. Like I had a renewed lust for life.

Alex:  I think it gives you realistic expectations and makes you feel a little braver about facing things.

Laurie:  It was the natural course of things. That’s why I think being on the edge of a vast ocean or a vast plain is good — same feeling of smallness to put things in perspective.

Lora:  I hope readers embrace this book and don’t become weighed down in the small details. Because in the end, it reminds you of how short life is and how much we tend to take it for granted.

Alex:  And that in itself is a real gift.

Laurie:  And it’s so beautifully written, accessible and funny — just skip the carbon bits if you feel you need to! I think it’s a wonderful gift for people to read and share and discuss.

Lora:  I would send a copy to everyone if I could.

Laurie:  I’m so glad I’ve made you Lightman fans! You must now read Einstein’s Dreams (also small!). What about the opera scene? We haven’t discussed that.

Lora:  When you said funny, I immediately thought of that chapter, Laurie!

Alex:  It was hilarious.

Laurie:  I was saying to Lora earlier, that it’s the sort of thing you think of saying out loud, but never would: “The mezzo-soprano is crap!” Which then also makes you think: I am the devil! I am behaving devilishly!

Alex:  Yes: “I don’t like her, I will just start a fire and steal all your monies!” Way to not get involved, Belhor!

Laurie:  But it was interesting to note that Belhor said they only changed what was already in play, in existence and that changed nothing in effect.

Lora:  Yes, that they simply gave the universe a “nudge” to move things along. And their attire was so perfect, too: Only a real jerk would wear pajamas to the opera.

Alex:  Such double standards: “Don’t meddle, will you Mr g?” Except excuse me while I pull some serious strings. That’s the devil for you…

Laurie:  Yes, and as far as Belhor is concerned, all the beings are of importance only so far as they amuse him. Totally self-referential.

Lora:  I loved that whole discussion of necessary opposites. That in order for there to be good in the universe, there also has to be evil.

Alex:  That they are dependent on each other to be really appreciated.

Laurie:  Hence Belhor’s existence. But only after the creation of the universe. Why?

Alex:  That’s when the ego came into being, I think.

Lora:  I guess it makes sense that if the universe was created out of goodness, evil would have to be created at the same time — for there to be balance.

Laurie:  But if goodness already existed in the form of Mr g, what was the opposing balance before?

Alex:  I think he created evil when he created the universe. Because that’s when he began to show his own vanity, and the evil just came along as a  consequence. All those things were dormant.

Laurie:  I guess no need for balance in nothingness, in the Void before the universe then?

Alex:  Exactly. Then he gave way to curiosity and all hell broke loose.

Laurie:  And off on a bit of a tangent: what about the seriously disturbing Hand Stunting chapter???

Lora:  It made me think of the world we live in now and some of the horrific things human beings do to each other.

Alex:  Very thought provoking when Mr g pictures the other universe doing it to men, and then introducing the two cultures.

Laurie:  Once again, Lightman excites zee little grey cells! (OK, you’d have to be an Agatha Christie Poirot fan to get that.) Is there anything you wish he had done differently/not done?

Lora:  I don’t think so. Although at first, my mind struggled with the idea of the Void. How can nothing be something? Like the scraps that Penelope collects. But then Lightman makes reference to that — how it would be impossible for humans made of matter to imagine nothingness.

Laurie:  Yes. And that we can’t imagine how everything all began — we can go back to the beginning, but not before that.

Lora:  So I just accepted it — like I had his permission to let my imagination construct the setting.

Laurie:  Did either of you find Penelope a tad stereotypical? Her name means “Faithful wife” (although, having said that, all the names in the book are entirely representative. eg, Belhor: Satan; Aalam: universe/world).

Alex:  They’re all so well thought out. I kind of liked Penelope.

Laurie:  I just found her a bit whingy. But I suppose that’s what made her amusing. And maybe, as per the names, all the characters were stereotypes, so Penelope was consistent with that.

Alex:  I thought that provided light relief and balance — you have to remember to laugh from time to time and with all this weighty stuff, get on with things and comb your hair.

Lora:  She had sass. I was a bit irritated at the birthday party, though, and how she became greedy and wanted the sparkly dress. But that was the point: the universe changed them.

Laurie:  I thought the birthday bit was funny, but, yes, the universe was changing them all and that was made clear:  there could be no creation without change. Although Penelope had always been collecting things, even bits of nothingness, as you mentioned, Lora. It’s her innate character, I guess.

Alex:  What a great book!

Lora:  Thank you for introducing us to Lightman! Einstein’s Dreams is on my wish list now!

Laurie:  You’re welcome! So glad you both enjoyed it! Next: we’ll be venturing to Alaska in the 1920s to read Eowyn Ivey’s debut novel, The Snow Child. You’re in for another treat!