Discussion: Everything Was Good-Bye by Gurjinder Basran, Part 2

In Part 2 of our chat Alex, Lora and I discuss the unexpected twists and turns the plot takes in Gurjinder Basran’s debut novel, and how Basran’s writing steps up a notch to great dramatic effect. Spoiler alert! 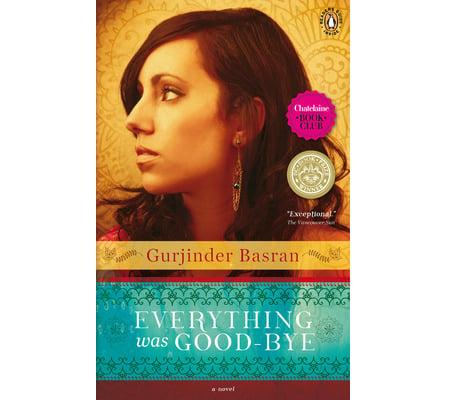 In Part 2 of our chat Alex, Lora and I discuss the unexpected twists and turns the plot takes in Gurjinder Basran’s debut novel, and how Basran’s writing steps up a notch to great dramatic effect. Spoiler alert!

Laurie:  Hello! So, Part 2 of Gurjinder Basran’s Everything Was Good-Bye.

Alex:  It feels like we have seen so much change since the first section. I can only imagine how it feels for Surinder, aka Meena (I cannot believe she had to change her name!).

Lora: That’s so symbolic, isn’t it?

Alex:  Ironic, isn’t it, given that her life’s never been less sunny. She’s less independent than ever before — running from one captivity to another.

Laurie:  It’s horrible is what it is. And that whole bit about her grandmother having said that a woman without a husband is nothing. What is with that whole philosophy? No wonder she’s screwed up.

Alex:  I like the way her new dad treats her, though. He’s the foil to that awful mother-in-law.

Laurie:  He’s not bad, although he does go along with the name-change thing.

Alex:  True. I don’t think anyone messes with that matriarch. She’s an ugly person.

Laurie:  And Sunny is such a spoiled brat.

Alex:  So controlling. And to hear that they bribed him into marriage! No wonder he feels he can have whatever he wants.

Lora:  I was so disgusted at that.

Laurie:  How could she have married him, even not knowing that?

Alex:  His mother made him a monster. Meena disagreed with the principle of not marrying for love, but she hoped it would be worth it.

Laurie:  But it’s the culture, too. And how could it be worth it? In what way? What could possibly be positive about it?

Lora:  I didn’t get a sense of exactly why she went through with it, other than wanting to please her family.

Alex:  I guess she saw it as a way to escape her mother. Well, that’s what Liam was asking her constantly.

Laurie:  She would have been better off with Kal or just moving out on her own.

Alex:  Yes, but she ‘s been beaten down by expectations for so long, she doesn’t know how to think for herself. It’s like that Stockholm Syndrome.

Laurie:  It’s hard to see how, with Serena’s example before her, she can’t see the situation for what it is.

Alex:  She loves to hate her culture and her mother and the repression, but she’s afraid to break out because she doesn’t know what life is like with no rules. She likes playing the discontented victim almost, a martyr in a way. That’s what Liam is trying to force her to think about. She needs a push. I hope that push is coming now that he has entered her life again and she has crossed a line.

Laurie:  The way he goes about it is a bit bizarre sometimes.

Lora:    I agree she needs a push from him, but he doesn’t really understand.

Laurie:  And she still freaks out and hides the minute an “aunty” enters the picture.

Alex:  He just disappears a week early and doesn’t bother to contact her AT ALL! I mean, he pulls the suffering student of life/struggling artist/philosopher thing a bit too much for my liking.

Laurie:  That’s what I mean. And he does things like just stop talking.

Lora:  I am glad to see him back in the picture, though.

Lora: I hope Liam makes an effort to understand what her life is like a bit more, but I’m not sure it would make a difference. And I love Kal!!!

Alex:  I’m not sure where Kal fits in at the moment.

Laurie:  Kal seems like the right guy for her. But she doesn’t feel it…

Alex:  Liam is the love that changed her. Sunny is the guy who represses her…

Lora:  But Kal is the one who has stuck by her.

Laurie:  It’s hard to get over that first love. But I’m not convinced Liam is the adult love for her.

Alex:  I think Kal could be the guy who saves her, because he’s close enough and acceptable enough that she could leave Sunny for him. Kal understands her. I don’t know if she will ever allow herself to be with Liam.

Lora:  I agree. Kal gets it. He knows what the life is like.

Laurie:  And I don’t know that ultimately it would work with Liam — he’s too moody. She needs a solid, there-for-her guy.

Lora:  I don’t think Liam and Meena are right for each other (I don’t care what they say her new name is, she’s Meena!).

Alex:  Too much water is under that bridge and, surely if she felt strongly enough she’d already be with Liam. She needs a solid, there-for-her guy.

Laurie:  That’s what I’m thinking. She’s outgrown him, I hope — he should be a fond, lovely memory and that’s it. Bring on the Kal!

Laurie:  Sunny will kill them, though.

Lora:  He is scary, isn’t he? The way his mood just darkens and he turns on her suddenly. The scene where he twists her wrist and then kisses it made my stomach turn.

Laurie:  But that happens before they marry. And she doesn’t RUN!!!!! And that whole thing with Jasmine!

Alex:  I know. I think she will come back into this. I am on the edge of my seat to see what happens when Sunny finds out about Liam.

Laurie:  Will he find out?

Lora:  All he needs is the aunty to tell him. I doubt he’d wait for an explanation.

Alex:  Yeah or to find another hair!

Laurie: It will be interesting to see. The action and writing in this section really flowed, don’t you think?

Alex:  Basran found her pacing and flow. I found things moving faster and the balance between description and narrative really good. The dialogue, too.

Laurie:  She definitely got into a rhythm.

Alex:  OK, the sex was very realistic — that part about them being most intimate when they let their guard down in the dark late at night.

Laurie:  It all worked better. And the dramatic tension really makes you want to know what will happen next.

Alex:  I hope we’re onto the phase of Kal.

Alex:  Haha! You’re not alone. Can I just quickly say how funny some of the contradictions in this section were — the cooking the onions outside?

Laurie:  And there were lovely metaphors: the idea of her mother not being able to drive on the highways, the depth of field Liam talks about.

Alex:  Absolutely. Basran is great at stopping time and imprinting these images on readers.

Laurie:  And there are so many questions: Will Meena break free? Won’t she? Will Liam help her? What role with Kal play? What will Sunny do?

Alex:  I can’t wait to find the answers!

Lora:  Hopefully they’re all answered by next time!

Laurie:  Next week we shall see in Part 3. Till then!