This week we chat about getting caught up in all the detail of Part 2 of Erin Morgenstern’s The Night Circus (pages 132-296) — not to mention the escalating love story and unexpected danger simmering beneath the surface of this circus of dreams. 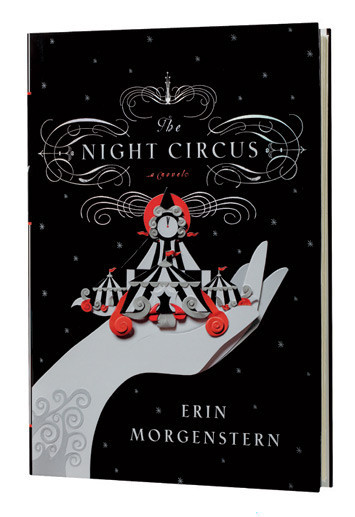 This week we chat about getting caught up in all the detail of Part 2 of Erin Morgenstern’s The Night Circus (pages 132-296) — not to mention the escalating love story and unexpected danger simmering beneath the surface of this circus of dreams.

Laurie:  So tell me what you thought about this, the second part of The Night Circus!

Alex:  I wish I were wearing a punch of red. Oh wait. (Puts on red hair band.)

Lora:  We should have matching red scarves, too! I am officially addicted. This part of the book has me completely hooked. Unputdownable!

Alex:  ABSOLUTELY! So much amazing detail.

Laurie:  It was interesting to find that now we’ve been captivated by the circus, just how dangerous it actually is — and how secretive.

Alex:  Is really starting to unravel, huh? I am nervous for Celia and Marco.

Lora:  I am, too! I’m wondering if anyone really wins at all in this whole thing.

Laurie:  After Tara, who knows what will happen? It all seems very tenuous — all bound up with ribbons and wishes.

Lora:  Not to mention Herr Thiessen!

Alex:  Even the people we least expected are involved.

Lora:  That whole scene was such a page-turner: Chandresh following Alexander, Marco following Chandresh, us following all of them!

Alex:  I know. It was like a hunt! Is Chandresh just crazy?

Laurie:  I take it Hector somehow convinced Chandresh to go after Alexander?

Lora:  Oooh, I hadn’t thought of that, Laurie! I thought Chandresh is just going mad, slowly, because of his close ties to the circus.

Laurie:  He’s going crazy because Marco has to make him keep forgetting things.

Lora:  I loved how Marco handled him when he found him going through his things.

Alex:  I kept thinking, why don’t Celia and Marco just do what they want and make everyone forget? But think how time-consuming that’d be!

Laurie:  It’s sad, really, how people like Chandresh are caught up in things, with Tara paying such a high price. And it costs Marco and Celia something, all the effort they exert.

Lora:  And slowly but surely, Celia and Marco are starting to realize how much everyone else is a part of their game.

Laurie:  Yes, they really have had no clue.

Lora:  I think it’s getting to Celia. Like she said, things seem to go wrong no matter what they do!

Laurie:  Everything is bound up in the circus and what they’ve created. And I think Isobel had way more sway over things than she realized.

Alex:  More than anyone realized.

Laurie:  That scene with Poppet screaming was bloodcurdling.

Lora:  I know! I feel protective over her and Widget.

Alex:  They seem to feel more somehow. I think Celia has real heart.

Laurie:  More than anyone realized, especially Marco and Celia. Poppet and Widget are special. And so is Bailey, somehow. It’s so sad he got left behind — wha???

Alex:  What happened there?

Lora:  I had tears in my eyes! Did they leave early because of what happened? Do you think he’ll set out to find Poppet? He said when he kissed her, he knew he’d follow her anywhere.

Alex:  I hope they find each other. That was sooooo perfect, and there was that line about leaving the sheep behind — it just seemed so poignant.

Laurie:  Speaking of perfect, what about those ball scenes with Celia and Marco and her dress changing colour? OOOH!

Alex:  And the details of their embracing when they went to fourth base.

Laurie:  Satisfying for you?

Lora:  Yes, it was beautifully written.

Lora:  I find myself blushing and giggling when Marco flirts with Celia. He’s so charming!

Laurie:  It does have that feel, doesn’t it? A real sense of love, flirtation and overwhelming feeling.

Lora:  I love how Celia is the only one who knows his real face, too — it’s such a perfect intimate detail.

Laurie:  That was perfect. The true self, and still loved. I love you just the way you are kind of thing.

Alex:  And he is actually in disguise when he wears it in the crowd. What a freaky detail to just drop in there: “Oh by the way, that’s not his real face,” and somehow Celia just KNOWS.

Lora:  Morgenstern was very clever with that. How Celia suddenly tells him to just stop it.

Lora:  I wonder what will happen to Isobel now.

Laurie:  That was sad, but something she knew, I think, all along. Certainly the cards kept telling her.

Alex:  Yeah, it’s really unfortunate, but she was not in the game. She couldn’t live up to Celia.

Alex:  Celia and Marco had been betrothed forever, too. Even if Marco wanted to, he couldn’t go against nature.

Laurie:  No. They’re all caught up in things and can’t change them in many ways. Even if they wanted to they couldn’t — remember the whole pain scene? They’re bound to each other and to the circus. And I don’t know what that will mean ultimately.

Lora:  So now I’m wondering who will win and what it will mean.

Alex:  I just can’t tell what is going to happen. It feels like everything is on the verge of collapse.

Lora:  And it’s all weighing on Marco and Celia.

Laurie:  The cracks are appearing, as Poppet said.

Lora:  Oh, Poppet. I think she might be my fave. (Aside from Marco, obviously.)

Alex:  I want her and Bailey to be together. (I am a hopeless romantic!)

Lora:  They will be! I think that moment when she kissed Bailey changed him — he can’t just let her go.

Laurie:  I agree! I love the different characters, and even though they’re not deeply explored, I love the way they work within the world Morgenstern has created and how dramatic it all is.

Alex:  Exactly, and it’s somehow becoming more dramatic, with the weather and the almost cult-like status that the reveurs are taking on.

Lora:  Yes! There’s Tsukiko, for instance. We know nothing about her, really, but I feel I know her. She’s mysterious yet familiar. She appears at some very pivotal moments.

Laurie:  There must be something to her. And she seems rather knowing, somehow.

Lora:  And her thoughts are so intriguing. Like when she points out that none of them are aging.

Laurie:  Yes! Or getting sick!

Alex:  She shines a light in the dark. How on earth can all these characters be brought out more and woven together?

Lora:  It’s almost like Morgenstern is friends with each character and has spent years getting to know them and what makes them who they are.

Laurie:  And she reveals just what she need to.

Lora:  But she knows all the secrets.

Laurie:  She’s like the Wizard of Oz behind the curtain.

Lora:  Yes! She is the Queen of the reveurs.

Lora:  And I cannot wait to find out more! This novel is such a page-turner — three hours flew by last night when I was reading.

Alex:  I know. It’s a crazy trick of the mind. I wish we could see into the future like Poppet!

Laurie:  Well, keep turning the pages! Next week, we talk about the conclusion.

Alex:  Also, I’m completely distracted from the fact that it doesn’t go into depth in different ways that I often like books to do. It’s magic!

Laurie:  Yes. That’s exactly the way I felt. So next week?