Alex, Lora and I marvel at Susannah Cahalan’s riveting tale of her devastating illness and how doctors struggled to determine what was wrong with her. 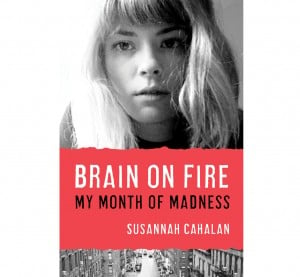 Brain on Fire by Susannah Cahalan

Alex, Lora and I marvel at Susannah Cahalan’s riveting tale of her devastating illness and how doctors struggled to determine what was wrong with her. This book has it all: suspense, drama and intrigue and will make you treasure every second you have with friends and family, and good health.

Lora:  I am SO excited to discuss this book!

Alex:  SO excited to discuss this book. OMG!

Laurie:  I’m so glad to hear you’re excited by the Book Club Picks! And this one is amazing!

Alex:  I have to say I had low expectations because I’m not really into non-fiction or medical stuff. At least, I didn’t think I was. But Susannah’s voice is just incredible. Her journalist’s background coupled with the emotional content of this very personal story struck the perfect tone for quickly delivered, captivating details. It is the book I have read the fastest all year. I felt like I learned so much, too. I am obsessed with this book!

Lora:  I am, too! I learned so much as well. Having an autoimmune disease and having spent a month in the hospital (for very different reasons than her), I felt like I could really relate to some of her viewpoints on medicine.

Alex:  I bet. And I had no idea of the intricacies of the brain. It was odd reading about it and imagining my brain firing more rapidly as I was being stimulated by her words. She made it feel like I was using my brain (and made me thankful for the fact that I was able to) and made this incredibly complex subject so accessible.

Laurie:  It was. I love accessible medical books, and I appreciate the way she made this almost mystery-like. The narrative is brilliant, and Cahalan’s story is just so amazing and unbelievable.

Lora:  The arc of the story was positively brilliant. It’s difficult to keep readers (especially skeptical ones like us) intrigued and engaged in a story of medicine. But it really did read like a mystery, didn’t it? You feel like you’re right there in the room with her family, trying to figure out what the hell is wrong with this poor girl.

Laurie:  It’s so perfectly dramatic. I think many people can connect to that sense of mystery and drama and imagine how it must feel to have your life change so dramatically so suddenly.

Alex:  Absolutely, and there is the added emotional impact when she is able to change the lives of others through her story, so it stops being about this one person, and about the future of thousands of people! It’s an incredibly poignant and personal story about one woman, but you can really feel the potential it has to impact the lives of so many others in the future.

Laurie:  So true. And while this is about one specific disease, and the known sufferers are really so few at this point, the idea of many more going undiagnosed is staggering. And there are others who have other autoimmune diseases that are much more widespread who are also undiagnosed or misdiagnosed, often for years or months. And the idea that you just can’t sit back and just trust the system, unfortunately, is provocative. Which so do just that.

Alex:  I had goose bumps on my LEGS reading the chapter where she visits Dr Najjar.

Lora:  It’s staggering to think of how many people go undiagnosed every year. I LOVED Dr. Najjar.

Alex:  I know! The way that Cahalan described him, how special he was. And she said so much by saying so little at the end about the inferior Dr Bailey—she went the show-don’t-tell route and just mentioned he hadn’t heard about the developments despite this being his field of expertise.

Lora:  I think she really hits on some important issues with the medical world and the unfortunate cases of the undiagnosed. People like Dr. Najjar are one in a million.

Alex:  Without pointing fingers, she is just so empowering, and it’s wonderful that that brilliant man also has a story.

Laurie:  Love Najjar’s story — that’s a book in itself!

Alex:  I liked also how the romance part between Cahalan and her boyfriend wasn’t played up too much. (I know neither of you ever expected to hear me say that!) It did leave me feeling a little like I didn’t fully understand the bond Stephen and Cahalan had initially, but I felt that probably reflected how they felt—because they didn’t exactly know where they were in terms of relationship status before everything unfolded.

Laurie:  When you go through a situation like this, you very quickly find out who your true friends are. Sounds clichéd, but it’s true. And they’re probably not always the people you thought they would be. Sometimes the most innocuous people step up to the plate, and others, who you thought would be there for you, don’t. Go figure. And Stephen totally stepped up.

Alex:  Very good point. And reading this reminds you how much you have to overcome your awkwardness and just be there for someone despite how awkward you feel. Like when Cahalan has people staring at her or saying the weirdest things. You have to treat people like human beings—and, if in doubt, make jokes about yourself.

Lora:  I’m just so utterly impressed with Cahalan’s reporting skills. To go back and figure out what happened over the course of a month by piecing together so many details.

Laurie:  Given the fact that she didn’t actually remember most of this time. To see videos of yourself and not remember it. So bizarre and scary.

Lora:  This might sound morbid, in a way, but I appreciated her comparisons to horror movies.

Alex:  I loved that detail. And her explanation that she cannot trust her own thoughts—she remembers hallucinations as if they were real.

Lora:  It makes you understand how scary it was for all of them.

Alex:  And how delicate everything is and how much we take for granted.

Laurie:  That’s it. Life is such a delicate balance and the tiniest thing can throw it off. There’s so much here: One woman’s story of identity, and the loss and regaining of it. The story of the failings and successes of the medical system. The idea that there’s so much we don’t know yet about the human body.  So, medical books: Good?

Lora:  I feel this book is in a class all its own.

Alex:  I am seriously a bit high from reading it. You know when a book excites you so much you almost feel giddy with excitement about it — I feel hyperactive!

Laurie:  Love that you feel that way! See, there’s something to be said for moving outside your comfort zone. First thrillers and Gone Girl, now this.

Lora:  I’m going to tell EVERYONE to read it!

Laurie:  Well, thank you once again, ladies. Next time, we’ll be chatting about our February Book Club Pick, Cathy Marie Buchanan’s The Painted Girls. Talk to you then!