The author of Cloud Atlas and The Bone Clocks chats to Laurie Grassi about his new and exciting experiences working in film. 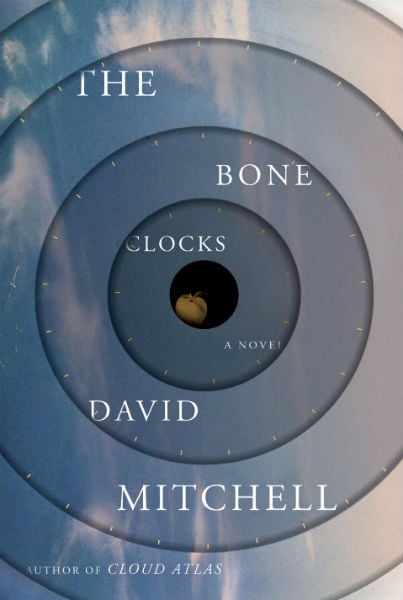 David Mitchell, author of Cloud Atlas, clearly shies away from being the centre of attention. After being bombarded with questions by the small group of journalists having lunch with him at a downtown Toronto restaurant, he turns the tables on us and throws out a number of questions of his own: What would be considered the Stonehenge of Canada? Which person best epitomizes the country? What books do you reread over and over?

“I’ve been talking too much,” Mitchell says, running a hand across his forehead. He admits he’s shy. Listening to him, you wouldn’t guess he’s also a stutterer. He speaks well. There are slight hitches to his speech, but it’s not clear if he’s giving himself time to get a word out or thinking about exactly the right word — this is a man, after all, who says the thing he loves best about writing is “The throb of fulfillment you receive from completing a fully formed, beautiful, flawless sentence.”

Once we head off for a one-on-one interview, though, Mitchell is more than happy to talk at length about his new book, The Bone Clocks, which offers the same multiple storylines and intriguing narrative that so attracted readers of Cloud Atlas.

At the novel’s outset in 1984, rebellious teen Holly Sykes runs off to her older boyfriend after a blowup with her mother. While on the road, she gets caught up in “a murderous feud between two groups of pseudo-immortals — one of which is more or less benign, and the other is decidedly predatory,” Mitchell says. “Holly is initially a mind at peace in the bloody chess game being waged between these two groups, but in the end she’s a decisive weapon.”

Among the host of characters in the book are some readers might recognize — including Marinus and Hugo Lamb — they’ve shown up in other Mitchell novels. He admits to a variety of reasons for such reappearances. “It’s fun,” he says. “It appeals to my vanity. Because of envy — I look at the characters of Don Draper or those on The Wire or The Game of Throne, the number of hours they get and the complexity and subtleties with which they can be fleshed out. I want to do that, too. Cowardice — I never have to say goodbye to anybody. There’s always the hypothetical possibility of resurrection in a future book.”

Does Mitchell think of his work as writing one long extended book rather than a number of separate ones, perhaps?

“It feels like I’m making a universe,” he explains. “I didn’t start out doing that. This is an accidental consequence, not far from whimsy. It’s important the books are stand-alone individuals in their own rights. I don’t want to get into series and sequels, or only of the very loosest types. That’s why Marinus’s status as an atemporal is not referred to by anyone in The Thousand Autumns of Jacob de Zoet, but why he’s so nonchalant about dying. He knows in 49 days he’ll be back in one form or another. And we get to see what happens in The Bone Clocks.”

The resurfacing of characters handily ties in with one of Mitchell’s recurring themes: that of reincarnation, which he readily confesses he doesn’t actually believe in, though he does admit there is “solace in the notion we can have another go and try and fix things and make a better job. Reincarnation is a useful idea.” And he concedes, “Even in one life we metaphorically die and are reborn a number of times. I’m not getting religious or New-Agey or anything here,” he adds, his eyebrows raising comically. “The first time you’re unceremoniously dumped is a kind of death. And you come back from it. Marriage — one former way of life has to die to make the marriage work.”

Complicated storylines in books with characters who reappear and are reborn are one thing; transferring them to the big screen is another. Many insisted Mitchell’s 2004 novel Cloud Atlas was unfilmable, with its facing-mirrors structure, science fiction aspects and historical timelines, among other things, but Tom Twyker (Run, Lola, Run) and Andy and Lana Wachowski (The Matrix) bravely tackled it.

“It was fascinating,” Mitchell says of his incursion into the world of filmmaking. “I was lucky they wanted to honour the spirit of the book. There are anthropological limits, biological limits to watching a film that made it necessary to impose fairly major changes. However, I recognize the rational behind the logic of them. And no one forces you to sign option papers at gunpoint.”

Did anything surprise him about the process? “The biggest wow moment was a read-through before filming. The actors assembled in Berlin. A couple couldn’t make it, so I had some parts. It was like at school when you’re reading The Crucible and you all have a part, but instead of this classmate and that, I’d read a line and then Hugh Grant would read a line, then Tom Hanks, then Halle Berry. And I was thinking, ‘Is this actually happening?’” You can tell Mitchell is still thrilled by the experience.

There isn’t talk yet about whether or not The Bone Clocks will find its way onto film, but certainly its straightforward chronological structure would lend itself much more readily to the process.

Ideas for his next book are already floating about in Mitchell’s head and are written down in a brief proposal. “I have a three-book contract, so I had to scribble something down,” he confesses, almost guiltily. He’s bookmarked settings from The Bone Clocks that might play a role in it — the Greek café where Holly and Marinus meet and the residence in New York inhabited by the good guys or horologists, so readers can be assured they’ll see some familiar faces again.

We end the interview talking about the unexpected — apt since that’s a great strength of his storytelling — and I ask what people would find surprising about him. “I am really a bloody good table tennis player,” he says, rather pleased. “Not professional, but amateur. So watch out!” Somehow, the ability of this man to keep a single ball in play doesn’t surprise at all.

David Mitchell will be be appearing at IFOA in Toronto on September 20th and at The Vancouver Writer’s Festival on September 27th.