A Devastating Disease Was Taking My Husband Away From Me, Piece By Piece

In her poignant new memoir, author Alison Acheson talks about the ongoing grief she experienced caring for her husband during his short illness with ALS. 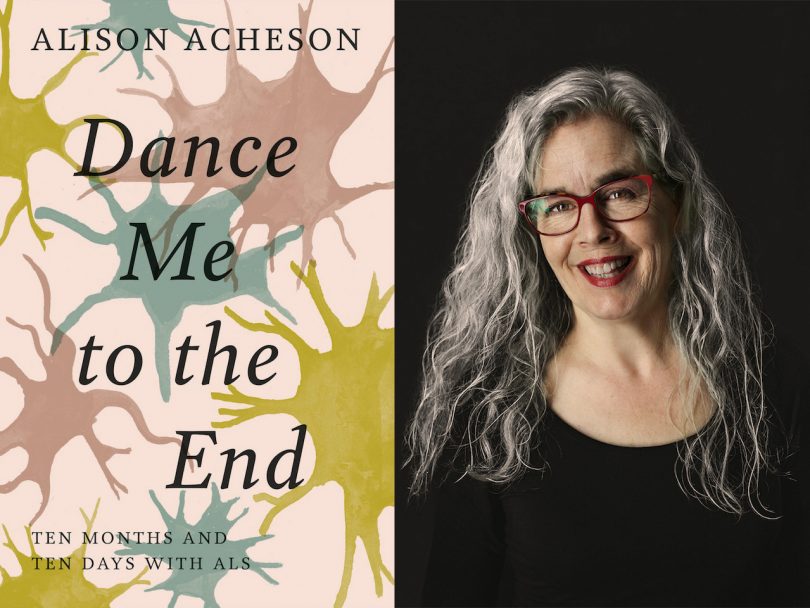 Alison Acheson’s husband, Marty, was diagnosed with Amyotrophic Lateral Sclerosis at age 57. Acheson kept a journal, detailing his illness, rapid deterioration and eventual death just 10 months later. This excerpt is taken from her new memoir Dance Me to the End.

Deep into the fall, a number of elements came together. Or apart. Golf game over, Marty’s ability to drive the car gone. In spite of me finding a warm and light winter poncho for the borrowed wheelchair, he had no interest in going back outside. Except for the occasional trip to hospital, we were relegated to being inside the house.

I found this difficult, even as I struggled to make it to my two or three teaching sessions each week. I left the house as late as I could and returned as quickly as possible, and had teaching assistants or guests lecture for me often. I checked texts from home throughout the last bit of class time, and would receive messages that threw me into a panic. I did speak with the chair of the program about finding a replacement to complete the workshop class, and schedule this person to take over for the second half of class in January; I’d come to terms with the fact that I was going to need a full leave soon.

Some changes were pushed at us, and others we rode with in some way. At times, Marty initiated the changes. So, there came a day when I placed food on the small table that he used to eat from, expecting him to move the table into place as he had to that point. Instead, he stared at me, wordlessly asking me, expecting me, to move it.

I did, with an unsettled feeling. Did he need me to move that table? Or was he relinquishing something? If so, what? His autonomy, certainly. What else?

I felt servile in that moment, and there was a question in my mind about the necessity of the request. I had no problem with giving and helping and being generally useful. But. There was a “but” in my mind. This smacked of not even being taken for granted, but being deliberately pushed, asked of. I moved the table, but wasn’t happy about it.

When should someone give up? When should someone expect others to do for? How judgmental was I being? Should I have offered? Why was there a twinge within me of feeling badly that I hadn’t offered? Why would I have offered? How to recognize when someone needs help. Yet if they ask for it, surely they need it. Where are all the lines between two people, in communication, miscommunication, expectations, helping, being helpless, understanding? I could go on. All these negotiables that occur through the day, some resulting in hurts, some in minor joys. Maybe it was nothing beyond asking for a table being moved, something he felt he needed just in that moment.

That undercurrent, a coming to pieces—at this point, I didn’t so much as articulate this to myself—and I countered it with mental images I would run through my mind, to remind me of the man who shared my home, with his face that showed less and less of what he was feeling, and his slowed body. I would close my eyes and envision his expressions of happiness in our past, his smile, his quick laugh. The way he’d walked or set his hands on his hips while listening to someone speak, the way he held a cigarette or crossed his legs while we sat at the fire. The way he played guitar. As the months passed, I ran such images through my mind several times a day. Remembered who he’d been. Who he still was, now trapped.

When friends and acquaintances, even relatives, learned that I was working on a piece about caregiving, a surprising number of them asked me this: “How do you not hate the person you are caregiving?” Maybe they meant words like “not resent.” But what came out was the word “hate.”

The first thing that came to mind in answer to this were those mental images. The images helped stave off the negatives. They served to soften my heart. Softer things might not be so brittle, might not break so easily.

I awoke in the middle of the night to find my husband’s neck and back wet with tears, lying beside me. He must have been lying on his back, and rolled away. Which was not easy.

I rubbed his back until his breathing settled to deep sleep.

I’d been in early motherhood mode through all these months, awakening immediately every time he stirred, or left the room to go pee. I hadn’t been in that mode for so long, for so many years, all so passed now, yet here I was again. No thought put into it even—just an old pattern emerging from shadows.

This essay has been adapted from Dance Me to the End: Ten Months and Ten Days with ALS. ©2019. Published by Brindle and Glass. All rights reserved.