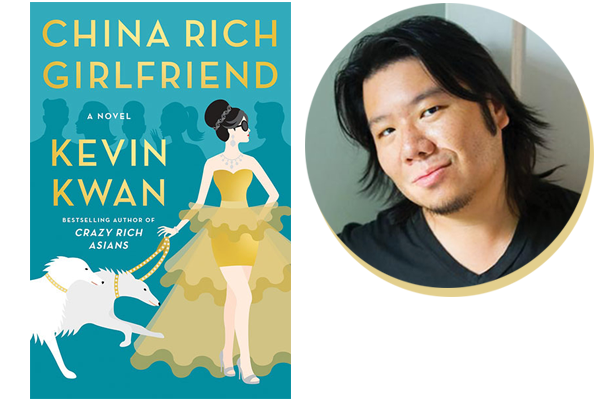 In China Rich Girlfriend, the follow-up to his 2014 bestselling debut, Crazy Rich Asians, Kevin Kwan gives readers another voyeuristic peek into the mega-opulent lifestyles of Asia’s hot young nouveaux riches. We chatted with Kwan about the cross-cultural truths buried under all that cash.

What made you want to explore the extravagance of China in particular?
When I was a child growing up in Singapore, mainland China was always closed to me. But as the Chinese economy opened up, the excess I discovered in Shanghai was jaw-dropping. China now has more millionaires than any other country. People in their 30s are buying Boeing 747s and turning them into private flying palaces with mah-jong rooms and karaoke lounges. It’s challenging to tell these stories without seeming campy. The scale is just so off that it was begging to be explored.

China Rich Girlfriend features the same characters from Crazy Rich Asians. What more did you want to mine from these personalities?
I always intended on writing a trilogy that explored different parts of Asia through [protagonist] Rachel’s eyes. In book 1, she finds out the truth of her origins in mainland China, and in book 2, she’s going to explore this world. There were many stories I felt I had just begun to tell, and I wanted to deepen them. I will go even further in the third book.

You’ve hinted that you grew up in — or were somehow a part of — these well-off circles. Are your books art imitating life?
Definitely. Many of the events in these books are lifted from direct observation. I grew up in an old, established Singaporean family, and everyone around me was super-rich or knew someone who was. I used to visit mainland China every couple of years, and I’d see these exponential leaps in fortunes. Your friend is driving a Mercedes one day; then three years later he’s driving a Rolls- Royce. The only way for me to express it is to satirize it.

Wealth drives the plot of China Rich Girlfriend, but it’s not just about fancy cars, booze and crazy weddings.
Rich people have a lot of problems. In my books, the older generation of the Yeung family is controlling the purse strings. Or in [character] Astrid Leong’s case, she’s got so much more money than her husband that it’s thrown off their dynamic. But if you take away the money, their relationship still represents the same struggles between mothers and sons and fathers and husbands and wives. So many readers have reached out and said they could relate to these characters. They might not have a billion dollars, but they felt like, “Oh my God, this is my mother” or “I have a crazy cousin just like this!” The books have been able to transcend many different cultural barriers.