Read an excerpt from this month's book, The Secret of Magic!

A woman's search for answers about a black soldier's death will open your eyes to truth and love. 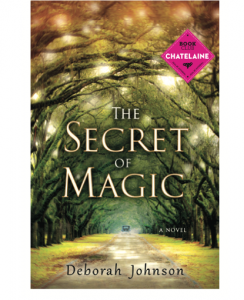 Missed the Chatelaine Book Club review of The Secret of Magic by Deborah Jonson? Get it here.

Reprinted from The Secret of Magic by Deborah Johnson by arrangement with Amy Einhorn Books/G.P. Putnam’s Sons, a member of Penguin Group (USA) LLC, a Penguin Random House Company, Copyright © 2014 by Deborah Johnson.

“You all right, mister? Need any help?”

Did he need help?

He opened his eyes then, but he didn’t turn them to the voice, didn’t answer it, because it was a child’s voice. Light, like L. C.’s voice had been in the dream. And Joe Howard didn’t want to go back to the dream. Instead, he put a hand on the hard thing right in front of him and realized it was nothing more menacing than a window and that this window was on a courier bus and that this courier bus was passing through Alabama on its way to Mississippi, and that it carried him home.

Outside, it was coming on night. Twilight. “The magic time,” his daddy called it, “the make‑a‑wish moment between the dark and the light.”

And the dusk, the gritty Southern grayness of it, its harsh gathering, stopped Joe Howard from seeing out beyond the solitude of his own reflection, a soldier’s reflection: dark hair, a trimmed mustache, eyes he didn’t bother looking into, and farther down from them, the ghostly shadow of a khaki uniform, of lieutenant’s bars and a medal. There was no brain, no blood, no bone, no friend called L. C. Hoover sprayed all over this Joe Howard Wilson—at least not anymore.

Other than that, it was already too dark to see much of anything, but Joe Howard didn’t mind. This land wasn’t foreign to him. It wasn’t war. It wasn’t Italy. He knew the ways of it, the slow progression of Alabama as it gave way to Mississippi. At its own pace, red clay soil gave place to black, trees grew greener, hills flattened themselves into plain and prairie, into delta.

At last, Joe Howard turned to the boy. They’d been sitting side by side since the two of them had gotten on the bus together in Birmingham. He had promised the boy’s mother to see to it that her child got safely to Revere, Mississippi, all in one piece. The boy’s mama, who had worked at the Mobile Dry Docks during the war, was on her way out to Oakland, California, to see what the world might hold for her there. She was sending her son back to her parents in Macon, Mississippi, for what she called “The Duration,” until, she told him, she could get herself established.

No way was she ever going back to Mississippi to live. No way was she going to have her son grow up there. Onto the front of his clean overalls, she had pinned a piece of sack paper with his name on it. Manasseh. “Came straight out of the Bible. Revelations,” the boy had told Joe Howard. Below that came Manasseh’s granddaddy’s name, Preacher Charles A. Lacey, and his granddaddy’s address, Short Cut Road, Macon, Mississippi. All of this neatly spelled out in looping capital letters. Manasseh still held tight on to the lard can that had once contained his lunch—a cold baked yam, some corn bread, a Ball jar of sweet tea that he’d offered to share. He was working on the stick of Juicy Fruit gum Joe Howard had given him as the bus pulled out of Birmingham. The taste must have long since been played out of it, but still the boy chewed on.

Manasseh had politely motioned Joe Howard to the window seat. His eyes rounded as he stared at Joe Howard’s uniform, at his bars, at his medals. He didn’t need to see out, he’d said. Joe Howard didn’t tell him that when he was a boy, when he was this boy’s age, he’d made this trip many times himself.

“I’m well,” Joe Howard said now, finally answering. He yawned, looked out the bus window again. He might know Alabama, but he didn’t recognize a thing. “Where are we?”

“Aliceville?” Joe Howard thought he’d remember every little town they’d pass through going from Tuscaloosa to Revere. Carrollton, Gordo, Reform, Vernon, Mitchell, but he couldn’t for the life of him place Aliceville in the mix.

“They said we had to make a detour. I heard the bus driver tell the white folks that.” The words lisped out of Manasseh’s mouth through the space of two missing front teeth. Joe Howard didn’t have much experience with children, but he guessed this boy must be about six. The same age he’d been in the dream he’d just had, and the same age L. C. had been in it. He knew that when he told his daddy this, his daddy would assure him, with grave wisdom, that sitting next to Manasseh had summoned poor, dead, blown-​apart L.C. to his mind.

“Called him back.” His daddy, Willie Willie, would have nodded sagely as he said this. His daddy with his old-​timey, magic ways.

Joe Howard looked past the boy now, to the front of the bus. The colored section was full, but there weren’t that many white folks. No other uniforms, either. Since the war, Joe Howard noticed military uniforms as quickly as he noticed skin color, and as necessarily. Army, Navy, Army Air Corps, Marines—it didn’t matter. They all made him feel safe. But there was no serviceman, no ex‑serviceman,

on this little interstate vehicle, making its slow way from east to west and south.

Instead, there was a young redheaded woman with two little boys. Twins, probably—at least they looked that way to Joe Howard. The driver took his eyes off the road and turned back to say something to her. She was right up at the very front of the bus, and so Joe Howard couldn’t see her face, but the flow of her hair was pretty, the way she’d tied it back with a dusty pink bow, the way it danced around when she tossed her head. Joe Howard saw this but lowered his head, glanced quickly away. He did not want to be caught staring at a white woman.

Her children saw him, though; they watched him—those look-​alike, little twin boys, who had on identical shirts and brown short pants, gray sweaters. Without a word, now that they had his attention, they got up and started to the back of the bus, jostled side to side and against the seats by its movement. When they reached Joe Howard, they still didn’t say anything, but they stared at his uniform, at the lieutenant’s bars on it, at the medal, just like Manasseh had done. Then, together, they looked up into his face.

Joe Howard reached into his pocket and pulled out his yellow pack of Juicy Fruit. He offered each boy a stick and each took one. He thought their mother, who was looking back now, would call out to them, would stop them from taking something from a Negro. But she didn’t.

It was the bus driver who shouted out. “Hey, Henry! Hey, William!” Preening, Joe Howard thought, with the knowledge of their names. “Come on back here!”

He watched the boys go to their mother, not to the man. He watched her lean each boy close to her and kiss his cheek, ruffle his hair. And he thought: I wonder what it would have been like to have a mother. But then, just as quickly, the thought was swallowed up by a burden of love for his daddy. That burden was always with him. Joe Howard said aloud, “I got to call him. Let him know I’m close now, almost home.” His daddy was a good son of Mississippi, and, as such, he held Alabama at a distance but always in shadowed, distrustful view.

The first time Joe Howard had crossed the state line going east, he’d been maybe a little younger than Manasseh, five years old. His daddy had been driving the Cackle Crate then—probably he was still driving it now—and their green Ford pickup had been following a Ford pickup just like it, except for its brown color and its Alabama license plates. Revere was the last Mississippi town you went through before you got to Alabama, and the two of them, Joe Howard and his daddy, had been on their way to Tuscaloosa so that his daddy could buy him some new school shoes. His daddy traded only where they let you come in, make your pick, try on what you wanted. Like a man. Like the special man Joe Howard would grow up to be—his daddy knew it! But there were no stores like this in Revere.

The truck they followed had had thirteen Confederate flags on it, if you counted all the decals. And Joe Howard had counted them. He knew all about the Stars and the Bars. Judge Calhoun had already brought him into Calhoun Place and shown him the flag that the judge’s own granddaddy, Colonel Robert Millsaps Calhoun, had managed to scavenge out of the shambles that had been the Battle of Gettysburg. Sitting under that flag, teaching him how to read, Judge Calhoun had told Joe Howard about that great war, that righteous freedom-​seeking war. His bourbon breath had been warm upon the names of General Nathan Bedford Forrest, and General Stephen Lee and General William Barksdale, warm upon battles lost at Vicksburg and Jackson and Shiloh—fought, actually, the judge assured Joe Howard, for the armaments and the train depot here in glorious Mississippi, right up there at Corinth—conjuring myths that beatified soldiers and made them heroes, and canonized their glorious lost cause.

“And not a black man among ’em. Not in any of the tales the judge might be telling. Not in anything he has to say. Not down here,” Joe Howard’s daddy had whispered, tucked in tight beside him on their shuck-​stuffed mattress, on their tiny bed at night. “Don’t worry about it, though. You’ll be the first. You’ll be in the history book. I’m seeing straight to that.”

So when Joe Howard had signed up at eight o’clock on the morning of December 8, 1941, for the Army, both his daddy and the judge had each thought he knew why, because of coming glory on the one side and past glory on the other.

But they’d both of them been wrong.

Follow us at Twitter.com/ChatReads for giveaways, author chats and more!