In this passage from Barbara Mutch's new novel, The Housemaid's Daughter, which begins in 1920s South Africa, the innocent young Ada struggles to understand where she belongs in Cradock House. 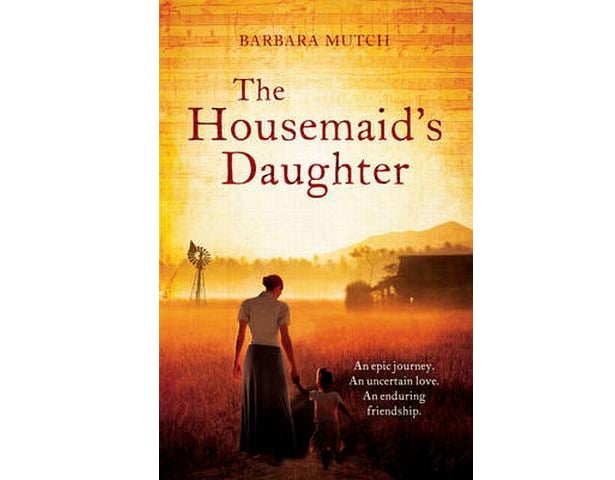 In this passage from Barbara Mutch’s new novel, The Housemaid’s Daughter, which begins in 1920s South Africa, the innocent young Ada struggles to understand where she belongs in Cradock House.

My mother Miriam never went to school and neither did I. Mrs. Pumile never went to school either. There was a small school in the Lococamp township that served the railway workers across the Groot Vis, but the children there were always dirty and played wild games, my mother said. A bigger school lay in the township on our side of the river beyond Bree Street. It was called St James and it was run by the Rev. Calata. It had sports fields and a choir and it looked away from the town and towards the open veld. It was much more strict, Mama said, and that was a good thing for a school to be, but it was too far for me to walk to such a strict school on my own.

We didn’t go across the Groot Vis often, only on Mama’s Thursday afternoon off, when we went to visit her older sister, my aunt. ‘So many people,’ Mama would gasp, perhaps reminded of her old KwaZekhele days, as we pushed across the bridge. ‘Stay close to me, child.’

Auntie lived in a mud hut with no door and she had to wash her clothes in the river. Bad people came and stole the drying clothes off the bushes along the riverbank when Auntie went home for the next bundle of washing. Auntie washed for a living. In the matter of schools, Auntie agreed with Mama that the Lococamp school was not to be trusted. Auntie said it was as rough as life on the riverbank.

It fell to Madam and Master to talk about a school for me.

‘Edward,’ I overheard Madam say one day as I was coming out of the kitchen carrying the ironing for my mother, ‘we can’t ignore it, we have a duty. The township school is too unsettled, perhaps Lovedale Mission?’

‘It’ll only lead to trouble later on, expectations and whatnot,’ said Master Edward, flapping a page of the newspaper over. ‘But look into it if you must. Will you play the Beethoven for me this evening?’

I don’t know what ‘trouble later on’ Master was afraid of. And going to the mission school might have meant leaving Cradock House and leaving my mother, who needed me to help her as she got older and smaller, like a bird, while I got bigger. It seemed to me that life was strange in the matter of size, but maybe it was
meant to be that way; you grew from a tiny baby into a tall grown-up and then you shrank until you died and were small enough for God the Father to deliver you to the ancestors.

‘I’m grateful, Ma’am,’ Miriam said to Madam when the
subject of school came up again. ‘But Lovedale Mission is far away and Ada would be alone.’

Leaving to go to school, and leaving to go to Africa must be about the same, I calculated, hiding behind the door while Madam and Master talked one evening in the lounge. Both meant losing your family and never seeing them again. I didn’t want to lose mine, like Madam had lost hers. I watched through the crack above the door hinge. Master was reading the paper and Madam was shaking her head. The round green stone she wore at her neck caught the lamplight. She had changed from the loose, low-waisted dress she wore during the day – Madam’s day dresses were made to withstand the heat, and were the colour of cream on the top of milk – into a fitted one in pale green to match her brooch.

‘I’d like to get her into the children’s school here in town but the head won’t hear of it,’ she said. The stone flashed at me again. I didn’t know what it meant when people wouldn’t hear of things. I didn’t think it had anything to do with being deaf. ‘Why is everyone so difficult about this, Edward?’

‘For the simple reason, my dear,’ Master said, frowning at her over the top of his newspaper, ‘that if you let one in, they’ll all want places.’

He didn’t answer but instead turned another page, his dark head with its side parting disappearing behind the paper. I don’t know what he meant, or what Madam meant. But I don’t think Madam agreed with him. Perhaps she didn’t understand the trouble he said he was afraid of later on if I went to school. The trouble that I didn’t understand either. I would never want to cause Madam and Master any trouble. If going to school meant trouble, then I should not go.

I watched as she stood up, looked out of the window for a moment, then walked over to the piano. When there was silence between Madam and Master, she would often go to the piano. Sometimes she played straight away, and sometimes she sat stiffly, staring at the keys.

‘Ada!’ hissed my mother, pulling me away. ‘The tokoloshe comes for bad girls that listen at doors!’ I ran back to our room and lay down, covering my eyes so I couldn’t see the evil tokoloshe when he crept on to the bed and took me away to hell. But he didn’t come. And Madam played Beethoven. The Moonlight Sonata. But she was distracted, I could tell. I could hear it in her fingers.

‘The child can learn all she needs here, Madam,’ Mama said firmly the next day as she looked for elastic for young Master Phil’s garters in Madam’s sewing basket. My mother had given me a talking-to when she later came to bed. She said that I didn’t
deserve Madam’s kindness if I listened at doors. And that she wouldn’t have my schooling bothering Madam and Master.

Madam pushed her needle into young Master Phil’s sock that she was darning. There was always a lot of sewing to do with young Master Phil. He seemed to be able to walk out of the house and tear his shorts or lose a button straight away. But all boys tore their clothes, Mama told me. It’s what boys do. But it didn’t seem to matter, for we all loved Master Phil, who was
as sunny as Miss Rose was forever peeved.

‘We’ll see. I won’t give up just yet. You didn’t have the chance for school, Miriam dear, but Ada should.’

But I never went to school.

Instead Madam started to teach me my letters at home at the dining-room table when Master was at work and the children were busy. I don’t know why she wouldn’t teach me when Master was at home, but that was the way it was. We always had to pack up very quickly when Master’s footsteps were heard coming down the path. And my mother Miriam and Mrs Pumile from next door clapped their hands and said I was very lucky to be getting something they called an ‘education’.

I began to read from the book Madam left in her dressing room as well, on the table next to her silver brush and her powder box where I dusted every day. No one else saw that book, not Master or Miss Rose or young Master Phil. I knew this because I could tell from the outline it would make in powder or dust if it
had been moved by anyone apart from Madam and myself. I watched for this every morning when the sun came through the window and fell upon Madam’s dressing table in a revealing, yellow beam. And I made sure to put the book back to the page she’d been writing so she would never know.

There were often sentences that I didn’t understand but I could think about them all day as I went about my dusting and polishing, and sometimes the meaning that had been hiding within them would jump out at me long after I had read the words. Musical notes, I later discovered, were also like words: they meant one thing when played on their own, and quite another when strung together.

I don’t think that Madam knew I was reading her book, but maybe she did. Was that why, many years later, she left the book behind when she went away to Johannesburg? Left it for me? After all, without Madam and the children, Cradock House would be empty and silent. There would be only my footsteps
and Master’s footsteps on the narrow stairs.